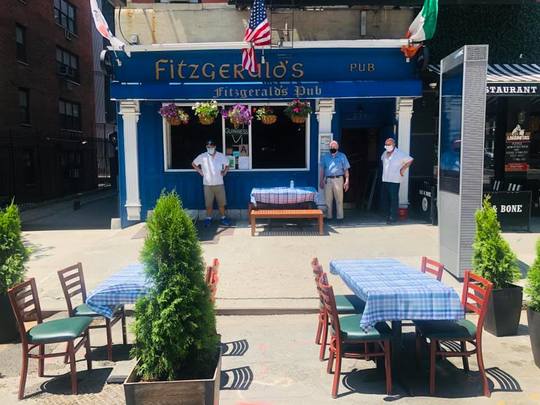 Fitzgerald’s Pub on Third Avenue and 25th Street in New York and its outdoor setup.

After weeks of COVID-19 lockdown, New York’s Irish bars and restaurants have begun the slow but steady process of re-opening their doors to customers for outdoor dining, and the response at one of the best-known establishments, Rory Dolan’s in Yonkers, has been brisk.

Rory Dolan, the Cavan-born owner of the 26-year old pub, restaurant and catering facility on McLean Avenue in Yonkers, told the Irish Voice that he was able to set up 300 seats for outdoor dining in the parking lot adjacent to his building and that the community has responded overwhelmingly since Rory’s reopened on Tuesday, June 9.

“It’s been great. I put up a marquee and lights around the place to make it inviting. We had a very busy week last week, especially for Father’s Day,” Dolan said.

“People are just thrilled to be able to go out again.  I’ve seen some customers back three times within the past 13 days.  So it has worked out well for us.”

Rory’s is offering a limited menu seven days a week, opening at 3:30 p.m. on Monday through Friday and 12:30 p.m. for the weekend.  Social distancing guidelines are firmly in place, he says, “because it’s as simple as this – we must follow the rules.”

Some customers arrive without face masks which are mandatory.  “I’ve given out at least 300 of them. Some people just forget them, and some people don’t wear them because they are outdoors. But everyone has to have one,” Dolan adds.

Rory Dolan’s shuttered in mid-March, and save for a brief try at curbside dining remained close until the start of outdoor dining.

“We tried the takeout dining for a couple of days but it didn’t really work for us,” says Dolan, who used the time off to fix up the interior of his establishment.

“I sanded the whole place down, revamped it a bit. It was a very frustrating time for sure but we kept thinking that we would get through it, that we have a great following after so many years.  The phones kept ringing when we were closed, people wanting to know when we’d be back.”

Dolan estimates that he’s re-hired about 60 percent of his staff, and hopes at some point to be back to where he started.  With 50 percent indoor dining the next phase on tap this week for Westchester County, that could be soon.

“The customers have been so great. We have a smaller menu for the time being, and sometimes it’s been hot outside, but we haven’t had a single complaint.  The people are great. It will be good to get back inside too, but it will be extremely important to follow all the rules so that it works for everyone. There’s no getting around that,” Dolan says.

Mary Carty, who owns the Keg Room on West 36th Street with her husband Joe, and also the Rambling House in Woodlawn, told the Irish Voice that the Keg Room had a quiet Monday, the first day that outdoor dining was allowed in Manhattan. But resuming operations felt great. 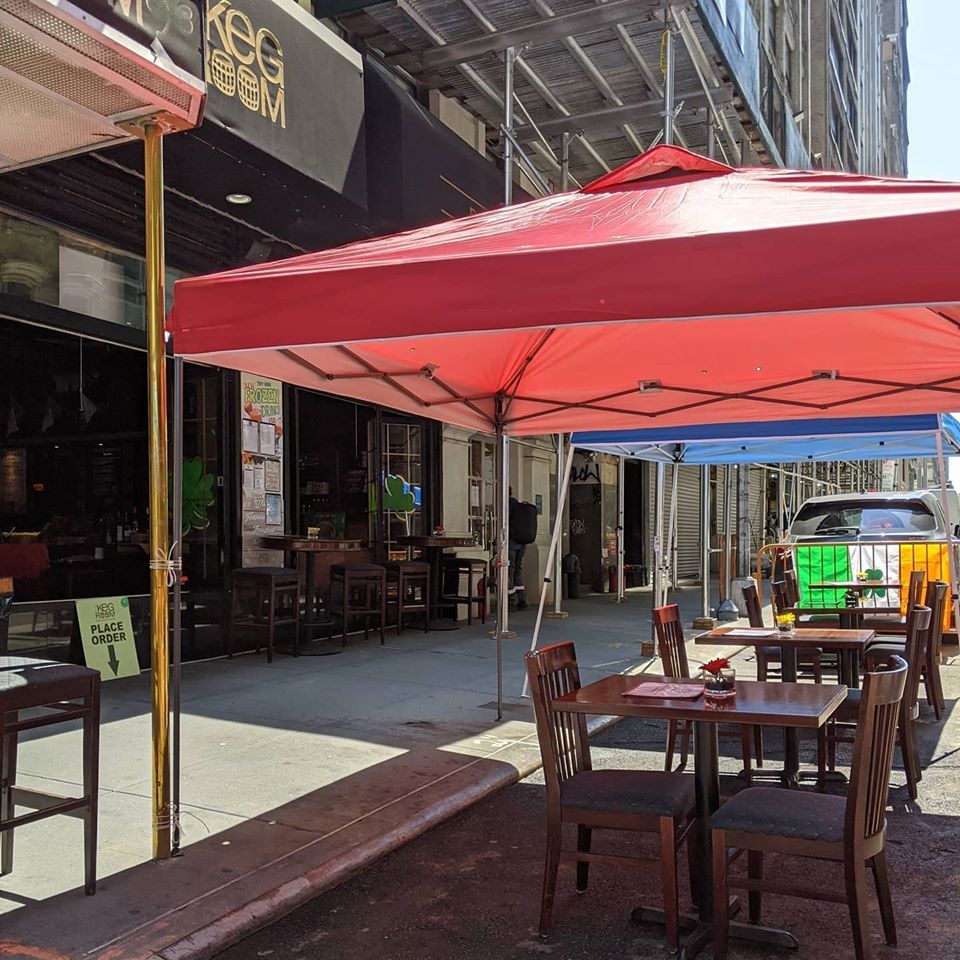 “We have sidewalk tables and it was hot on Monday; now we have umbrellas,” she said.

“But we are not coming close to breaking even. We had 45 staffers, 33 of them full time. Now it’s just a skeleton crew.”

The Keg Room’s efforts to get back on its feet were delayed by the looters who used the Black Lives Matter protests as an excuse to cause property damage.  The staff had been offering curbside takeout but had to stop and board up the premises when the protests were at their peak.

The Keg Room was a go-to place for many occasions – concerts and games at nearby Madison Square Garden, viewing live games from Ireland – and Carty is determined to build her business back to where it was.

“We were doing really good. But it is going to take time to get back. At least we are healthy, that’s the important thing,” she says.  “We will get there.  It’s sad because there are many places that won’t make it.”

Sinead Brogan, the owner of Katie’s Cottage in Yonkers, had to close up in March just as her major renovations were coming to a close.  Katie’s remains closed as the back deck is nearing completion, and she hopes to open in the next two weeks for indoor, outdoor, and sidewalk dining.

“We’ve been so happy because our customers have stayed in touch with us when we were closed. We will have dining soon.  Maybe even music outdoors but I’m not sure how that would work yet.  Lots of the bands have been calling us,” she says.

“We’ll stay on top of things as regards to the guidelines and start the process of getting back to normal.”