Former US Navy SEAL Frank Larkin highlights the seriousness of traumatic brain injuries (TBI) and how they played a role in his son's suicide. 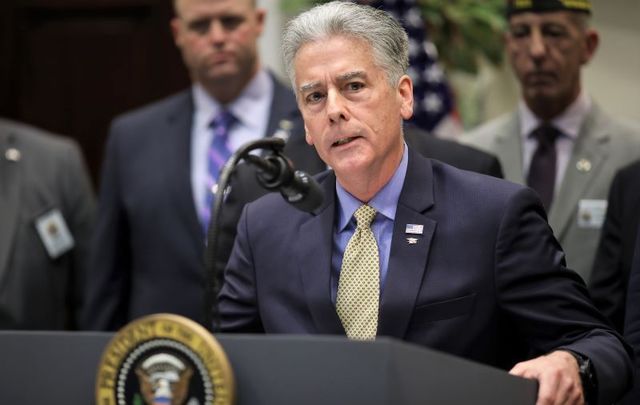 Frank Larkin’s son, US Navy SEAL Ryan Larkin, committed suicide in 2017; his family believe it was a result of an undiagnosed traumatic brain injury he sustained while serving

When Irish American Navy SEAL Ryan Larkin took his own life in 2017, his family knew it had to do with post-traumatic stress disorder, as well as an undiagnosed traumatic brain injury (TBI) he incurred during one of his four tours in the Middle East.

Now, Ryan’s father Frank, also a former Navy SEAL who has previously served as the US Sergeant at Arms of the US Senate, is addressing President Trump’s recent remarks that downplay the seriousness of TBIs.

In a January press conference, President Trump responded to reports that 34 military service members suffered a traumatic brain injury by saying: “I heard they had headaches and a couple of other things, but I can report that it’s not very serious.”

The President followed up saying: “I don’t consider them severe injuries relative to other injuries that I’ve seen."

In response to Trump’s comments, Frank Larkin, an advocate for returning veterans, issued an open letter to Trump on January 23. In it, Larkin wrote in part: “On March 5th, 2019, I stood beside you outside the Oval Office as you signed the Executive Order for the President’s Roadmap to Empower Veterans and End the National Tragedy of Suicide (PREVENTS).

“I shared my son Ryan’s story, who following 10 years of valiant service to this nation, much of his time in combat, struggled with post-traumatic stress disorder, moral injury and other challenges. He took his life one morning clothed in a SEAL Team shirt and red, white and blue shorts. Next to him was a shadow box that captured his numerous awards, unit insignia, and his revered Navy SEAL ‘trident’ pin.

“Every day Ryan suffered from a headache and struggled to understand what was wrong with him. After his death, we learned that he had an undiagnosed microscopic level of severe brain injury directly related to military blast exposure. My son was a sniper and an explosives breacher, where he was constantly exposed to the concussive effects of high-powered weapons and explosives. 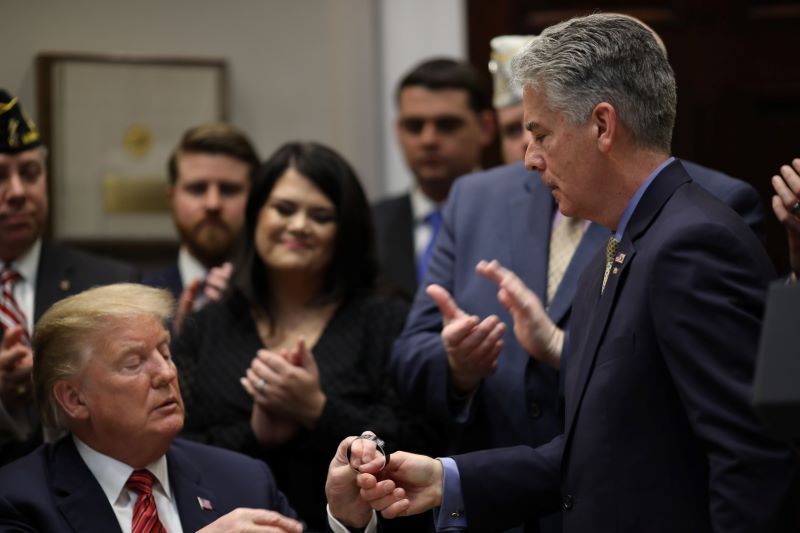 President Donald Trump receives a memorial bracelet of Navy Seal Ryan Larkin, son of Frank Larkin (R), a retired Navy Seal, during a signing ceremony for an executive order at the White House on the “National Roadmap to Empower Veterans and End Veteran Suicide” March 5, 2019 in Washington, DC. Larkin's son Ryan, also a Navy Seal, took his own life due to the effects of traumatic brain injury sustained throughout his military career. (Getty Images)

“Mr. President, my son had ‘invisible wounds,’ just like so many other members of active service and our veteran population. Many of these men and women trained for combat and or experienced combat operations, while others may have suffered contact head injuries from other causes. Because our current medical imaging technology cannot see this microscopic level of injury, we don’t know how many of our warriors and veterans may be suffering from impact or blast TBI. Further, there is an increasing body of evidence linking TBI (biological injury) to suicide. When the wiring in the head is damaged, things do not work normally, which is no different than a damaged power grid following a hurricane.

“Mr. President, I believe that I speak for all those who have felt the injurious impact of your statement. I hope this letter serves to enlighten you to the issues related to TBI and the delicate nature of brain health. You can turn this misstep around by applying an increased level of effort to urgently drive the much-needed research into TBI and demand results from the government bureaucracies that often impede advancing injury prevention, diagnosis, treatment, and rehabilitation. I sincerely hope that you and your family never have to deal with TBI and its life-changing consequences.  I suspect that if your family had been previously touched by brain injury, yesterday’s statement would never have been made. I am available to further discuss this complex national health issue at your convenience…let me help.”

Larkin goes on to enumerate a four “asks” of Trump and the current administration:

As a “personal ask,” Larkin is also requesting a change in his son’s “honorable medical retirement finding from 70% disability to 100% disability in light of direct medical evidence of microscopic brain injury from military blast exposure.

“This evidence, though included in the appeal application for medical retirement, was not considered by the US Navy Board of Corrections of Naval Records. This would set a precedent for other like applications and appeals, recognizing new medical evidence of TBI and associated conditions.”

According to a biography on SOFX, Ryan F. Larkin, US Navy SEAL, passed away on Sunday, April 23rd, 2017.  He graduated BUDS Class 268 and received his Trident and Navy Parachute Wings in October 2008.  After training as a Special Operations Combat Medic and a Naval Special Warfare Sniper, Ryan had two combat deployments to Iraq and two deployments to Afghanistan, along with missions to Lebanon and Honduras.

He was awarded the Bronze Star, Army Commendation and Navy-Marine Corp Achievement medals with valor, as well as numerous other awards.  Ryan continued his service as Lead Petty Officer and senior instructor for the Special Operations Urban Combat Course of instruction for deploying SEAL teams.  He received an Honorable Discharge in March 2016 and was pursuing a degree in Mathematics.