Nancy Pelosi says there is "no chance" of a US-UK trade agreement if the Good Friday Agreement is undermined amidst Brexit. 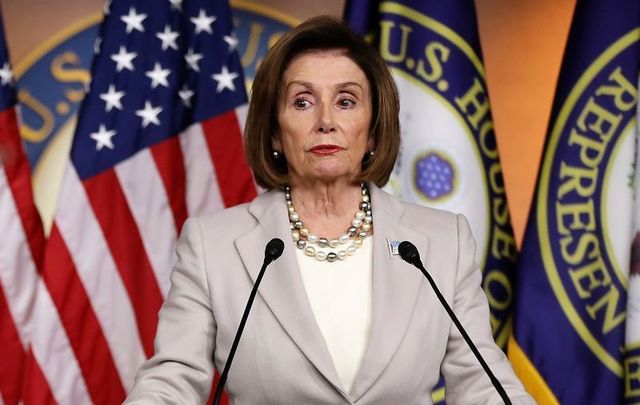 Nancy Pelosi, the US Speaker of the House. Getty Images

Nancy Pelosi, the US Speaker of the House, has reiterated that a US-UK trade deal will not happen if the UK reneges on the Brexit agreement

Nancy Pelosi, the Speaker of the House for the US House of Representatives, issued a statement on September 9 reiterating the US government’s stance on the Brexit Withdrawal Agreement and its effect on potential US-UK trade deals.

Pelosi's statement comes after The Financial Times reported on September 6 that UK Prime Minister Boris Johnson was preparing legislation - the "Internal Market Bill" - that would reportedly override aspects of the already-agreed upon Brexit Withdrawal Agreement.

The agreed-upon Withdrawal Agreement protects Northern Ireland's Good Friday Agreement, of which the US is a guarantor.

In a brief statement issued late in the afternoon on September 9, Pelosi said: “The Good Friday Agreement is the bedrock of peace in Northern Ireland and an inspiration for the whole world.

“Whatever form it takes, Brexit cannot be allowed to imperil the Good Friday Agreement, including the stability brought by the invisible and frictionless border between the Irish Republic and Northern Ireland. The U.K. must respect the Northern Ireland Protocol as signed with the EU to ensure the free flow of goods across the border.

“If the U.K. violates that international treaty and Brexit undermines the Good Friday accord, there will be absolutely no chance of a U.S.-U.K. trade agreement passing the Congress. The Good Friday Agreement is treasured by the American people and will be proudly defended in the United States Congress.”

Pelosi’s statement comes just hours after Representative Richie Neal, the head of the Ways and Means Committee, issued a similar statement, and not long after Antony Blinken, a foreign policy adviser to Joe Biden, said that Biden is committed to preserving the hard-earned peace and stability in Northern Ireland.

The Irish Times reports that the Ad Hoc committee to protect the Belfast Agreement, a group of senior Irish-American former foreign policy officials, ambassadors, and members of US Congress, said in a statement: “We believe that the Northern Ireland Protocol of the Withdrawal Agreement is a hard won compromise that requires respect from all parties given its status as an International Agreement.

“Political leaders and trade negotiators may sabre rattle all they want as they seek to negotiate a much-needed trade deal but the Good Friday Agreement cannot be viewed as a bargaining chip.”

Also on Wednesday, Taoiseach Micheál Martin said in a tweet that “Any negotiation process can only proceed on the basis of trust:”

Any negotiation process can only proceed on the basis of trust. When one party to a negotiation decides that they can change what’s already agreed and incorporated into law, it really undermines trust. This is a critical time in the #Brexit process and the stakes are very high.