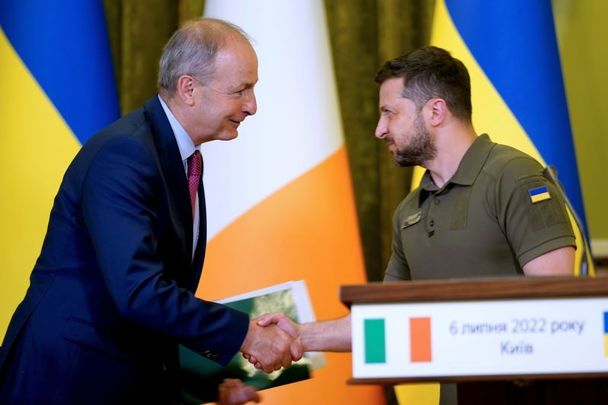 Taoiseach Micheál Martin arrived in Kyiv, Ukraine today, July 6, “to express the Irish people’s solidarity in the face of Russia’s illegal and immoral war on Ukraine.”

“The people of Ireland stand with Ukraine and its people in the face of Russia’s immoral and unprovoked war of terror," the Taoiseach said ahead of his first official visit to Ukraine.

“The bombardment and attacks on civilians are nothing short of war crimes, and I will use my visit to express Ireland’s support for moves to hold those behind these attacks fully accountable.

“The spirit and resolve of the Ukrainian people has inspired us all, and Ireland will provide every support for Ukraine’s path to full EU Membership, and continue to welcome and support civilians fleeing this war."

The Taoiseach said it was "difficult to comprehend the devastation and inhumanity of Russia's attacks on Irpin, Borodyanka, and Bucha."

It is difficult to comprehend the devastation and inhumanity of Russia's attacks on Irpin, Borodyanka and Bucha.

Clear how important it is for women and children to get to Ireland to escape trauma and brutality. We stand with Ukraine 🇺🇦 pic.twitter.com/aFcfJLn9SM

He visited the Holodomor Memorial in Kyiv, noting that "both Ukraine and Ireland know the suffering and pain of famine."

Visited the Holodomor Memorial in Kyiv.
Both Ukraine and Ireland know the suffering and pain of famine.

Russia must not be allowed to use food as a weapon in this immoral and unjustified war. pic.twitter.com/gAgY8jYqFf

During a joint press briefing in Kyiv, Martin said: "I’m here, first of all, to express Ireland’s solidarity with the government and people of Ukraine. We admire you, and we are with you.

“Russia's brutal war against this beautiful democratic country is a gross violation of international law.

"It is an affront to everything that Ireland stands for, it cannot and it will not be allowed to stand.”

Martin said that earlier in the day, he witnessed “firsthand the horrific reality of war on the people of Ukraine” and that he met with local representatives who shared “with great detail” about the atrocities that had occurred.

“The use of terror against and the deliberate targeting of civilian populations are war crimes,” Martin said. “Those responsible, those carrying out these actions, and those directing them will be held fully accountable, and there will be no hiding places. That is why we’re delivering additional funding to the International Criminal Court.”

Taoiseach Micheál Martin has told President Zelensky in Kyiv that Ireland stands with Ukraine, saying Russia’s invasion is ‘an affront to everything Ireland stands for’ | Read more: https://t.co/xfhQErOjmq pic.twitter.com/7aucc6KHIA

Zelenskyy said during the press conference: "Ukraine is grateful to Ireland for its sincere support for the sovereignty and territorial integrity of our state, for supporting our European aspirations, as well as our people who were forced to seek shelter from hostilities on Ukrainian soil abroad."

"Our Irish friends fully understand the threats posed by this Russian war against Ukraine and against the entire democratic world," Zelenskyy said, adding that "Ukraine appreciates everything that Ireland has already done to make Russia feel the price of its terrorist actions."

Ireland, which has waived its visa requirements for people fleeing Ukraine, has so far taken in more than 38,000 Ukrainians as of June 19, according to Ireland's Central Statistics Office.