Former Tanaiste Eamon Gilmore, the EU Special Representative for Human Rights, visited Ukraine to see "first hand the violations of human rights and the war crimes that are being committed.” 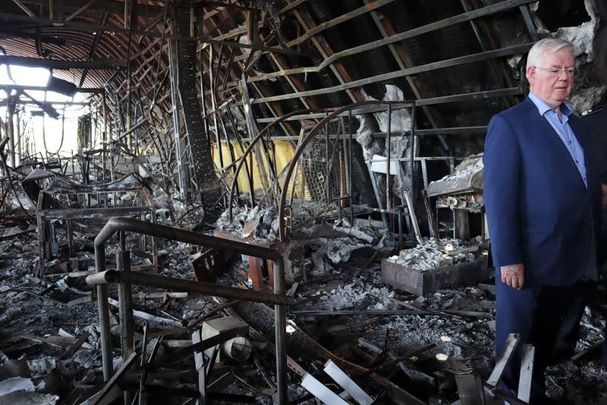 Former Tanaiste Eamon Gilmore, on a war crimes investigation in Ukraine, spoke of horrors committed by Russian troops, including the death of a 19- month-old child and the discovery that civilians were shot dead as target practice by snipers.

Gilmore was in Kyiv and surrounding areas this week as an EU representative for human rights.

#Ukraine: Today I am in Kyiv, Ukraine to show my solidarity 🇪🇺🇺🇦
Having met with refugees at the Polish border at the start of the Russian aggression, I now retrace their steps. #WorldRefugeeDay pic.twitter.com/70LWotX5lg

On Sunday, he visited mass graves in Bucha which contained up to 116 bodies, including the youngest victim, aged one year and seven months.

#Ukraine: In Bucha and Irpin today, I saw the mass graves of victims of Russia’s War of Aggression, talked with the local priest who knew them, and stood in a bombed out shopping centre. War crimes, and those who commit them must be called to account. pic.twitter.com/rnOAOyGNS1

He received information from Ukraine officials that many buried in the mass graves had been shot through the eye. He said that suggested “they were shot at some distance by snipers and may even have been used as target practice.”

He told RTÉ, “I also met with people who have been victims. I met with a doctor and because there were some medicines in her house, the Russian soldiers came several times to question her, her husband and her son. They shot her husband in the hip and in the knee. They took the three of them away. She and her husband were eventually released but she hasn’t seen her son for three months. She doesn’t know where he is.”

Gilmore said the visit was to enable him “to see at first hand the violations of human rights and the war crimes that are being committed.”

What he saw was evidence of civilian life being targeted. “These were not military targets. This was an attack on civilians. These are war crimes and there has to be accountability for it.”

It wasn’t just the Russian soldiers on the ground who were responsible for what he regarded as “truly shocking” atrocities.

He said, “This must go beyond those who were on the ground and were doing this, but those who sent them there; those right up the chain of command who have responsibility for what has happened in Ukraine.”

Gilmore, who explained the main purpose of his visit was to talk about how the EU can support the effort to bring those who are responsible to justice, met with representatives of the Ukrainian government, the parliament and with the prosecutor’s office.

His mission was to ensure that the combined effort would ultimately lead to those responsible for the crimes being held accountable and being brought before a court.

Gilmore’s visit coincided with Ukraine President Volodymyr Zelensky’s prediction that Russia will escalate its attacks this week, as European leaders consider whether to back his country’s bid to join the EU, which Ireland supports.

Delighted to talk to President @ZelenskyyUa and confirm Ireland's support for Ukraine's EU Membership at this week's European Council.

We are, and will be, with #Ukraine every step of the way. pic.twitter.com/kIdsA6bsGg

WATCH: Day of Reflection held in Belfast for victims and survivors of The Troubles