Tanaiste Leo Varadkar and his partner Matt Barrett are hosting a Ukrainian refugee in their home. More than 35,000 refugees have now arrived in Ireland. 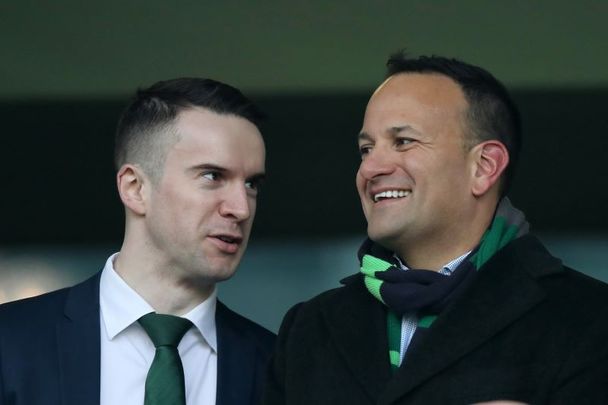 March 10, 2019: Leo Varadkar (R) and his partner Matt Barrett at the Guinness Six Nations match between Ireland and France at the Aviva Stadium in Dublin, Ireland. Getty Images

Tanaiste Leo Varadkar and his partner Matt Barrett have been hosting a Ukrainian refugee at their home in Dublin since last month.

“We haven’t really discussed how we’d handle media queries yet,” he said with a laugh.

He continued: “It’s something that Matt and I decided we’d like to do. [We] weren’t able to do it in the past because we were in an apartment and the second bedroom was effectively our storage space but now that we have a house, we’re able to help and we’re happy to do so.

“I really feel for what people in Ukraine are experiencing, and this is a small thing that we can do to help out and we’re happy to do it,” he added.

People in Ireland can pledge accommodation - spare rooms or vacant properties - for Ukrainian refugees through the Irish Red Cross, which is working with the Irish Government to match people who have accommodation to offer with refugees who have come to Ireland.

In May, the Irish Government approved a monthly flat rate Recognition Payment of €400 per property in respect of individual properties, shared or vacant. The payment will be conditional on a minimum time commitment for hosting (6 months), with payments continuing for hosting arrangements beyond this timeframe.

📢 Ministers @rodericogorman and @HHumphreysFG announce €400 Recognition Payment for people who provide accommodation to those fleeing the war in Ukraine.

How many Ukrainian refugees are now in Ireland?

According to Ireland's Central Statistics Office (CSO), there were 35,670 arrivals from Ukraine in Ireland by the week ending June 5, an increase of just over 2,500 in two weeks.

There were 35,670 arrivals from Ukraine in Ireland by the week ending 05 June 2022, an increase of just over 2,500 in two weekshttps://t.co/3YvmirctfF#CSOIreland #Ireland #Population #Ukraine #Refugees #UkrainianArrivals #Migration #MigrationEstimates pic.twitter.com/OFCumxWgyv

Of that figure, 48% were women aged 20 and over, while 37% were individuals aged 0-19, both male and female. The highest percentage of those arriving (42% or 14,929 individuals) were categorized as 'one parent with children' under the broad relationship classification headings used. The CSO notes that spouses/partners may have stayed in Ukraine.