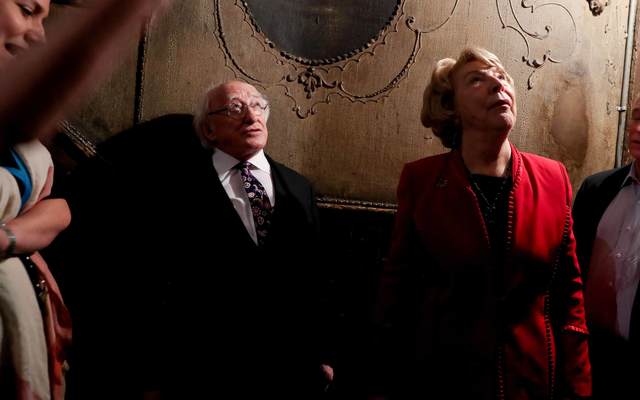 President Higgins believes he has the “energy and capacity” for a second presidential term, speaking near the end of a packed week of diplomatic, business and community events in New York.

Irish President Michael D. Higgins has stated that the significance of past migration from Ireland should always “be at the forefront,” highlighting that there was “no single stream of Irish migration.”

“I don’t underestimate at all the obstacles they faced,” President Higgins said on the Friday of his week-long trip to New York, citing the “barriers of exclusion” Irish immigrants faced once in the US as well as the rungs they had to climb within Irish society to reach the point where they could afford the passage to America.

Having spoken of the fact that, by 1901, more Irish people were living outside of Ireland than Irish people on the island of Ireland, the president reiterated the importance of Irish America in the last decades of the 19th century, referencing in particular the 1916 Easter Rising and the effect that living in New York had on the likes of signatory of the Irish Proclamation Thomas Clarke, who spent a time living in Brooklyn and Long Island, setting up the Brooklyn Gaelic Society during this time.

On Friday afternoon, the president toured the Tenement Museum of New York City, viewing the former tenement rooms where immigrants of all nationalities would have lived on their arrival. The fourth floor of the building, in particular, is restored to show the life of the Moore family, the Irish family carving out an American identity while also maintaining aspects of their own culture in this new life.

The sold-out event featured performances from renowned Irish fiddle player Martin Hayes on the first night of his Irish Arts Center residency, Irish singer-songwriter Declan O’Rourke and Irish vocalist Camille O’Sullivan and raised $300,000 for the IAC as they edge ever closer to Phase One of their multi-million dollar new center to be based in Hell's Kitchen.

The president outlined his own presidency as one that was for all the “different parts of the Irish community and all of the Irish wherever they may be.”

Praising the arts for its ability to promote “feelings for empathy” and “a sense of vulnerability," the president spoke about how “Irish culture never was, never is, and never should be packaged” and added that he was privileged to be in the company of such artists who keep the “core of Irishness going.”

He praised the work of the Irish global community and the New York Irish community, stating that they exemplify the “spirit of tradition” and that the development of a new center “symbolizes a new chapter of the Irish and the history in New York.”

On Thursday, the president was thought to have taken a swipe at the current Trump administration while speaking at an Ireland Funds event.

“Indeed, today we are witnessing a worrying surge of unapologetic sexism and the undermining of women’s rights in one of the world’s most advanced democracies,” he said.

On Friday, however, President Higgins said he would not dream of commenting on the holders of office in another country but restated the points he had made in a speech to the United Nations on Tuesday, when he decried a return to military action around the world and mentioned the importance of Paris climate change accord, stating that it would not be in the best interests of the US to withdraw.

Throughout his trip, President Higgins was pushed on the question of a potential second term in Áras an Uachtaráin. Although running a campaign on the basis of holding one-term in office in 2011, the president is rumored to be considering a second seven years and is planning to announce his intentions in July.

In a meeting with Irish American press on Friday, Higgins said that he felt he had the “energy and capacity” for a second term if that is what he decides to do, adding “it’s up to the people to decide and that suits me, too, as a campaigner all my life.”

Would you like to see President Higgins in Áras an Uachtaráin for a second term? Let us know your thoughts in the comments section, below.