Tanaiste Leo Varadkar said Michael Collins believed there was an "alternative to violence" - a swipe at Sinn Féin's Michelle O'Neill - while speaking at a commemoration event at Dublin's Glasnevin Cemetery. 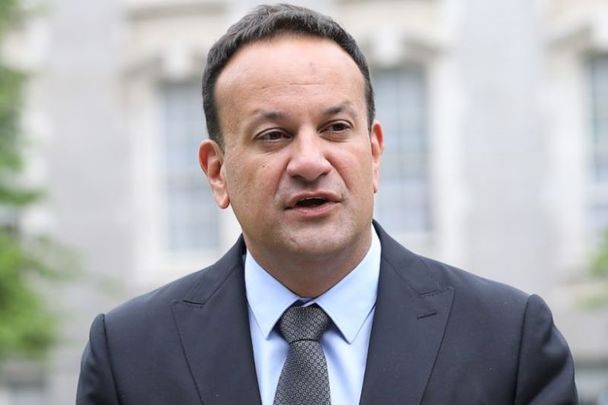 As Ireland is poised to celebrate the centenary of the death of Michael Collins, Tanaiste Leo Varadkar reminded a commemoration audience that the IRA leader of 100 years ago believed there was an alternative to violence.

More than 5,000 are expected to attend a service next Sunday marking the 100th anniversary of the ambush and shooting dead of General Michael Collins at the age of 31 at Béal na Bláth in west Cork.

Collins was killed in a still-unsolved murder 10 days after the death of his friend, Sinn Féin founder Arthur Griffith, who died at the age of 51 from a brain hemorrhage.

Both were remembered at an event in Glasnevin Cemetery in Dublin on August 14 organized by the Collins/Griffith Commemoration Society.

We honour those who sacrificed their lives to give us the State we have today best by living up to their ideals, by rededicating our lives to the service of others, and by remembering that despite our differences, our common cause is Ireland. pic.twitter.com/UCGVFilptE

At the event, Varadkar took a swipe at the current Sinn Féin leadership when he spoke of the two Irish independence leaders. Recently, Sinn Féin Vice President Michelle O’Neill was criticized for saying there was no alternative to the IRA’s armed campaign during the Troubles.

Varadkar told the crowd, including politicians from his own Fine Gael Party and other groups, “As we all know the name Sinn Féin has been used in more recent times by those who have never understood the principles by which people like Griffith and Collins lived their lives, or tried to follow them. Both were pragmatic men and neither believed there was no alternative to violence or war.”

The armored car Sliabh na mBan, which formed part of Collins’s convoy when it was ambushed at Béal na Bláth in west Cork resulting in his death, was on display at Glasnevin Cemetery for the occasion.

The Collins/Griffith Commemoration Society is delighted to announce that the Sliabh na mBan armoured car will be at...

The car will also be at next Sunday’s Béal na Bláth ceremony when Varadkar will be joined by Taoiseach Micheál Martin of Fianna Fáil when both will deliver orations in a historic first, a symbolic gesture of solidarity between the leaders of the two Irish political parties which trace their ancestry to the treaty between Britain and Ireland signed in London in 1921 by Irish representatives who included Griffith and Collins. The treaty led to the civil war and Collins’ death.

The legacy of Collins is so great that for years the most stolen road sign reported by Cork County Council was that for Béal na Bláth.

The Irish Independent reports that regular thefts, infuriating for the council, were sparked by an insatiable market worldwide among collectors and Irish pubs for something associated with the “Big Fella,” as Collins was known.

A veritable industry has developed around the life and legend of Collins. There are Collins history trails, heritage walks, and special museum exhibits, while numerous books, films, and documentaries have been made about his life.

Big Fella t-shirts sell in souvenir shops, and thousands of visitors flock to see his ancestral home outside Clonakilty. Even the historic Imperial Hotel in Cork, where Collins spent the last two nights of his life, has completed a major refurbishment of the room in which he stayed, returning it to a 1920s appearance.

Patsy Murphy, who sells Collins t-shirts across markets and festivals in Cork, said, “You would be amazed at the number of Michael Collins shirts we sell, particularly to tourists. It is almost like he is Ireland’s equivalent to Che Guevara.”