New York City has lost another of its famous Irish hostelries as The Mean Fiddler will close at the end of October. 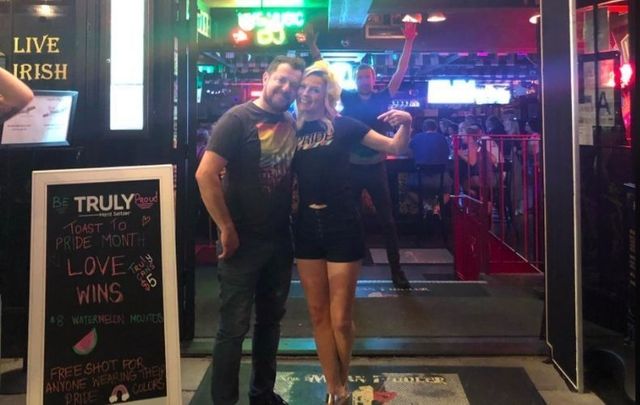 Dave Barckow and Louise Barry, The Diddley Idols, at The Mean Fiddler before the pandemic.

COVID, combined with an unflinching landlord, meant the popular Irish pub in Times Square could no longer survive.

Michael McNamee, the Dublin-born co-owner of The Mean Fiddler pub and restaurant with his brother Patrick, is deeply emotional when speaking about the closure of his business at the end of this month.

The Mean Fiddler was the first of the six pubs he and his brother own, and unquestionably the special one. It kickstarted their careers as successful business owners and allowed them to meet people from all over the world who became customers and friends.

And now it’s just about gone. It likely would have survived the COVID restrictions still in place, but coupled with an unflinching landlord unwilling to lend a helping hand, The Mean Fiddler couldn’t last.

It’s been 15 years since the McNamees, former bartenders themselves, established their business at 266 West 47th Street.  They were never late with the rent and were model tenants, but the landlord didn’t want to know.

“There was absolutely no negotiating with him, no talking to him.  It didn’t matter to him how badly we were hit by COVID,” McNamee told the Irish Voice.

On November 1 the landlord will have an empty storefront, and The Mean Fiddler will be gone. It’s a harsh reality that hasn’t quite sunk in for McNamee.

“Life without The Mean Fiddler is something I really don’t want to think about,” he says.

But he’ll always have the memories. Before he and his brother took over the space it was a gay bar. Patrons would come looking for their old haunt but saw “pretty Irish barmaids instead," McNamee laughed.

They painted the interior yellow, eventually became a home for all kinds of music, particularly Irish, and welcomed visitors from all over the world. Three years ago, to comply with the Americans With Disabilities Act, the brothers invested more than $300,000 in upgrades like a new bar and HVAC system. It looked spiffy and shiny, but McNamee was worried that some of the regulars might not approve.

“I was pulling the last strands out of my hair thinking that people would think it wasn’t Irish enough anymore,” he said. “But it was all good. People still loved it.”

That’s true of the customers and the staff, who McNamee says are the same as family members. Dave Barckow, one half of the Diddley Idols band with his wife Louise Barry, played live music at The Mean Fiddler three nights a week for the past six years.  Its closure, he says, is “just devastating.”

“I know it’s been a weight on Pat and Mike,” Barckow told the Irish Voice. “I’ve known them for so long and watched them build their businesses. Nobody has a bad word to say about them, ever. There’s never been a disgruntled employee.  They are just great people.”

The Diddley Idols returned to The Mean Fiddler in August to provide outdoor music to the diners two nights a week. “It feels more like busking, to be honest, but it’s gone well and gets us back to what we love to do,” Barckow says.

The number of people who the Diddley Idols met at The Mean Fiddler, from all over the world, prompted Barckow and Barry to greatly increase their song offerings from Irish to basically everything out there.

“I’d see tourists and they’d be around for however long their trips were, and every night they’d make their way to The Mean Fiddler because the vibe was so good and everyone was so friendly,” Barckow says. “Louise learned to say thank you in like 20 different languages.”

Life without The Mean Fiddler, Barckow says, “won’t be good, won’t be as much fun,” especially as his own business as a live musician who also tours the U.S. with the Eileen Ivers Band has been so brutally impacted.

“It’s been real tough,” he says. “Eileen had a huge tour canceled and she also planned a Christmas tour with 20 shows. Only four of them are still on.”

There’s uncertainty all over, and McNamee finds New York these days eerily reminiscent of the 9-11 aftermath.

“The demographics have changed significantly now, just like after 9-11. Back then New York didn’t really have loads of big chains like Ruby Tuesday or Chipotle and now they’re all over the place at the expense of mom and pops,” he said.

“The same thing is happening today with all the small businesses forced to close. There’s been a mass exodus of Irish people too. What’s left now is not a lot.”

McNamee will focus on the uncertain future. He and his brother own five other pubs/restaurants, one of which, he says, could also be closed by the end of the year.

The announcement of The Mean Fiddler’s closure on Facebook by McNamee in a touching video garnered thousands of reactions from long-time customers, all of them sad and shocked by the loss of another New York cornerstone. Would McNamee ever consider reopening his first business – “my baby,” as he calls it – at some point in the future?

Had a few red breast Irish whiskeys and Few pints of guinness but my message is what made the Mean Fiddler . We are lucky we had those years . And I am lucky to have met so many good people through the years !! We can never look back only look forward !!

“Well, that’s really hard to say. I’d have to wait to see what the world would be like,” he says.

“And, you know, I’d have to have two very young and energetic guys to get it going. This isn’t an easy business, and the first two years you basically give up your life which is what we happily did 15 years ago to get The Mean Fiddler up and running. They were unforgettable times.”