Foley’s NY Pub and Restaurant announced last week that it would not be reopening after the COVID-19 crisis. 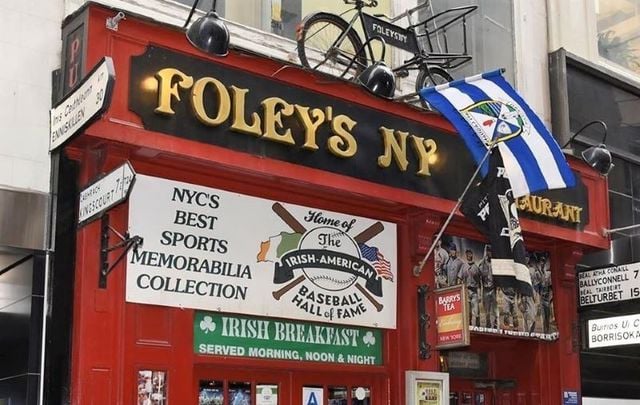 You didn’t find quotes from James Joyce, heraldic coats of arms, photos of the lush green Irish countryside, or a copy of the POBLACHT NA hÉIREANN from 1916 on the walls of Foley’s NY Pub.

No, inside 18 W. 33rd St., you found baseballs – more than 3,500 of them, according to Shaun Clancy, the man who collected and counted them – adorning the walls. They were signed by the likes of Sean Casey, Vin Scully, Nolan Ryan, and Derek Jeter (whose mother is Irish). The place was named for longtime New York sportswriter and official scorer Arthur “Red” Foley, who, like Clancy, didn’t drink.

Foley’s, the “Irish Bar with a Baseball Attitude,” offered a warm Irish welcome, well-priced home-cooked food, and a great pint of Guinness (among the sea of craft beers on tap). Its customers were as eclectic as the memorabilia on the walls. Foley’s attracted local office workers, tourists looking for a meal after visiting the Empire State Building, and, of course, sports fans. However, in March, you could always count on a Cavan contingent that came to New York for the St. Patrick’s Day Parade.

Clancy literally grew up in the bar business. His family ran the award-winning Derragarra Inn, in Butlersbridge, Co. Cavan. His father worked at the legendary Toots Shor’s, a saloon in Manhattan that welcomed Marilyn Monroe, Joe DiMaggio, and your average Joe, too.

When he had the opportunity to start his own place, Clancy sought to recreate the Toots Shor vibe. And he did it successfully. (Some even when as far as calling the pub a “21st Century Toots Shor’s.”) You could walk in and find Yankees GM Brian Cashman behind the bar, Mad Men star John Hamm watching the St. Louis Cardinals play in the World Series, or Mets icon David Wright enjoying his first meal in New York or his last beer as a player. You never knew who you might meet at Foley’s!

COVID-19 closed all of New York’s bars on March 16. The timing was particularly cruel. The pandemic also canceled the Big East basketball tournament, St. Patrick’s Day, the NCAA tournament, and baseball’s Opening Day. For any bar business, those were big days. For Foley’s, losing those events was the equivalent of shutting a store on Black Friday.

The success of Foley’s had much to do with Clancy’s way of treating people and his dry Irish wit. In 2008, he became known worldwide for banning the singing of Danny Boy for the entire month of March. “It’s one of the 25 most depressing songs of all time, more appropriate for a funeral than St. Patrick’s Day, and written by a man who never set foot in Ireland,” Clancy told the Associated Press, RTE, the BBC, Stephen Colbert, and every wacky morning DJ or newspaper reporter who called from across the globe.

That April, he threw himself at the feet of Frank Patterson’s widow, Eily O’Grady, to beg forgiveness and invited Irish tenor and Broadway star Ciaran Sheehan end the ban and sing the song for the first time. The press gobbled it up.

A few years later, Clancy banned Sam Adams beer in his bar on Super Bowl Sunday when the Giants played the New England Patriots. While Budweiser spent more money on TV ads, no beer company received more publicity than Boston Brewing that year. A few months later, Jim Koch came to visit and “forgave” Clancy for the ban, which ultimately giving Koch more attention than he could have ever hoped for during Super Bowl Week.

True to his Irish roots, Clancy created the Irish American Baseball Hall of Fame in 2008 to honor the rich tradition of Irish Americans in the sport, dating back to its earliest days. Among the “starting nine” were beloved Mets pitcher Tug McGraw, slugger Mark McGwire, and legendary manager Connie Mack (Cornelius McGillicuddy), whose Kerry-born parents escaped the Famine. Mack won more baseball games than any other manager in baseball history, and his daughter Ruth Mack Clark, age 95 at the time, accepted the plaque on her father’s behalf. She thrilled the crowd by telling stories about her father and some of his friends, including Babe Ruth and Al Capone.

Clancy was the first to admit that the IAB HOF was a publicity stunt but took it seriously once he saw how much the induction meant to the inductees. Yankees GM Brian Cashman told Clancy that people often assumed he was Jewish. “My middle name is McGuire,” he said proudly.

“Every year somebody cries,” Clancy said. “Tim McCarver, a longtime MLB player and Hall of Fame broadcaster, said of all his accolades, his induction into the Irish American Baseball Hall of Fame is the thing that would have made his grandparents the most proud.”

Dodgers slugger Steve Garvey, one of baseball’s biggest stars in the 1970s, flew in from the West Coast with longtime Dodger owner and fellow inductee Peter O’Malley to accept the honor. Sean Casey came and drank water at his lunchtime induction because he was still an active player with the Red Sox and had a game at Yankee Stadium that night. Nolan Ryan, baseball’s all-time strikeout king, couldn’t make the trip to New York but instead invited Clancy to Dallas to present the plaque to him on the field before a Texas Rangers game.

Notably, Clancy raised tens of thousands of dollars as the host venue for charitable causes, including cancer research, suicide prevention, victims of 9/11-related ailments and Hurricane Sandy, anti-hunger groups, and just about anyone else who asked for his help. Clancy ran a beer-tasting fundraiser that helped former NJ wrestling star Brett Epps get a new kidney and an autograph session with Mets players and alumni who wanted to support the young family of the Amazin’s PR executive Shannon Forde, who died of breast cancer.

Giving back was always something he was proud of doing. Sometimes Clancy would donate not just 10% or 15% to a cause, but an entire evening’s proceeds to help the fundraising effort.

“I’ve been blessed,” said Clancy, who has spent the past week packing up his quirky memorabilia collection that includes stadium seats, game-used jerseys, a brick from Wrigley Field, and champagne corks from World Series celebrations.

Clancy announced the closing of Foley’s in a video he posted on social media, and -- just as it happened when he banned Danny Boy -- the news quickly went viral.

“Foley’s won’t re-open. Just with everything that is going on, there’s just no way that I can see that we can do it,” he said.

“I really don’t know what to say except to thank you all for everything that you’ve done,” said Clancy. “Foley’s was always about the people. Even now as I look around, so many memories. I appreciate everything you guys have done for me.”