Study shows how physical distancing could affect pubs in Ireland 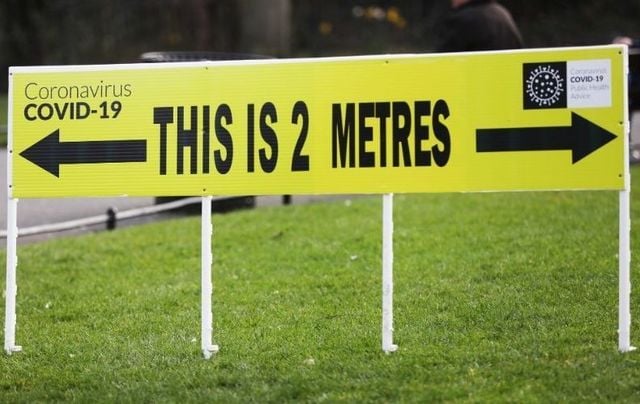 A sign showing the distance of 2 meters to help people with social distance issues in St Stephen’s Green in Dublin on March 25, 2020. RollingNews.ie

While one doctor with the WHO recommends one meter of distancing as "the bare minimum," the HSE is advising for two meters - a detail that could have a major impact on businesses.

Read More: More than 40 percent of Dublin pubs plan to reopen as restaurants in June

Dr. David Dr. Nabarro, WHO Special Envoy On Covid-19, was featured on RTE Radio One’s Today Show on May 25 where he discussed the importance of physical distancing and the difference between one meter and two meters of distance.

Dr. Nabarro said that “around 70 percent of the droplets [from a cough] will stick within one meter,” while two meters of physical distancing “basically keeps you safe 99 percent of the time.”

Dr. Nabarro acknowledged the difficulties that this presents for pub and restaurant owners: “Just imagine the people running restaurants - one meter could mean that they might have profit, two meters means that they might go bankrupt. I see how much this is a problem for everybody.”

When asked about bars and restaurants reopening in Ireland, Dr. Nabarro said: "I want to encourage everyone to be thoughtful about this.”

He explained that if you go to a pub or restaurant while you’re not feeling well and you cough, you yourself may “not get any bad outcome of it,” but the staff there could be impacted.

"Always think about the people who are serving you,” Dr. Nabarro cautioned, “not just about yourself when it comes to going to the pub or going to restaurants.”

Dr. Nabarro also pointed out that the WHO believes "the virus transmits a lot easier in confined spaces than in open air."

"There are things that restaurants can do as they reopen that can reduce the risk both to patrons and their staff," he said.

Overall, Dr. Nabarro says: “One meter is the absolute minimum physical distancing that we should be adopting when we’re in a shop or a crowded place, particularly if it’s a confined space.”

The day after Dr. Nabarro's comments, the Vintners Federation of Ireland (VFI) and the Licensed Vintners Association (LVA) issued a joint statement regarding a study that found that “typical” bars and restaurants in Ireland could face an 87% reduction in capacity when complying with the HSE-mandated 2 meters of physical distancing.

The statement from the VFI and LVA reads: "When the HSE social distancing guidelines are applied, the standing capacity per 100 square metres drops from 200 people to 25 people (12.5%), while the seated capacity in a bar or restaurant goes from 100 people to 34 (34%).

"World Health Organisation (WHO) guidelines involve a social distance requirement of 1 metre. Under the WHO provisions, standing capacity would drop from 200 people to 100 (50%), while seated capacity in pubs and bar/ restaurants would decrease from 100 to 65 (65%). "

Donall O’Keeffe, Chief Executive of the LVA, said in the May 26 statement: “It is vital that pub businesses fully grasp the commercial challenges they will face and thoroughly examine the prospects for whether they can afford to reopen.

“While every pub and bar/ restaurant will have different layouts and configurations, the findings will broadly apply across the sector and they are stark. Seated capacity will drop to approximately one third of previous levels, while standing capacity can be divided by a factor of eight. Those are dramatic decreases and they will have extreme impact on turnover potential.

“The WHO requirements will still significantly reduce capacity, but they will at least allow more pubs and other hospitality businesses to be capable of trading in the shorter term.

"But that is a decision for the Government and the public health officials."

Padraig Cribben, VFI Chief Executive, said: “Since the beginning of this crisis, pubs have put the public health first. We were the first sector to be closed en masse, which was widely supported by pubs across the country in the interests of public health.

"Ultimately if there is to be a change in social distancing then that will need to be made by the National Public Health Emergency Team (NPHET) and the Government.

“From the perspective of commercial viability, the WHO guidelines obviously make much more sense for hospitality venues such as pubs.

“While we have been calling for equality of opportunity to reopen for some time, the question still remains as how many pubs will actually be able to operate once the opportunity arises. That is a question that is still being asked by publicans across the country and we will certainly need further guidance on the reopening protocols in the near future to allow fully formed business decisions to be made in advance of any reopening."

Both organizations said they will continue to adhere to the HSE's advice.

Read More: Lockdown Blues: Folks, have you no pubs to go to?