Tánaiste says pubs reopening ahead of schedule in Ireland “a possibility”

Pubs in Ireland are not set to reopen until August 10 at the earliest as per a reopening roadmap that was published by the Irish government on May 1. 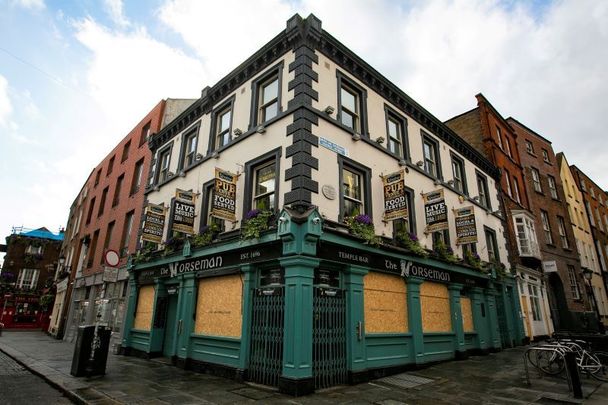 The Norseman in Dublin's Temple Bar district on April 21, 2020 during the coronavirus shutdowns. RollingNews.ie

Tánaiste Simon Coveney today discussed the possibility of pubs in Ireland reopening ahead of the schedule that is laid out in the roadmap published by the Irish government on May 1.

Coveney's discussion of pubs reopening comes the day after both The Vintners’ Federation of Ireland (VFI) and Licensed Vintners’ Association (LVA) published measures which they hope the government will accept to allow them to reopen at the same time as cafes and restaurants.

The groups said in a joint statement: "The Vintners’ Federation of Ireland (VFI) and Licensed Vintners’ Association (LVA) have written to the Government accepting their invitation to discuss the Government Roadmap and its implications for pubs as a matter of urgency. This follows commitments made by Ministers over the weekend that the Government will meet with the two representative bodies for publicans over course of the coming week.

"As part of their discussions with the Government, the two organisations will be pressing for pubs to reopen at the same time and on the same basis as cafes and restaurants. Recognising the challenge of maintaining social distancing in a hospitality environment, the organisations will also be putting forward radical changes to the normal operations of bars in order to protect public health.

"The two organisations will also stress they remain fully committed to doing what is necessary to protect the health and safety of all staff and customers.

"Strict protocols setting out how staff and customers are required to comply with social distancing in hospitality businesses will be developed in conjunction with National Public Health Emergency Team (NPHET) and the Department of Health. Those protocols would apply to all hospitality businesses. The publican groups would look to have the temporary measures reviewed by NPHET on an ongoing basis, with a view to resuming normal trading when it is safe to do so."

Speaking on RTE Radio's "Today with Sean O'Rourke" program on May 5, Tánaiste Coveney said that the plan laid out on Friday "may need to change" depending on the progress of coronavirus in the country.

When asked if the government would potentially be open to "persuasion from vintners" to open pubs ahead of the date indicated in the roadmap, Coveney said: “What we said is that we would engage with sectors as government, hear what they have to say. A lot of sectors have been putting a huge amount of work into creating a new normal, safely, while COVID-19 is still a reality in Ireland.

“We’re going to interact with all sectors,” Coveney said. “I know that publicans have been putting a plan together in the hope that that may allow them to open pubs earlier.

“I have to say, I think there’s a long way to go in that conversation and I don’t want to create expectations in this interview.”

Read More: Irish pubs may not reopen until 2021, government warns

O'Rourke then referenced Ireland's Minister for Business Heather Humphreys, who said during a press conference on May 2 that there are circumstances in which the reopening dates could be moved up.

Minister Humphreys said on Saturday: "In terms of pubs, if we can keep the virus under control there is now a pathway for the hospitality sector so restaurants can be back by the end of June, hotels by mid-July, and pubs by the 10th of August.

"Many of them had concerns they wouldn't be able to open at all this year so I actually think the sector can take a lot of heart from the roadmap.

"I've spoken with the two main vintners associations this week and I know that officials will be meeting with the vintners in the coming days to discuss further how we can help them.

"It's about people working together and finding the solution and, of course, if we find that the coronavirus is abating considerably well there's no reason why these dates can't be accelerated.

“But at the same time, the opposite occurs, we have the flexibility in this plan to stop as well.”

You can watch the press conference from May 2 here (Minister Humphreys addresses the reopening of pubs from 41:00):

Responding to Humphreys comments about "accelerated" reopening dates, Coveney said: “That’s a possibility, but I think the important thing here is that anything that is proposed to government to change this plan needs to be rigorously assessed by NPHET and the government before we make a decision on it.

“Ultimately, this about saving lives in the middle of an emergency,” Coveney continued, adding: “There are hundreds of thousands of people in Ireland who potentially could be fatally impacted by the spread of this virus.”

Coveney agreed that the people of Ireland have showed “amazing” levels of compliance and a sense of responsibility.

Read More: All pubs and clubs in Dublin's Temple Bar to shut voluntarily due to Covid-19