Lockdown Blues: Folks, have you no pubs to go to?

"So when we ask, when are the pubs going to open again, we really need to be asking, when is it safe to go back into them." 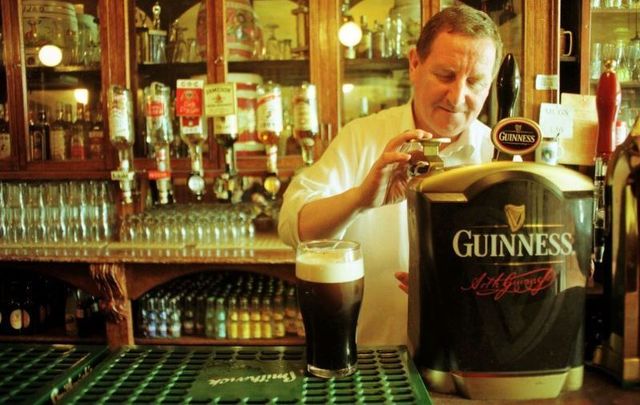 A bartender pulling a pint at Gravediggers pub in Dublin in 1999. RollingNews.ie

Irish writer Tom Galvin considers the difference between when the pubs in Ireland will reopen, and when they'll be safe to visit again.

The Irish Government has unveiled its road map to exit the lockdown on a phased basis. And while it's great to see the hardwares and the hairdressers returning to business, what people really want to know is when the pubs are going to open their doors again. But that's the wrong question to be asking.

Read More: More than 40 percent of Dublin pubs plan to reopen as restaurants in June

A friend of mine recently tipped me off about a radio station called MVY Radio, which broadcasts out of Martha's Vineyard. With so much of the bad times booming out of the radio at the moment, tuning into the waves of good times hitting our shores this side of the pond is a reminder that while this plague has taken so much from us, it hasn't stopped the music.

And this station plays good music. A lot of contemporary Americana, rock, blues, great Irish artists, country, rootsy sort of stuff. Guys like John Lee Hooker, for example. Heard him recently and I thought, what would he be singing now if he were still alive? One Bourbon, One Scotch, One Beer? Not a chance. Not until August at the very earliest. Maybe later. And even then, things are looking a little bit touch and go.

Pressure on the publicans

Right now, at this very moment, there is not a soul on this island who is not asking the same question: when are the pubs going to open again? But we're not asking the right question. That's the problem.

I don't know a lot about Martha's Vineyard. But I do remember, as a kid, watching as it was transformed into the fictional Amity Island where the citizens were as good as on lockdown because of the threat from a giant shark called Jaws.

Police Chief Martin Brody – remember him, fraught as a ninepin, fingers constantly pressed to his scalp, thumbs in his temples, but the one man trying to keep his head when all around him people were quite willing to lose theirs to save the summer season. But he came under terrible pressure to reopen the beaches and he relented. So they opened the beaches. And Jaws came back again – three times in fact. Including once in 3D, and just to make a point, as Jaws The Revenge. So asking when the beaches would open again was the wrong question. The right one was when will it be safe to go back in the water.

In Ireland, right now, we are not standing on the seashore gazing wistfully out to sea thinking about getting back into the water. It's a lot crueler than that. In towns and villages, up and down the country, we're standing on the edges of pavements looking through the dusty pub windows just dreaming about a cold one. So when we ask, when are the pubs going to open again, we really need to be asking, when is it safe to go back into them.

No word of a lie, I had a very vivid dream the other night where I was down sitting in the local and I had two lovely pints. Just two. I told my wife about it the next morning and I thought she'd admire my restraint at having just the two. But even in my dreams, she didn't believe me. And right now, just the two would do.

So how are our leaders here hoping to make the pubs safe? Well, you've probably seen the plans by now and, like the citizens of Amity Island, would rather gamble on the shark just not turning up and have the craic than comply with the punishing rules facing us once the pub doors open again.

There will be table-only service, so hanging out at the bar is gone. The maximum number of people allowed sit at a table will be six, with no more than four people in an area of 10 square metres. I can't even get my head around that. Finally, there will be no live music or DJs (and no spot prizes presumably). So that part where I said this plague hasn't stopped the music . . .

Okay, so it's a bit shit. But look, just as the dung fly thrives in his little world of cow poo, we too can get very used to enjoying things that are a bit shit, if it's the only shit we have. And was it ever really any other way?

Remember how shit the pub experience actually was before the smoking ban in 2004? You'd wake up after a night out stinking like a fire fighter's underpants. That was a bit shit.

Remember how the only food available in the pub was a cheese and ham toastie, which came wrapped in that eerie plastic, laced with seriously shit stuff like dithylhexyl and polyethylene terephthalate, which we know now were the root causes of the fear. That was a bit shit too.

Do you remember the alternatives to the cheese and ham toastie? They were a bit shit. There was the bag of bacon fries, served to induce thirst and mimic the experience of a pig farm. Or the scampi fries, which were a total shocker. I once dined on bags of those for a Friday night solid after work and the next morning was convinced I'd slept with a mermaid. That was a bit shit.

But once the smoking ban was ingrained in our minds and we knew things were never going to be the same again, we moved on, and the pub experience was all the better for it. But still a bit shit.

Do you remember how publicans embraced the 'gastro-pub' gig with gusto without really bothering to enhance the actual dining part of it. That was a bit shit. You'd be handed these sticky menus as soon as you arrived, most items were just variations on the hamburger and you ate while seated on little stools still warm and moist from the night before. Those who weren't eating stood at the bar and farted backwards at you. That was a bit shit.

The world of the Irish pub

Remember all those sad and lonely nights out with your friends? The friends who all smoked but you didn't. So when they went out to the yard to get their faces seared under a patio heater and smoke a ciggie, they stayed there. And made new friends. And you'd be left all on your lonesome on the soggy stool. Remember that? That was a bit shit.

Remember the toilets, ladies? When they stole all that space you used to have to apply make-up and chat and laugh and plot with your friends in all those cubicles. The ones that were reclaimed to make room for the gastro experience or the outdoor smoking area. That was a bit shit. And you started using the men's toilets instead. And that was a bit shit.

But just a few weeks ago, that's more or less where we were. It was a bit shit and it was never perfect but it was our world and it was where we belonged on those Friday and Saturday nights. The quiet midweek pint with just you and the barman. The game on the Sunday evening, the band on a Thursday night. The pub quiz on the Tuesday. It was our world and it might never be the same again.

We all know they need to make it safe to go back in there, but they're going to have to come up with something better to make things that bit less shit. For God's sake. Oh, and there's another rumour going 'round that there's going to be a three-drink-limit enforced too, just to prevent a real shit show when we all go back in there to go bonkers mental. So choose wisely. A bourbon, scotch, and a beer might have to do it. In the meantime, we have the memories.

*Tom Galvin is a writer based in Wicklow, Ireland. Find out more on his website and Facebook page.