Sure the Irish love a bit of craic but perhaps these weeks without our pub culture might make us reconsider returning to life BC (before COVID). 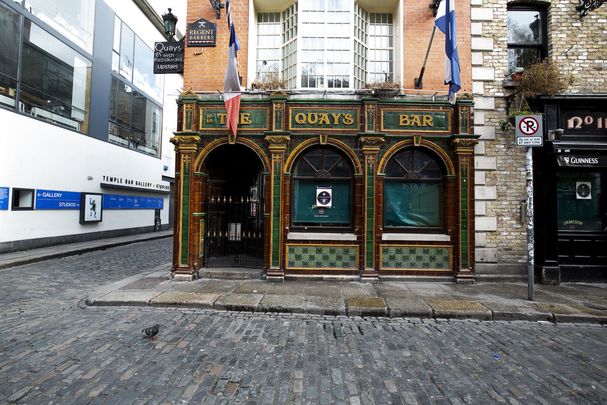 It's half an hour before closing time and the pub is heaving.  At the counter, drinkers are two or three deep vying to get the barman's attention for last orders. Everyone wants an armful of pints.  The noise level means you have to shout to be heard.

This is what Friday night used to be like in a busy city center pub in Dublin BC (Before Covid). Good luck with trying to impose social distancing on that.

It won't be possible, of course, which means that pubs here now face big changes whenever they open again.  For some people that will be a pity because it will mean the end of "the craic,” the highly charged atmosphere of blather, blarney, fun, and music that characterizes the Irish pub at full tilt.

For others, however, it will be a welcome transition into a more civilized and healthy future.

A friend lives near Temple Bar, the mecca for the craic in Dublin.   For her the past few weeks have been wonderful.   She can walk through the cobbled streets to her apartment late at night without having to step over broken glass and pools of vomit. 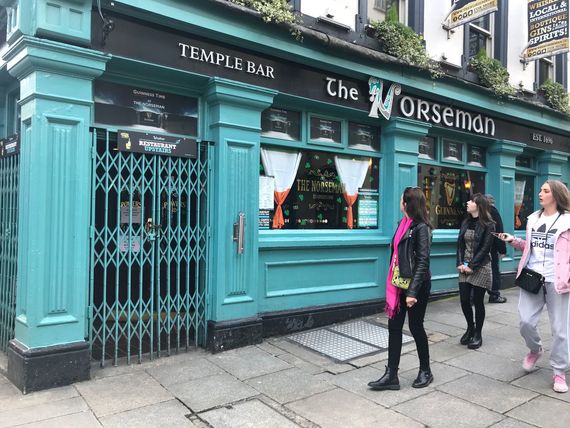 She does not have to contend with the "banter" from groups of guys "just having the craic" who can quickly become irritated and threatening when she does not respond.

She's a nurse who works in a city center hospital where the emergency department usually has to cope with aggressive drunks on weekends.   Wouldn't it be great not to have to deal with that again when things go back to normal, she says.

She is someone at the coalface.  But a lot of people here are now asking similar questions.

In the immediate future, our pubs will be very different and we won't have a choice in that until there is a vaccine.  But even then, a year or more from now at best, do we really want to go back to the same destructive relationship we have always had with alcohol?

The restrictions that will be necessary when pubs eventually reopen here give us an opportunity to change how they operate and how we behave when we are in them.  Maybe the restrictions should be permanent.

Maybe it's time for us to grow up.  Time for us to stop pretending that downing five or six pints in a couple of hours is acceptable and normal.   It's not normal in most other countries in Europe.

Irish pubs have been changing anyway in recent years.   It's not just about the pints anymore. 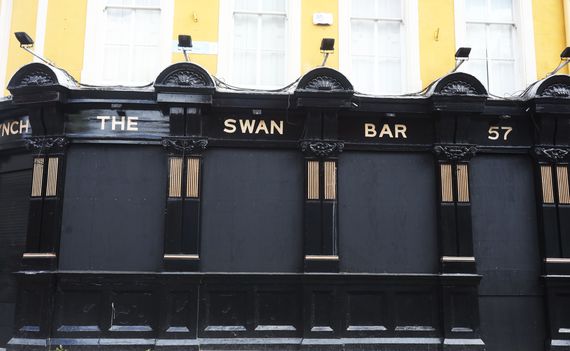 The Swan pub on Aungier Street.

There are more gastro pubs with extensive menus serving good food and coffee as well as alcohol. The restrictions that will be necessary when pubs reopen will accelerate that change.   But the social distancing requirements will also mean that the crowded conviviality that gives our pubs the buzz and the craic, especially on weekend nights, will be gone.

Pubs here closed on March 15.   Under the five-stage plan to reopen our economy and society again, they are not due to reopen until the last stage beginning on August 10.  When they do reopen they will have to enforce social distancing, and given the layout in many older pubs that will reduce the numbers inside to below what is profitable.

The organization of pub owners here has said that many of them won't survive.   The cost of the long shutdown, the social distancing when they do reopen and the extra cleaning and hygiene that will be required will make it impossible.

They are also unhappy that restaurants are being allowed to reopen in stage three, beginning on June 29, even though most of them also serve alcohol.   How is that fair, they ask.

Last week the pub owners produced a plan to allow them to open sooner than August 10.  This included making all customers sit at tables in small groups, with no one allowed to stand at the bar and strict control of numbers entering toilets.

Staff would wear masks and take orders and serve customers at their tables maintaining as much social distance as possible.   Some pub owners were promising to separate tables with screens or partitions.

The country's chief medical officer was unimpressed, however, and said he could not envisage pubs reopening in June at the same time as restaurants.   And despite the pleas of the pub owners, most of the politicians here supported this view.  The reality is that controlling the behavior of people in a pub is more difficult than in a restaurant and everyone understands why.

One way around the social distancing difficulty would be to allow pubs and restaurants to make immediate use of nearby outside space (pavements, parks, etc.) without having to go through the usual planning hoops.  Spreading their tables outside would obviously help.  Several cities in Europe, like Milan in Italy and Vilnius in Lithuania, are already doing this.

Last week the city manager in Dublin suggested closing off some streets in the city center to traffic, although that seemed to be aimed more at enabling social distancing for pedestrians and cyclists than helping the pub owners.   But it's an attractive idea, even if it would be trickier here because of the weather. 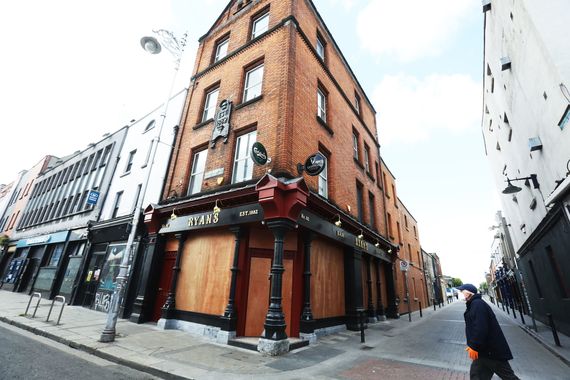 The reality for many smaller pubs here, especially in rural areas, is that they have only a few customers during the day so social distancing would not be a problem then.  Their trade is so poor that hundreds of them have closed in recent years, long before anyone heard of Covid-19.

But even these quieter pubs will now have a problem in the evenings because they depend on their night time trade when more customers come in and socialize together at the bar.

All of this is part of a wider issue we have here, which predates the virus and is more fundamental.  It begins with the restricted opening hours and enforced closing times, designed to protect us from too much access to alcohol and, in years gone by, to force the working man to go home to his family.  That used to be the rationale, backed up by the Catholic Church which also wanted pubs closed on Sunday mornings so people would go to Mass.

The more relaxed view in other European countries (and in New York) is that if you treat people like responsible adults they will behave that way.  By letting bars open when they want and remain open for as long as they want, you remove the panicky compulsion to get as much alcohol in as possible before the barman calls, “Time!”

You could argue that the rigid closing times here have the opposite effect than the one intended.   People here tend to go to the pub too late and then lash into the pints before the shutters come down a couple of hours later.

You don't see that the same frenetic behavior in other European countries where even young people have a more relaxed attitude.  They meet and talk in cafes and bars, where coffee, food, and alcohol are available around the clock.  It's the continental way -- the conversation is more important than getting as many pints down as fast as possible.

In this view, the very real problem our pubs now have with the shutdown and the restrictions that are on the way can be seen in two ways.  It can be seen as a disaster for our traditional pub culture here and a threat to the craic we love so much.  Or it can be seen as giving us time and space to reassess our pubs and our licensing laws and to figure where we should be going when all this is over.

Several reports done for the government here over recent decades have suggested that there is a better way of doing things.  One, in particular, recommended that we should move away from a licensing system that concentrates narrowly on pubs that provide mainly alcohol with very little food, apart from a sandwich. 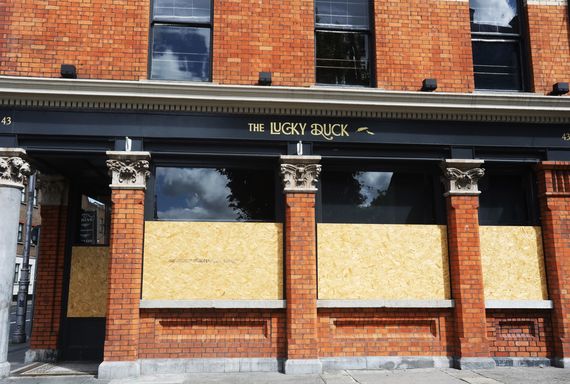 The Lucky Duck on Aungier Street.

Instead, it suggested that a different kind of license would be available to cafe bars, where the food would be as important as the drink and where all customers would have to sit at tables rather than standing at the bar.  Opening times would be decided by the cafe bar owner. A full menu would be available at all times.

It seemed like a good idea but it was opposed by the big pub owners who did not want any change that might reduce their takings.  So it never got anywhere.  Maybe it's time we looked at that kind of approach again.

There's nothing good about Covid-19.  The restrictions will be a pain for both drinkers and pub owners.  But if they prompt us to think about permanently moving away from the problems we currently have not just in Dublin but in towns all over Ireland after closing time at the weekends that might be welcome.

Apart from the fights, the public urination, the vomit, the menace in the air and the threats the gardai have to deal with, there are health issues, alcoholism, obesity, domestic violence, drink driving, chaos in hospital emergency departments, and so on.

We all love the craic.  But some of us have had enough of all that.