Gregory de la Haba, a bartender at the famous establishment, said that the bar will be offering a limited menu of burgers, sandwiches, and hot dogs. 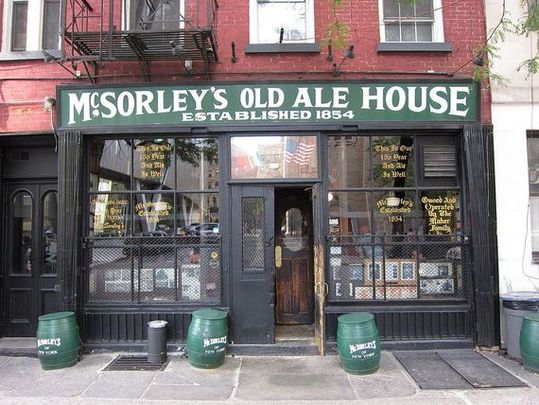 The Manhattan pub was shuttered for the longest time in its 160-year-old history due to the COVID-19 pandemic but is now operating a takeout service offering bar food and beer served in growlers - a type of glass or stainless steel bottle used to transport draft beer.

Gregory de la Haba, a bartender at the famous establishment, said that the bar will be offering a limited menu of burgers, sandwiches, and hot dogs.

The bartender, who is married to owner Teresa Maher de la Haba, told EV Grieve that all staff would be wearing facemasks and other PPE, and said that the staff had installed four hand sanitizing stations in the pub for any customers ordering takeout.

"Doesn’t quite go with the decor of the aged and charred wood but for now who gives a shit. Safety first," he told EV Grieve.

McSorley's will be opening from 1 p.m. until 8 p.m. daily for the next two weeks when the staff will reassess the pub's position based on New York City's reopening plans.

De la Haba said that the New York bar industry was in imminent danger due to the COVID-19 pandemic and said that plans to limit occupancy to 25 or 50% when they reopen could force a lot of establishments out of business.

"The uncertainty into the unknown is what’s driving most business owners mad. And the 25 or 50 percent occupancy will be the nail in the coffin for most — especially if it lasts more than one month."

It has been a particularly turbulent year for the oldest Irish pub in New York after longtime owner Matty Maher died from lung cancer prior to the COVID-19 pandemic in January.

Maher owned the bar from 1977 until his death earlier this year when the pub's ownership transferred to his daughter Teresa.