JK Rowling returned the Ripple of Hope Award due to criticisms of her stance on trans rights. 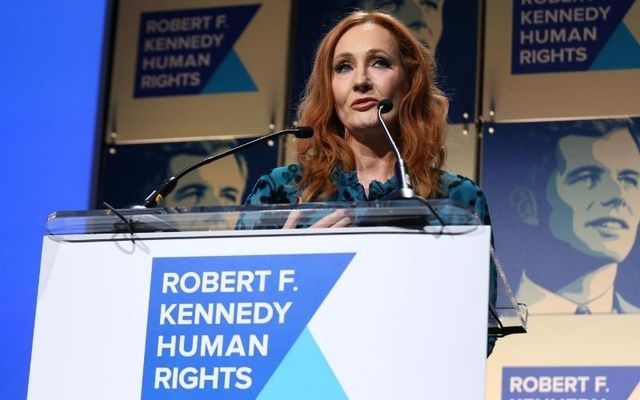 JK Rowling after she was awarded the Ripple of Hope Award last December. Getty

Rowling, who was awarded the Ripple of Hope Award in December 2019 for her work with children's charity Lumos, has been vocal about the transgender community, drawing criticism from Kerry Kennedy.

Kennedy posted on the RFKHR's website earlier in August to express her disappointment about Rowling's "deeply troubling transphobic tweets," especially during LGBTQ Pride Month this June.

Rowling wrote a series of tweets in June which appeared to attack the trans community. She claimed that trans women who have not undergone hormone therapy or surgical transition should not have access to single-sex spaces and also said that discussions about gender erased the lived experiences of women around the world.

"I take Rowling's position to be that the sex one is assigned at birth is the primary and determinative factor of one's gender, regardless of one's gender identity - a position that I categorically reject," Kennedy said.

Kennedy said that she has also talked with Rowling to express her "profound disappointment that she has chosen to use her remarkable gifts to create a narrative that diminishes the identity of trans and nonbinary people."

She additionally said that Rowling's comments undermined the integrity and the validity of the transgender community.

Rowling responded to Kennedy's comments with a post on her website on Thursday, confirming that she was returning the Ripple of Hope Award.

"Because of the very serious conflict of views between myself and RFKHR, I feel I have no option but to return the Ripple of Hope Award bestowed upon me last year," Rowling wrote.

"I am deeply saddened that RFKHR has felt compelled to adopt this stance, but no award or honor, no matter my admiration for the person for whom it was named, means so much to me that I would forfeit the right to follow the dictates of my own conscience."

Rowling also slammed Kennedy's statement, claiming that it incorrectly implied that she was transphobic and responsible for harm against the transgender community.

"RFKHR has stated that there is no conflict between the current radical trans rights movement and the rights of women," Rowling wrote, adding that thousands of women have reached out to her to express their support for her argument.

The famous author said that she "absolutely refutes the accusation" that she hates the trans community or wishes them ill and said that her attempts to stand up for women's rights were never discriminatory.