Pro-soccer player James McClean and his wife Erin are calling upon the media to highlight the anti-Irish abuse they've received for nearly a decade. 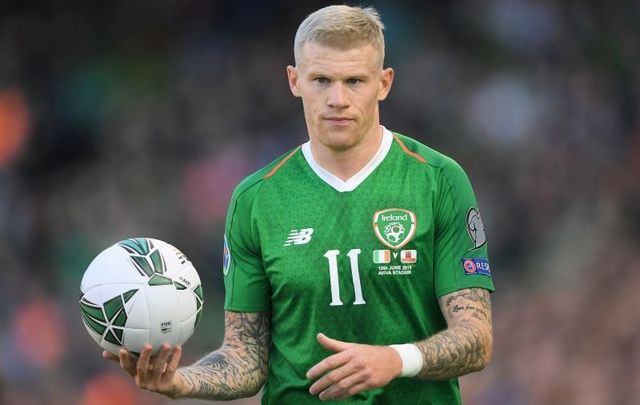 James McClean, a native of Derry who is a midfielder for the Republic of Ireland's men's team as well as the English professional football club Stoke City, has been the target of anti-Irish abuse ever since choosing to not wear a Remembrance Poppy.

In an Instagram post shared on February 12, James McClean noted that while the recent media coverage and condemnation of discrimination are "great to see," he questions why anti-Irish abuse isn't being highlighted.

“Make no mistake about it or to take anything away from that but just to pose the question really, racism, gender, ethnic ... the list of discrimination that goes on is unacceptable right, my question is here... does being abused for being Irish and anti-Irish abuse acceptable? Is it not popular enough to be seen to be knowledged or spoke out about too?

“I have highlighted the abuse publicly on social media recently and the silence from everyone is deafening!

“If you are offended by me saying that then maybe that tells you something.”

He finished his post with a  quote from Irish hunger striker Bobby Sands: "We are not criminals, we are Irishmen! This the crime we stand accused."

Just two days later on February 14, McClean shared on his Instagram stories a threat he had received in his direct messages that read: “God I hope for everyones sake you just f--k off outta this world” followed by three Union Jack emojis.

The message added: “Don’t make me set your house on fire and burn everyone inside of it.”

The following day, McClean’s wife Erin, also a native of Derry, issued a lengthy statement on both Twitter and Instagram where she wrote that while she and James are not affected by the barrage of abuse they've received for nearly a decade, she is concerned for the couple's three young children.

“Of course we have tried as hard as possible to keep them away from it all," Erin wrote, "but there has been times we are out shopping and there is people making remarks towards James in front of the kids.

“We can take the name calling and the rest but what we cannot accept is threatening our family home and our children’s lives. They don’t deserve this.

"Why after 9 years of constant abuse should we be ok and have to accept receiving these threats constantly.

"People ask me how do you deal with it and I always say ah we’re well used to that now but why should we be? Why should we have to read messages like that daily for almost a decade.

“We’ve been spat at, shouted at, nights out have been ruined by people making remarks towards him. I even remember once someone threatened him saying they were taking a gun with them to a certain match and I can still remember watching that match in absolute fear on the tv.

Erin said that "except for a select few," the media "shies away" from speaking up for her husband James.

“Every single article over the years that’s been written about James (whether good or bad) has ALWAYS brought the poppy into it. He may have just given to a charity but they always make sure to mention ‘it’s that one that doesn’t wear the poppy."

(In 2015, James wrote: "If the poppy was simply about World War One and Two victims alone, I’d wear it without a problem. I would wear it every day of the year if that was the thing but it doesn’t. It stands for all the conflicts that Britain has been involved in. Because of the history where I come from in Derry, I cannot wear something that represents that.”)

In her online post, Erin continued: “It was almost 10 years ago. The media can certainly control public opinion."

She added: "Many don’t understand his beliefs and that is completely fine we don’t expect you to understand but those people who judge him for that do not know or try [to] understand where we grew up and the history of our city. If they did they would see past his decision and judge him solely on his football.

“But the internet these days is a scary place and anyone can write a threat to someone, my concern is if only one of those people throughout the years really meant it. What happened to being kind? It only works when it suits a specific narrative. Some people can only take so much abuse given towards them and so many unnecessary and tragic things have happened in recent years from people on the receiving end.

“We’re lucky we can see past it and we have some of the best support from family, friends and strangers.”

Watching him deal with this his entire career, so just having my say after 9 years of constant abuse. pic.twitter.com/5nEyujhpZw

Within a few hours of Erin McClean’s statement on Twitter, FAI Ireland responded with their own statement pledging their support to the Irish soccer player.

FAI CEO Jonathan Hill said: “The FAI remains committed to safeguarding all of our players against any form of abuse on any social media platform. To abuse or threaten James or any player because of his nationality should not be tolerated by society. Unfortunately, such behaviour is all too common now on social media.

“Only last week we commended the stance taken by English football against the abuse of footballers across all social media channels and we are examining how best we can take a similar stance.”

"The latest incident involving James and his family highlights how important this work is and why football needs to take action,” commented Des Tomlinson, the FAI's Intercultural Programme National Co-ordinator.

“In recent times many of our players have been victims of social media abuse, hate speech and threats including Jonathan Afolabi, Cyrus Christie and James. It is not acceptable and I will assure James of our full support as he deals with this.”

James responded to the tweet with an Irish flag and green heart emoji: