Ireland international soccer player James McClean has shared images of a disturbing hate-filled birthday card he received in the post. 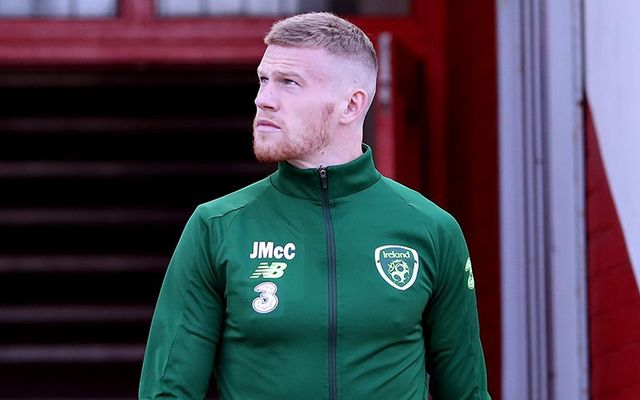 McClean, who turned 30 on April 22, said the card was delivered to the training ground of his Premier League club Stoke City.

The Co Derry man tweeted pictures of the card which calls him a "Fenian subhuman bastard" and wishes him a "Happy Birthday and die on April 22."

The card leads with a reference to Provisional Irish Republican Army member Bobby Sands who died on hunger strike while imprisoned at HM Prison Maze as the 1981 "Slimmer of the Year."

“You don’t like this country and we don’t like you. It’s about time these gutless English managers stood up to you and tell you to get back to shithouse called Derry.

So you are fucking Irish international, any body can play for fucking Ireland. They give caps out in cornflake packets and you have to drink that muck called Guinness that qualifys you.”

The fucking Irish will do anything for poxy Ireland, except live in that shithole.

The Irish are a race of inbred, subhuman parasites breed like maggots.

Should have been 13,000 of you sub human bastards.

“What this country needs is somebody called Hitler. He would have sorted the IRA in a month. “When caught they would have been strung up by piano wire. Not put in holiday camps like Long Kesh Maze.

"They should have put the Waffen SS in Ireland. They would have used scorched earth tactics not like British politicians licking IRA arses."

McClean posted images of the card to Twitter under the caption: "No words needed."

Kick It Out, the organization which supports equality in football has released a statement in support of James McClean, condemning the recent spate of sectarian abuse he has been subjected to:

Our statement on the sectarian abuse James McClean continues to face: https://t.co/QynhVa25Qu#KickItOut pic.twitter.com/NCIcNTGZBI

McClean has become a highly controversial figure in the UK since his breakthrough into the Premier League in 2012.

The Republic of Ireland star has refused to wear the “remembrance poppy” every year when playing games on or near Remembrance Day (November 11) or Remembrance Sunday (the nearest Sunday) which is a memorial day observed in Commonwealth member states and some non-Commonwealth states to remember members of their armed forces who have died in the line of duty.

McClean's objection derives from his affinity with the people of Derry and the role of the British Army in The Troubles.

He grew up on the Creggan estate and on Bloody Sunday in 1972 six people from that area were slain.

He has said he would wear the poppy if it was restricted to honoring only soldiers who died in the World Wars, many of whom were Irish, and he has insisted his position is one of peace, and not any kind of wider political, religious or anti-British point.

McClean has been booed by supporters of opposition clubs as well as some of his own club's supporters and after the first refusal, received sectarian abuse and loyalist threats, including death threats.

How do you feel about these attacks on Ireland footballer James McClean?
What are your thoughts on him not wearing the remembrance poppy?