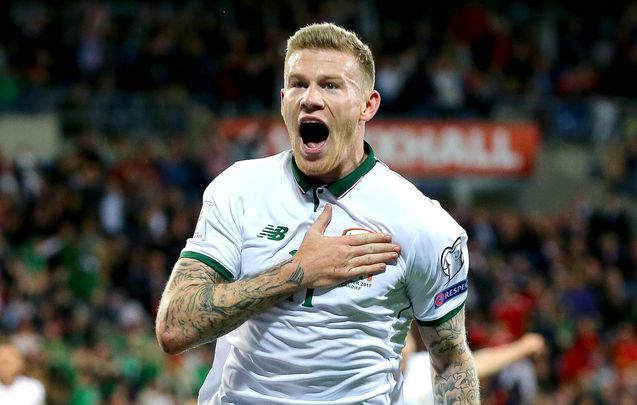 Taoiseach Leo Varadkar wore a poppy – the shamrock version – in the Dáil. James McClean is not so inclined.

And the Republic of Ireland international soccer player is paying a price for his refusal.

The English Football Association is examining claims that fans of Huddersfield Football Club threw bottles and coins at McClean during a game last Saturday.

The Derry man, who plays for West Bromwich Albion, came on as a substitute during his team’s the weekend Premiership defeat and picked up a yellow card for his challenge on Huddersfield’s Tom Ince.

That incident was later highlighted on the BBC’s Match of the Day show.

However, the 28-year-old midfielder said it was “convenient” how the program’s cameras picked up on his tackle but “fail to pick up bottles, coins and lighters been throwing in same incident.”

In a post on Instagram he said “frustrating is the best word to describe today” adding “PS launching bottles and other objects from up in the stands make you cowards, not hard men.”

Frustrating is the best word to describe today.. p.s launching bottles and other objects from up in the stands make you cowards not hard men 👏🏻

It’s a recurring theme for McClean around this time of year as he refuses to wear a poppy embroidered on his football shirt in the run-up to Remembrance Day in Britain, November 11.

The poppy flower symbol is used to commemorate British military personnel who have died in war.

McClean has had death threats in the past because of his decision not to wear the poppy.

Three years ago, the Derry man explained to his then chairman, Dave Whelan at Wigan Athletic, why he had decided not to wear a poppy.

In a letter he wrote: “I have complete respect for those who fought and died in both World Wars – many I know were Irish-born.

“But the poppy is used to remember victims of other conflicts since 1945 and this is where the problem starts for me.

“For people from the North of Ireland such as myself, and specifically those in Derry, scene of the 1972 Bloody Sunday massacre, the poppy has come to mean something very different.

“Please understand, Mr. Whelan, that when you come from Creggan like myself or the Bogside, Brandywell or the majority of places in Derry, every person still lives in the shadow of one of the darkest days in Ireland’s history.

“Mr. Whelan, for me to wear a poppy would be as much a gesture of disrespect for the innocent people who lost their lives in the Troubles – and Bloody Sunday especially – as I have in the past been accused of disrespecting the victims of WWI and WWII.”