Ireland’s Prime Minister reopened a century-old debate about the honoring the Irish killed during World War I while fighting with the British. 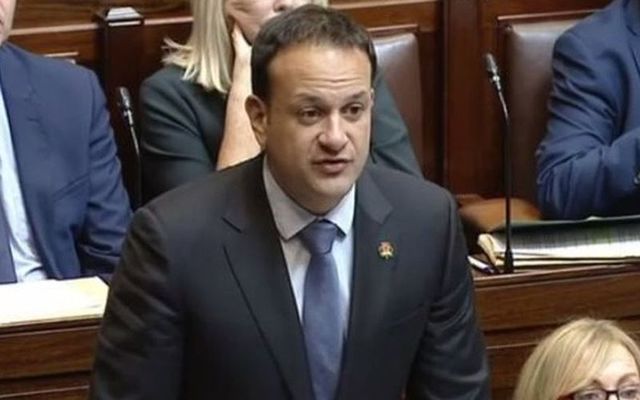 Ireland's Taoiseach Leo Varadkar wearing a shamrock poppy to honor those Irish who died during World War I. Oireachtas.ie

Ireland’s Taoiseach (Prime Minister) Leo Varadkar has reopened a century-old debate about the honoring of Ireland’s war dead after he was spotted wearing a commemorative shamrock poppy in the Dáil yesterday.

The red poppy was the first flower to grow out of the mud of the Great War’s battlefields and became a symbol of remembrance across the British Empire in the years after the war’s end (although the tradition started in the US it has largely faded here). The shamrock is one of Ireland's most recognized symbol.

Varadkar was given the pin, which has a red poppy emblazoned over a green shamrock, in the run-up to Remembrance Day (Armistice Day) this weekend when the casualties of the Great War are traditionally remembered.

"The Taoiseach was given the shamrock poppy by Senator Frank Feighan and the issue has also been supported by Senator Neale Richmond,” a spokesman for the Taoiseach said.

"The Shamrock Poppy recognizes Irish soldiers who fought in World War I. It was commissioned to commemorate the 100th anniversary of the Great War by the Irish branch of the Royal British Legion to remember the 206,000 Irishmen that fought, 26,500 of whom died in battle."

Money raised from the sale of shamrock-poppies goes to help Irishmen and women who served with the British Armed Forces, but the symbol is controversial because of its association with Britain.

Included in the remembrance are members of the British Army who fought in Northern Ireland during The Troubles. Irish soccer star James McClean who, plays in Britain refuses to wear a jersey with a poppy symbol because of Bloody Sunday in his native Derry. Other critics have claimed, "poppy fascism" forces people to remember a horrific conflict that should never have happened.

In the 1920s, with memories of the conflict still raw, Armistice Day ceremonies were attended by thousands both north and south of the border.

At one point half a million poppies were sold in the new Free State, but most Republicans hated the sight of it and “poppy snatching” became a common sport in early November.

As memories of the conflict faded and the immediate relatives of the dead died off, so attendance at Remembrance Day events in the Republic plummeted.

There has been a noticeable resurgence of interest in recent years due to the centenary of the conflict, although poppies are still seen far less than they were in the Ireland of old.

As President of Ireland, Mary Robinson began a tradition of attending the Remembrance Sunday service at the Anglican St Patrick’s Cathedral in Dublin.

Her successor, Mary McAleese and Queen Elizabeth II officially opened the Island of Ireland Peace Park in Belgium on Armistice Day 1998 in memory of the Irish servicemen, from both north and south, who fell in the Great War.

President Michael D Higgins has, like his predecessors, attended Remembrance Sunday and centenary events but none of those three presidents ever wore a poppy.

Yesterday, as such, was the first known instance of either an Irish head of state or government wearing a poppy and reactions on social media were decidedly mixed.

The poppy worn by Varadkar today just happens to resemble a bloody bullet hole shot into a shamrock. No symbolism here folks... pic.twitter.com/TYU8UbKKXP

Leo Varadkar, Irish Taoiseach with Indian roots, nations who suffered brutally under British Imperialism & its armies. And he wears a poppy? pic.twitter.com/K3rhMfKogA

I was glad Leo Varadkar wore the shamrock poppy today in remembrance of 50,000 Irishmen who died fighting in WW1. Those men deserve honoring

Leo Varadkar wore a poppy in the Dáil today; not the behaviour of someone fit to lead a republic.

Thank you @campaignforleo for commemorating those Irish (and French) men who fought for our nation in WW1. #shamrockpoppy pic.twitter.com/l6lHuFhcJE

Delighted to see the Taoiseach commemorate young men like my great uncle Pvt. John McMahon who left the Liberties to fight for others liberty in Belgium but never came home. #WeWillRememberThem https://t.co/qIaR3x0UmW

Do you think it appropriate for the Taoiseach to wear a shamrock poppy? Tell us in the comments below.