Letters sent home to Ireland from World War I

Review of 'Messines to Carrick Hill: Writing Home From the Great War' by Tom Burke 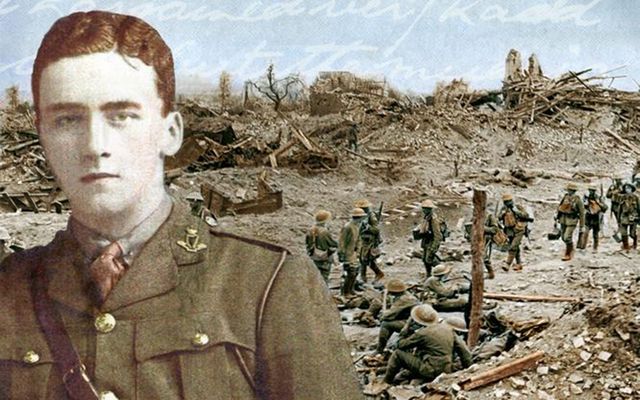 Cover art for "Messines to Carrick Hill: Writing Home From the Great War".

Like so many young people of his era Wall, who hailed from a happy middle-class family in Carrick Hill, north Co. Dublin, was seduced by the thought of high adventure and glory in the front lines of France and Belgium.

But his youthful ardor soon cooled when he reached the smoking battlefields and saw the daily unspeakable pointless slaughter. The harsh reality awaiting him and tens of thousands of other young men quickly cured him of his romantic fantasies.

The utter betrayal of the World War I generation to the murderous war machine is a subject we should tell and retell until the end of time, to lament their cruel fates and perhaps give some pause to our own gung-ho compatriots.

Burke uses Wall’s own vivid letters as his primary source and follows the handsome young officer’s progress on the southern end of the Ypres salient.

From wanting to go to war and see the wider world, soon all the disillusioned young Wall wanted to do was go home.  He writes about St. Patrick’s Day and how it passed almost unnoticed at the front. He writes about the friends of his youth he encounters on the front lines.

At home, his mother was having Masses said for him to bring him safely back.   She kept every one of his letters in a dedicated tin box, even when they had nothing much to say or report, because they were living links to him. She treasured that.

Each time the postman arrived she prayed to hear a new report from him. Then one day in June 1917 an official looking envelope arrived bearing her name.

She sat down at the table with her heart racing, Burke writes. Written over the top of the letter were the words, “Telegram. No Charge for Delivery.”

Youth, when it’s prevented by war from reaching full maturity, stands among the worst tragedies that life can offer us. The perfunctory words must have felt like a slap.  Burke takes one Irishman’s story and manages to quietly convey the epic scale of the whole tragic enterprise.