Wild world of nuns - from bank robberies to Hollywood

“Holy Hell! Nuns behaving badly is 2017’s most surprising trend"... Bill Donohue will have his work cut out for him. 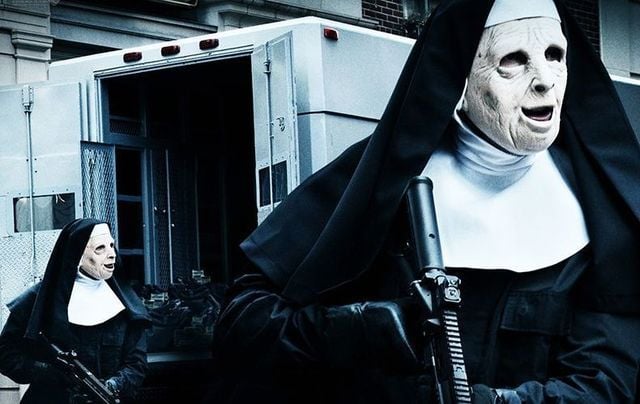 Still from the Boston heist movie, The Town.

A few weeks back a pair of women -- one wielding a pistol -- walked into a Pennsylvania bank dressed as nuns and held up the joint.  The incident recalled the excellent 2010 crime movie The Town, about Boston Irish bad boys (Ben Affleck, Jeremy Renner) living on the wrong side of the law.  Part of their own bank-heisting plans involved them dressing up as -- you guessed it -- nuns.

Well, bank robbing is about the only thing we haven’t seen nuns -- many of them Irish -- do recently in books, movies and TV shows.

Featuring a cast of hipster comics -- John C. Reilly, Alison Brie and Dave Franco -- and based on Giovanni Boccaccio’s also-raunchy The Decameron, this is easily one of the most unlikely movies in recent memory, gleefully reinforcing and undermining all kinds of religious stereotypes.

But the sensationalism peddled by The Little Hours and Vanity Fair misses a much more important trend: Nuns behaving just like normal human beings!

Flawed, confused, noble, petty. A host of recent books, movies and TV shows diverge from tired old stereotypes about the lives of nuns, which, as The New York Times noted last week, “tended toward the Gothic or the pornographic.”

The days of sadistic or scary nuns -- from anti-Catholic captive narratives like The Awful Disclosures of Maria Monk right up to the recent TV show American Horror Story: Asylum -- may not fully be behind us.

But we are finally starting to get rich, complex portraits of nuns, even if it is a few decades after authors such as J.F. Powers, Edwin O’Connor and Graham Greene similarly changed how we think about priests.

The novel opens with a tragedy involving an Irish immigrant and his Irish American wife, who is befriended by Sister St. Saviour, “a Little Nursing Sister of the Sick Poor.”  What follows is a wondrous journey of faith, parenting and survival.  Fittingly, McDermott dedicated the book to “Sister Mary Rose, C.I.J.”

Then there is author J. Courtney Sullivan, who featured an Irish immigrant nun with a secret, trying to resolve the past with the present, in her recent best-selling novel Saints for All Occasions.

Sarah Dormet offered up a conflicted nun, serving at times as a parent, at other times as an older sister, in her unjustly underrated 2016 novel The Guineveres.

Then there is the recent Netflix documentary The Keepers, which captured the way young nuns in the late 1960s made life-long connections with students in the wake of Vatican II reforms.  It is easy to focus on the tragedy at the center of The Keepers.  But this is also a warm story about Sister Cathy Cesnik who, in a very short time, influenced some of her young females students in a profound way.

Donohue’s probably no fan of The Conjuring horror movie franchise, which is also planning several future films around nuns (one of which is simply titled The Nun).  These will surely be exploitative and schlocky.

But we can take solace in the fact that Oscar-winning Hollywood producer Scott Rudin recently purchased the movie rights for The Ninth Hour. Even Donohue may like that one.