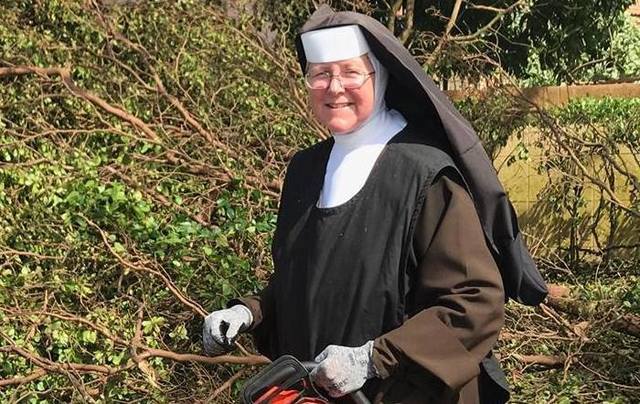 A video has emerged in the aftermath of Hurricane Irma of a chainsaw wielding nun in the western suburbs of Miami which has caught people's attention across social media.

This nun took a chainsaw in hand to help clean up debris from Hurricane Irma https://t.co/noNcbZBrgT https://t.co/r6bixPDJx5

Sister Margaret Ann, 30-year education veteran from Archbishop Coleman F. Carroll High School in West Kendall, was captured on camera by an off-duty police officer as she used a chainsaw to clear debris from a fallen tree, which was dangerously blocking an adjacent road.

The influential nun had no second thoughts about rolling up her sleeves, donning her habit and taking matters into her own hands. Sister Margaret Ann was able to retrieve a chainsaw from a closet in her High School and took to her task.

During an interview with CNN, Sister Margaret Ann was determined to do her part and help in any way she could. "There was a need, I had the means, so I wanted to help out. We teach our students: Do what you can to help other people, don't think of yourselves. That's what I wanted to do….The community will come out and help us. That's what we do. It's good."

When the off-duty officer informed Sister Margaret Ann that the police would take care of debris she simply replied, “It's going to take them too long, it's dangerous, people are going to get hurt here."

Countless rescuers and emergency services have been working tirelessly in the wake of the devastation left by Hurricane Irma which tore its way up through the state of Florida. Millions of people are without power, with homes and livelihoods destroyed. The extent of the damage is beginning to unfold with no estimation on how much it will likely cost to repair.

As for Sister Margaret Ann, she is looking forward to getting back to work. Her school has no date for reopen as it was damaged during the hurricane.