Foster and her DUP regarded the “regulatory alignment” agreed between the EU, Britain and Dublin as a “united Ireland economy.” 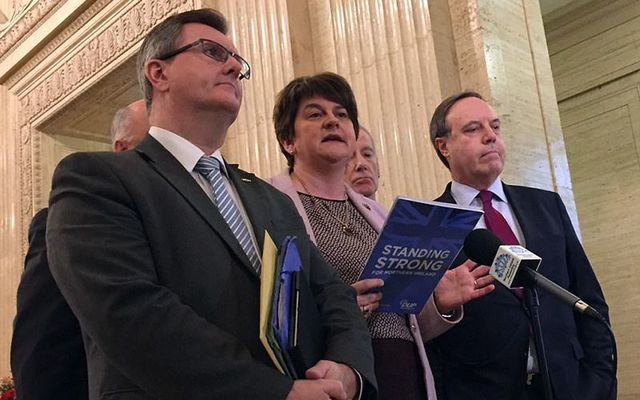 The Democratic Unionist Party (DUP), whose 10 MPs prop up the British Tory government, have said no to a vital Irish Brexit border deal, and on Tuesday, DUP leader Arlene Foster refused to fly to London to meet with British Prime Minister to seek compromise.

With a deal on the border agreed and about to be announced at press briefings in Dublin and Brussels on Monday, it was scuppered at the last minute when May’s lunch with EU Parliament President Jean-Claude Juncker was interrupted by a phone call from Foster.

Foster and her DUP regarded the “regulatory alignment” agreed between the EU, Britain and Dublin as a “united Ireland economy.”

The regulatory alignment phrase, essentially covering commercial regulations on each side of the border, was agreed by diplomats to satisfy a complicated and sensitive debate on the Irish border. The alignment would have meant the same EU standards for goods and trade would have continued to apply in Northern Ireland after the U.K. exit from the EU.

But Foster was having none of it. She wants Northern Ireland treated exactly the same as the rest of the U.K. in the withdrawal from Europe. She appeared set to demand May do a different deal or else risk having the DUP withdraw from the arrangement in which it props up the Tory government.

Now, May has just a few days to convince Foster that commitments given to regulatory alignments in the wake of Brexit are not akin to splitting up the U.K.

When or if the issue over the Irish border is finally settled, the talks are due to move to phase two, mainly about trade, next week.

Taoiseach Leo Varadkar virtually accused Britain of reneging on the deal, but he added that he was prepared to give May more time.

He said on Monday evening, “I am surprised and disappointed that the British government now appears not to be in a position to conclude what was agreed earlier today. I accept that the prime minister has asked for more time, and I know that she faces many challenges and I acknowledge that she is negotiating in good faith.”

Tanaiste and Minister for Foreign Affairs Simon Coveney said on Tuesday that the Irish government would not reverse away from the Brexit border deal that was in place on Monday.

But he said the Irish government was prepared to work with the British government on “presentational issues” around the text which had been agreed on the border, but the core meaning must remain.

The DUP has said that, like all other parties, it supports the proposition of a “soft” border, and that can be still achieved while Northern Ireland is treated exactly the same as every other part of the U.K. during Brexit negotiations.

But Sinn Fein deputy leader Mary Lou MacDonald, expected to take over as leader of the party after Gerry Adams’ resignation in the New Year, said the DUP has been on the wrong side of the Brexit argument from the beginning and appealed for them to “step back” from their position.

“I would appeal to the DUP to understand this is not a case of orange versus green. This is all of us on this island protecting ourselves and protecting each other,” she said.

Former U.K. Foreign Secretary Malcolm Rifkind said that absolutely correct wording could clear up the crisis and have an agreement done before the end of the week.

“Neither side wants there to be a hard border so the question is to clarify the precise wording of what is in the text, hopefully to reassure the DUP that the existing wording is okay,” he said.

It is unknown when or even if Foster and May will speak about the border issue.

“Arlene will come in when they are close to agreeing something. There is such a level of work to be done at the moment – it is not at a stage where Arlene would be involved as leader,” a source told the Daily Telegraph newspaper on Tuesday.