If the EU and the UK fail to reach a trade deal by the end of the year, the impact would be devastating. 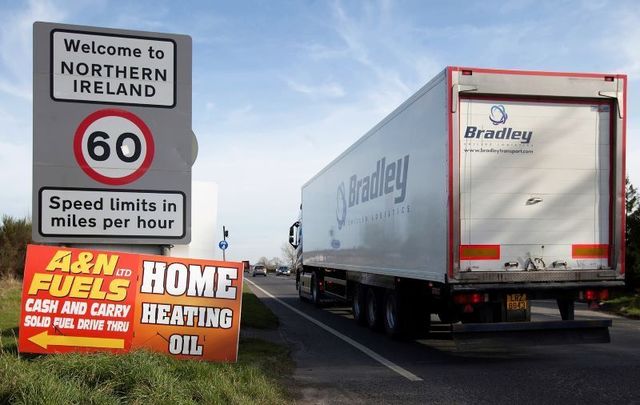 March 24, 2017: Bridgend Village in County Donegal, the most direct crossing from the Republic of Ireland into Derry City. RollingNews.ie

Time is running out to secure a trade deal between the UK and the EU.

Last week, British minister Michael Gove, a prominent Brexiteer, released a letter that caused widespread alarm in the UK. In a letter to UK business leaders, Gove warned that failure to prepare for new customs requirements after Britain completes its departure from the EU on January 1 would cause chaos at UK ports.

In the worst-case scenario in which the UK and the EU fail to reach a trade deal before the end of the year -- which looks more likely with every passing day -- there could be 7,000 trucks lined up on the motorway to Dover in the south of England waiting to get on ferries to Calais in northern France, he warned. Delays could run into days. The impact of that on trade would be devastating.

How has this situation come about? The one-year transition phase before Britain's departure from the EU preserved the status quo on the free movement of goods between the UK and Europe. With the trucks still rolling on and off the ferries, British businesses have been complacent.

Most of them were against Brexit anyway and have been hoping that a comprehensive trade deal would be agreed upon. So they have made little preparation for the consequences of a UK crash out.

If that does happen, Britain will suddenly be out of the Customs Union on January 1. Free movement of goods will end abruptly. The EU will require paperwork and documentation from every truck that wants to get into Europe.

In a no-deal scenario, Britain will be treated like any other global country under World Trade Organization rules. The days of loading British exports on to a truck which can then travel freely into the European Single Market will be over.

This will be a huge problem for British exporters who are used to the freedom they have enjoyed while the UK was part of the Single Market. Suddenly there will be customs tariffs and load inspections, and permissions and clearances will be needed before trucks can get on a ferry for the EU.

If all this complex paperwork and online work is not done properly in advance, trucks will be stuck for hours, perhaps days, at Dover and other ports. The result, according to Gove, could be a back up of thousands of trucks in a jam on the motorway leading to Dover. Chaos would ensue and exports would grind to a halt.

The purpose of Gove's warning was two-fold. First, he wanted to scare British business with the reality of what lies ahead if the U.K. crashes out of the EU without a trade deal. He wants them to wake up, familiarize themselves with the paperwork they will have to do, and get ready.

Secondly, he wanted to send yet another message to Europe that if a good trade deal is not forthcoming, the UK will be ready to leave the EU without one.

All of this made headlines in the UK last week. But it also raised concerns in Ireland because this scenario has worrying implications for us as well.

Verona Murphy, an independent member of the Dáil who is a former executive in the Irish Road Haulage Association, warned that we could be heading for a serious disruption in trade. And just like our British counterparts, Irish businesses (and the Irish government) have been pinning their hopes on the UK getting a last-minute trade deal instead of preparing for the chaos that will follow if there is a UK crash out.

The problem for us is that it won't just be British trucks that will be caught up in the jam. It will be Irish trucks as well. Dozens, perhaps hundreds of them, every day. Over 80 percent of our exports to the EU, worth more than €18 billion a year, goes by trucks using what is called "the land bridge."

Some attempts have been made in recent years to improve the existing infrequent direct ferry services for trucks to Europe but they have been less than successful. The EU has provided some funding but we are way behind where we need to be.

The reason, as we said, is because it's cheaper for trucks to use the land bridge. So rather than plan for a future in which the UK might crash out of the EU, we have done little apart from hope for the best.

This movement of Irish trucks through Britain -- around 150,000 trucks a year -- has been facilitated by what is called the Common Transit Convention which allows our goods to travel through the UK without having to go through any customs or inspections. Irish trucks are deemed to be goods in transit and on that basis are allowed to travel straight through without restriction. Under these rules, Irish trucks heading for Europe have 15 hours to complete their journey through Britain.

The government here seems to be confident that this arrangement can continue into the future even when the UK is out of the EU. Given the way the British have been behaving recently, however, that may be highly optimistic. What's in it for them?

And even if the British government was willing to allow Irish trucks to continue to transit the UK without restrictions, there is one big problem -- British truckers. If the predicted chaos and miles long truck lines at the ports do emerge after January 1, does anyone seriously think British truckers would be happy to see Irish truckers being waved through?

The reality is that Irish trucks would be expected to join the lines like everyone else. And if they are, they could be in the UK far longer than the 15 hours permitted under the present arrangement, assuming the British government allows that to continue. That itself would have consequences.

None of this may happen, of course. Although time is running out, the UK and the EU may yet agree on a trade deal. But unless it's a very comprehensive deal that equates almost to free trade this problem is going to emerge to some degree.

If it's a minimal deal there will be long delays and mountains of paperwork.  And because of our dependence on the land bridge to get more than 80 percent of our exports into Europe, we will be seriously affected.

We should have been preparing for this possibility since the UK voted to leave the EU in June 2016. We should have been expanding direct ferry services to Europe, with bigger and better ferries exclusively for trucks and vastly improved port facilities to handle them. Since the ferry companies and haulage companies are mostly private businesses this was not done because of uncertainty about the future and because the truckers continued to favor the land bridge.

It's now very late in the day to be playing catch-up. But direct ferry services to Europe for trucks carrying our exports will be essential whatever happens.

Even if the land bridge remains open to us, we should not be so dependent on indefinite British goodwill into the future. We cannot leave ourselves so vulnerable to a British change of mind.

From a US perspective, all this may seem like a minor matter in comparison with the UK's recent shifting position on the guarantee that there will never be a border in Ireland again, whatever happens with the deal. But is it?

The impact on Irish exports would be immediate and catastrophic if the land bridge is suddenly closed to us or becomes unworkable. In contrast, an Irish border would be a security problem but would not have the same impact on jobs and exports.

As you may know, there is now just over two weeks left for the UK-EU talks to make progress and produce a trade deal. Although the UK transition period does not finish until the end of this year, any deal that is agreed will have to be approved by the other EU member states and the EU Parliament, as well as by the British Parliament.

Because of the time this will take, the effective deadline for the talks is not the end of this year but the middle of October. Slippage to the end of October might be possible but beyond that, the process will be out of time.

The unfortunate reality is that the Covid battle has distracted everyone from this critical matter. The absolute necessity of making a trade deal between the UK and the EU is no longer the top priority. Beating the virus is -- and that is understandable.

This is particularly true of the British, and there is a growing sense that if they are not offered a good enough deal they will throw their hands up and walk away into a crash out. And for Ireland that would be the ultimate disaster.