Trump the Nationalist and Irish education - don’t know much about history?

"Those who do not learn history are doomed to repeat it" - from Donald Trump to  Ireland and the Irish in America this is revealing itself to be frighteningly true. 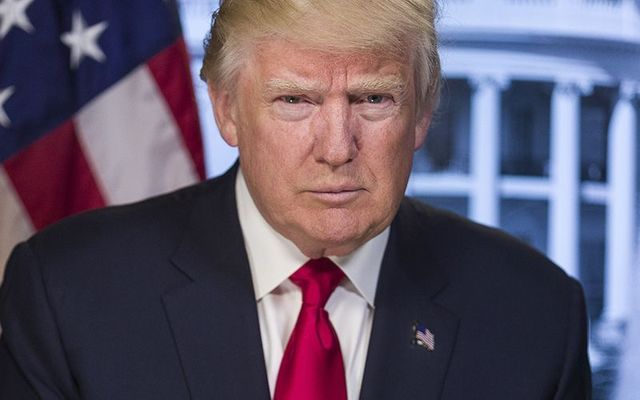 The first official portrait of the President of the United States, Donald Trump.

"Those who do not learn history are doomed to repeat it" - from Donald Trump to Ireland and the Irish in America this is revealing itself to be frighteningly true.

As if that’s not bad enough—by which I mean, you don’t need to say it three times with an exclamation point, Mr. President—The New York Times not only went and took the bait but did so with vigor and gusto.

“As a general rule, presidents do not refer to themselves as a ‘nationalist’ given the freighted history of the word,” the Times subsequently reported/preached, in only the way The New York Times can.

“Typically, the term ‘nationalist’ is employed by the United States government to describe political figures and forces in other countries that sometimes represent a threat,” added Times White House correspondent Peter Baker.

“When used domestically, it is a word often tainted with the whiff of extremism, not least because a variant of it, white nationalist, describes racist leaders and groups. American politicians traditionally stick with the safer term ‘patriot.’”

And so goes the merry-go-round of the Trump years, each side determined to play their role to the point of caricature.

But I will give The American Conservative this: alongside some silly stuff in defense of our idiotic president—idiot...idiot! —are some thoughtful musings which I may not agree with, but at least force me to do a little bit of thinking.

So it was in that spirit that I read “When Irish Eyes are Closed to History,” posted on the magazine’s website recently, and written by John Rodden (who “received his Ph.D in Grammar and Rhetoric from the University of Virginia” and is “an authority on George Orwell”) and John Rossi, professor emeritus of History at Philadelphia’s La Salle University.

The authors lament recent changes in Ireland’s national learning standards, which no longer require students to learn the basics of Irish history.

“Perhaps no country has been so haunted by history as Ireland,” the authors write.

“You will not go far before stumbling across a heated debate, abetted by a few mugs of Guinness, not only about the War of Independence and Civil War, but even the Battle of the Boyne in 1690, where Protestant King William of Orange versus defeated Catholic King James II. You might even hear an exchange about the Norman invasion of Ireland in 1169, which marked the beginning of more than 800 years of British occupation—or, er, involvement—in Ireland.”

I really should have stopped reading at the reference to Guinness “mugs.” Nevertheless, the authors were kind of on to something.

They speculate that powerful forces hope that “historical amnesia will soon set in and nobody will remember 1922 or 1916. And so the nation’s long-standing and still-simmering antagonisms between Catholics and Protestants, and Irish and Scots-English, will gradually dissolve of their own accord."

The ironic thing here is this: if the Irish in Ireland are drowning in an ocean of history, the Irish in America float thirstily and obliviously above the churning waters of the past.

In the name of bipartisanship, let me state here and now that while I have little use for much that is spoken in the name of conservatism, I hereby endorse the message of Professor Rossi and the good grammar Dr. Rodden.  So much so that, in my humble opinion, they don’t go far enough. Where is the nationalism in their message!

Ireland is all well and good, but it is, after all ...  Ireland.  Another country! Not America. Let’s educate the Irish in America about their past!

Remind those with names like Hannity and O’Reilly about the horrors of the Famine, and Tammany Hall’s invention of welfare as we know it.

After all, if we don’t study this history, we may actually have to deal with it.