British election followed the pattern of recent results in France and the United States where conventional wisdom was turned utterly on its head. 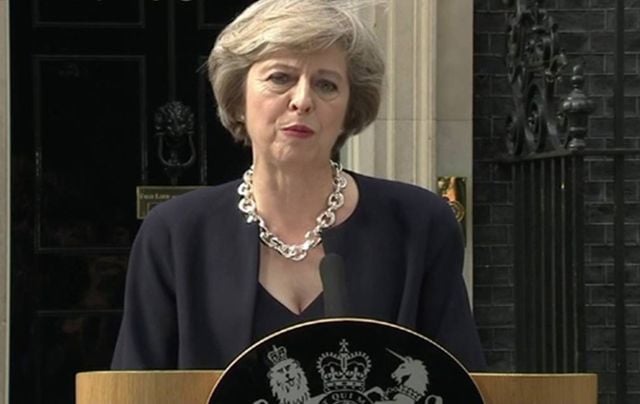 Conservative leader Theresa May addresses the press outside 10 Downing Street.

The outcome of last week’s British election followed the pattern of recent results in France and the United States where conventional wisdom was turned utterly on its head. Prime Minister Theresa May supposedly had an unassailable lead heading into the count, and as recently as last month in local elections the opposition Labour Party had polled all of 28 percent.

However, there is something Clintonesque about May, the belief that pointing out the faults of her opponent rather than focusing on her own policies would be enough to get across the line. This proved  fatal to Clinton and almost to May and could yet do so. Younger generations these days and many older generations too demand more than the stale attack dog policies and meaningless verbiage that campaigns spit out.

Justin Trudeau in Canada, Emmanuel Macron in France and Donald Trump in the United States all ran populist campaigns that embraced deep change, though in each case the type of change envisaged differed greatly. Jeremy Corbyn, head of the British Labour Party, was the agent of change in this British election.  He nearly pulled off the upset of the century in British politics. He ran on a very effective slogan – “for the many, not the few” -- a startling contrast to Hillary Clinton’s inane “I’m with her.”

Corbyn also addressed the core demands of the younger generation -- for so long alienated from British politics -- such as student loan forgiveness and funding the iconic National Health Service. Appealing to idealism of the young can be a very flawed strategy as they rarely vote in proportion to their strength, but on this occasion the Corbyn message broke through. The cynical pollsters with the exception of YouGov and a few minor pollsters were off by up to 13 points. What it means for the future may well be a better type of politics where the old attack dog policies are replaced by real discussion and initiative rather than tabloid name calling.

“Once again, well-informed people, including British politicians, are surprised by an election result because they put too much trust in traditional polls. It's time to get smarter about assessing voter preferences,” an article on Bloomberg View correctly pointed out.

“On the eve of Thursday's election, U.K. newspapers and many outside observers expected a Conservative Party victory. Even a 100-seat majority in the 650-seat parliament was still being discussed. That's because both polls and prediction markets signaled such an outcome.” Twice now in two years the Tory Party in Britain has got it badly wrong, first with David Cameron calling the Brexit vote and now May going for a snap election to solidify her majority, only to see the opposite happen. There is a lesson there for all parties in democracies. Thanks to social media, getting a message out is no longer the sole entitlement of the moneyed and tabloid classes.

The great equalization has begun in politics everywhere and the old certainties are gone. Just ask the U.K. and U.S. pollsters.

Read more: Why the Tory Party love-in with DUP will end in tears