"When not one, not two, but three spiritual leaders of America’s largest Catholic community congregated in, of all places, Naples." 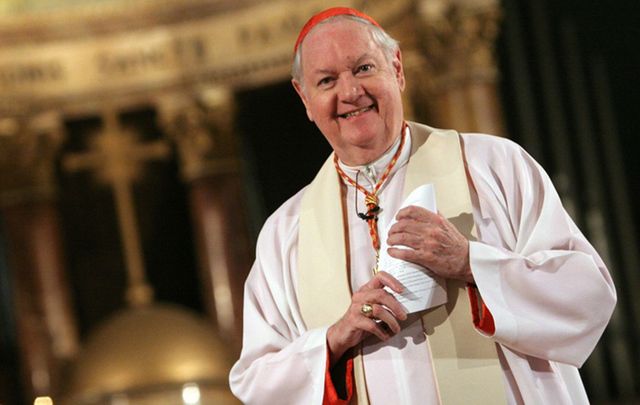 We live in a rare time when two popes can technically be photographed, or seen walking, together.

Pope Benedict XVI, of course, retired for health reasons, breaking the long-standing tradition of popes hanging on right to the very end.  For centuries a new pope was not named until the old pope met his proverbial maker.  The best estimates suggest that this is the first time two popes can appear together in roughly 600 years.

But last week’s Irish American festivities at New York’s Old St. Patrick’s Cathedral brought to mind a similarly quirky occasion when not one, not two, but three spiritual leaders of America’s largest Catholic community congregated in, of all places, Naples, Italy.

On May 13, New York’s current archbishop, Timothy Cardinal Dolan, presided over a Mass at Old St. Patrick’s Cathedral at Prince and Mulberry streets in Manhattan.  The occasion was the reinterment of the remains of John Curry, an Irish immigrant who spent most of his life living and working quite anonymously in New York, before dying in 1943, after being cared for by the nuns of the Little Sisters of the Poor.

When he was a five year-old boy living in Mayo, however, Curry was one of a handful of witnesses to a holy vision that has since transformed Knock into a global pilgrimage site.

In August of 1879, about 15 locals witnessed an apparition consisting of three figures -- the Virgin Mary, as well as St. Joseph and St. John the Evangelist.  They also reported seeing a cross and a lamb upon a plain white alter. John Curry was so young and small he had to be hoisted up by an adult to see the vision over a wall.

Dolan described Curry as an “immigrant who really only distinguished himself by his simplicity, his humility, his kindness and his piety.”

It was Dolan’s predecessor, Edward Cardinal Egan, who once wrote about the unlikely meeting of three New York Irish Catholic leaders in Italy -- a different kind of trinity, if you will.  The story is expanded upon in an excellent recent book entitled The Sons of Saint Patrick:  A History of the Archbishops of New York from Dagger John to Timmytown by George J. Marlin and Brad Miner.

It all begins way back in 1808 when Kilbegnet, Co. Galway, native Richard Luke Concanen was tabbed by Pope Pius VII to run the brand new Diocese (not yet even Archdiocese) of New York.  Trouble is, the era’s wars between France and Britain made ocean travel difficult.

Concanen attempted to sail from Italy to New York but was unable to. At one point, Concanen was even detained by the French since, as an Irishman, he was technically a British subject.  Concanen tried to get New York’s Catholic affairs up and running via the mail, but he died in 1810.

Though he never set foot on U.S. soil, Concanen was New York’s first Catholic spiritual leader, not to mention the first in a long line of Irishmen who would hold that post.  And yet, few had ever heard of him, and he was “buried in an unmarked grave,” as Marlin and Miner write.

In 1978, Terence Cardinal Cooke, whose own parents were from Co. Galway, and who served as archbishop from 1968 to 1983, traveled to Naples to pay respects to Concanen and dedicate a plaque at his gravesite.

It just so happens that a U.S. Navy ship was anchored in the Naples harbor.  Fittingly, Cooke met up with the Catholic chaplain serving on the vessel.  Cooke also decided to invite the chaplain the ceremony honoring New York’s first Catholic leader.

For one sacred moment, Cooke, the chaplain, and the rest of the visitors from America knelt in prayer at the final resting place of the Irishman who served the first wave of Irish Catholic immigrants to the New World, without ever setting foot in America.

Five years later, that Navy chaplain would replace Cardinal Cooke as Archbishop of New York, serving for 15 years.  His name was John O’Connor.