And it wouldn't be surprising if there' be another rising.  Said the man from the Daily Mail.” 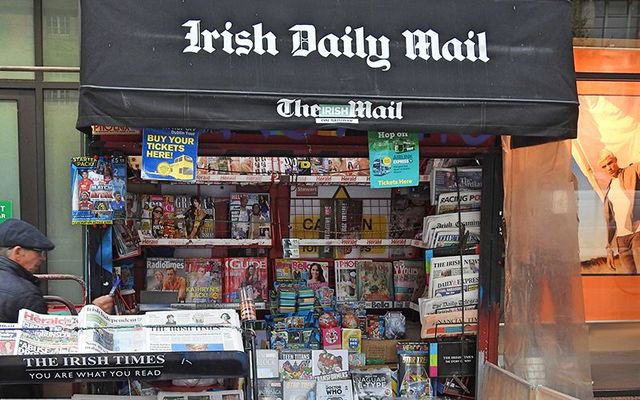 "Said the man from the Daily Mail.” Getty

"EVERY bird upon my word is singing treble - I'm a rebel.

Every hen is laying hand-grenades over there Sir, I declare Sir.

And every cock in the farmyard crows in triumph for the Gael.

And it wouldn't be surprising if there' be another rising.

Said the man from the Daily Mail.”

The Daily Mail, of course, is the most antagonistic of all the newspapers in Britain to the Irish and was so during 1916 Rising and its aftermath.  It also deserves the odium of the Irish given its viciously anti-Irish reputation during The Troubles.

The Irish Independent called the paper “virulently anti-Irish and noted,

“For decades, it has published some of the most virulently anti-Irish journalism in Britain and in recent years sneeringly described this country as a land based on the pig and the potato.”

All that British bollocks appeared to have faded away after The Troubles, and the publishers even started an Irish edition of the Mail which did raise a few eyebrows.

All well and good, but then Brexit came barreling down the information highway.

The Mail did not take kindly to the pig and potato Irish seeking to secure the Good Friday Agreement that promised no hard border.

Paddy was acting up again, and it was high time The Man From the Daily Mail was once again dispatched.

This man even had a name, Nick North, and he was soon up to scratch, matching anything his predecessors had managed.

Here is his big scoop: “Elderly former IRA terrorists are being brought out of 'retirement' to exploit tensions in Northern Ireland over Brexit, The Mail on Sunday has learned.

What is this? The charge of the Zimmer frame brigade?  Elderly IRA men leaving their old folks homes and taking up weapons because of Brexit?

None of the Dad's Army terrorists were actually interviewed alas. Instead, an unknown IRA source gave the information to nonplussed Nick who printed it with great abandon.

The secret source told Nick, “They gave up violence after the 1998 Good Friday Agreement, which ended decades of sectarian conflict. But the possibility of a hard border between Northern Ireland and the Republic has tempted them back.

“These former fighters may be getting on a bit, but they are all seasoned, experienced men who still have a lot to offer the movement and can train, advise, guide and boost morale.”

As I was reading this I realized it was only a matter of time before the IRA First Battalion West Belfast Wheelchair Brigade becomes a reality.  Dastardly stuff, planting bombs inside Depends packages in supermarkets and escaping on wheelchairs no doubt.

Then there’s the easy infiltration of retirement homes to recruit and add a continuous stream of aged volunteers for this new IRA.

To counter the threat of the Zimmer frame IRA, the Daily Mail repeated a Times of London canard that 700 MI5 officers were on their way to Northern Ireland to foil the old farts.

That would be a ratio of about, oh, seven MI5 men or women to every terrorist, but Nick had no notion of discussing any such oddities. The Pensioned Provos are a grave threat.

The Man from the Daily Mail is back alright, as the 1920 song notes:

“Now the whole place is seething with sedition.

It's Sinn Fein through and through.

All the peelers they are joining local units.

And the password's Sinn Fein too.

Every doggie wears a tri-colored ribbon tied firmly to its tail.

And it wouldn't be surprising, if there'd be another rising,

said the man from the Daily Mail.”