“The Foggy Dew”, one of the best-known ballads commemorating the Easter Rising, was written in 1919. You may not know that the author was a young priest from County Antrim. 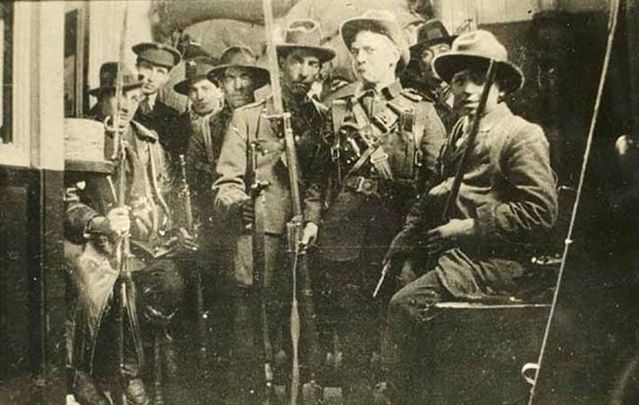 “The Foggy Dew”, one of the best-known ballads commemorating the Easter Rising, was written in 1919. You may not know that the author was a young priest from County Antrim.

Charles O'Neill was born September 20, 1887, in the village of Portglenone, west of Ballymena. O'Neill took the path to priesthood and was ordained in July 1912.

In 1919, the then 32-year-old priest found himself in the midst of history when he attended the first meeting of Dáil Eireann in Dublin's Mansion House, on January 21.

During the first sitting of the Dáil, the rollcall of members of parliament was made by Ceann Comhairle (Chairperson)Cathal Brugha and he declared 34 members absent as "Faoi ghlas ag na gaill" ( “Locked up by the foreigners!”) While 26 unionist members were absent by their own choice.

This had an emotional effect on O'Neill who after his day in the Mansion House went back home and penned a poem lamenting those who lost their lives fighting for freedom and he named it “The Foggy Dew” (see full poem below).

O'Neill's poem was put to the melody of the old Irish lament the “Banks of the Mourlough Side”. When it was first published late in 1919 O'Neill did not put his own name to his own work, instead, he used the pseudonym Iascar. During those dangerous days in Ireland’ O'Neill wanted to protect his identity from unwanted attention.

“The Foggy Dew” chronicles the emotion and expression of Easter 1916 but it is also an unusual rebel song as it mentions that other Irish soldier, the one who wore a British uniform and fought far from their native land.

World War One saw up to 210,000 Irishmen enlist in the British army to fight in places O'Neill mentions in his ballad, like Suvla Bay and Sud el Bar.

“The Foggy Dew” suggests it was far better to die neath an Irish sky than fight in far off lands for the crown. O'Neill questions those who went off to fight for the king rather than fight for the Republic like those in the GPO or those from the plains of Royal Meath.

“The Foggy Dew” decrees that those who fought and died in WWI will end up in lonely graves by Suvlas waves while those who died by Padraig Pearse's side, in the 1916 Easter Rising, will have their names remembered and honored.

O'Neill's words proved true because in the years after the foundation of the Irish Free State and up until quite recently, those who did leave these shores to fight in WWI were largely forgotten in favor of those who fell in “The Foggy Dew”.

O'Neill would go on to become parish priest of the County Down village of Kilcoo, in 1941, before moving to neighboring Newcastle, in 1955. O'Neill served as parish priest there until 1959 when he was made canon.

Canon Charles O'Neill died on May 8, 1963, and was buried in the old church cemetery in Newcastle County Down.

O'Neill never made a fortune from his only known published ballad.

In the Belfast Gazette of August 2, 1963, a report detailed how O'Neill left £50 in his will to the St Vincent De Paul in Killcoo and £50 to St Vincent De Paul in Belfast. O'Neill indicated that anything left in his estate be sold and proceeds to pay off the debt of a new church built in Newcastle.

Today the Foggy Dew still holds a popular place in the Irish ballad scene and 100 years after its publication it is a song that still captures a fighting spirit.

Here is the full poem of “The Foggy Dew” by Canon Charles O'Neill:

As down the glen one Easter morn to a

There armed lines of marching men in

squadrons passed me by

No fife did hum nor battle drum did

But the Angelus bell o’er the Liffey swell

rang out through the foggy dew

they hung out the f lag of war

than at Suvla or Sedd El Bahr

And from the plains of Royal Meath

While Britannia’s Huns, with their

long-range guns sailed in through the

But their lonely graves are by Suvla’s

waves or the shore of the Great North Sea

Oh, had they died by Pearse’s side or

Their names we will keep where the

Fenians sleep ’neath the shroud of the

But the bravest fell, and the requiem bell

For those who died that Eastertide in

the springing of the year

And the world did gaze, in deep amaze,

at those fearless men, but few

Who bore the fight that freedom’s light

Ah, back through the glen I rode again

and my heart with grief was sore

For I parted then with valiant men

whom I never shall see more

But to and fro in my dreams I go and

I’d kneel and pray for you,

When you fell in the foggy dew.

Do you have a favorite Irish ballad? Let us know in the comments section below.