British government issued a 28-page position paper on the Northern Ireland border reads like contradictory pie in the sky stuff... cause it is. 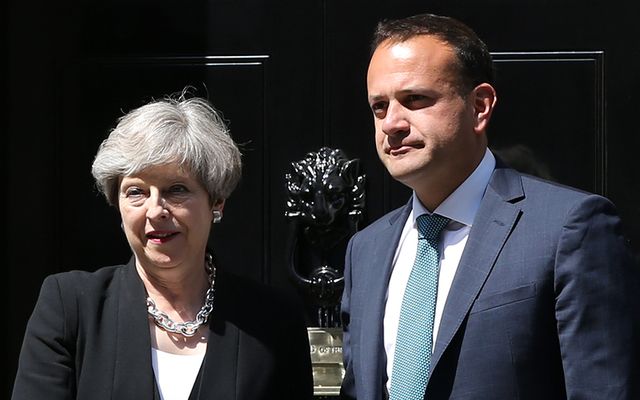 British government issued a 28-page position paper on the Northern Ireland border reads like contradictory pie in the sky stuff... cause it is

Last week the British government issued a 28-page position paper giving its views on how the Irish border might operate after Brexit.  It caused some surprise here since it seemed to be very much in line with what the Irish government would like to see, which is a continuation of the present arrangement with no physical border whatsoever and complete freedom of movement for people and goods between north and south.

What the British appeared to be suggesting was that even though the Irish Republic will remain in the EU, and the U.K. (including the North) will be out, there could still be free travel and trade between Ireland north and south; at the same time the mainland U.K. would be able to control immigration and make its own trade deals with the rest of the world.  If you think that sounds like contradictory pie in the sky you would be right.

Even some of the British media sounded warnings, claiming that people from all over the EU who have the right to enter Ireland (since we are part of the EU) would be able to move freely into the North and then on to mainland Britain.  Ireland would be "an open back door" into the U.K. mainland.

Whatever about the misgivings of the more excitable parts of the British press about the movement of people, the British position paper on the border is even more problematic for the other 27 EU countries on trade.

As far as they are concerned, when the U.K. (including the North) leaves the EU and its Single Market and Customs Union, that's it.  They're out.  And there will have to be some kind of border in Ireland which will enforce that.

From the EU perspective, various malign scenarios on trade seem possible if there is no Irish border after Brexit.  If the U.K. does its much vaunted trade deals with the rest of the world after Brexit, what would stop some of those imported goods being sent from the mainland U.K. on the ferry to Northern Ireland, then down to the south of Ireland (which gets them into the EU) and from there onwards to the mainland EU, bypassing all EU controls and tariffs.

What's to stop container loads of hormone-fed South American beef or chlorine washed American chicken which are imported into the U.K. being moved via Ireland into the rest of the EU and sold to German or French consumers?

And it's not just farm produce.  What about Indian steel or Asian pharmaceuticals or Chinese computer parts or a myriad of global products too numerous to mention? How would EU rules, standards, quotas and tariffs be applied if a borderless Ireland provides a gateway from the UK into Europe?  In some cases this may be dismissed as alarmist, but the general problem is real nonetheless.

Even on local trade within Ireland, the British position paper seems less than convincing.  It suggests that the 80 percent of trade between north and south which is generated by smaller companies could continue to be tariff free.  The rest of the trade, generated by bigger companies, some of them multinationals, would pay tariffs on an honor system based on their own records.  So there would be no need for a hard border, or even for a soft border with cameras or other tech devices.

The British piously say they agree with the Irish government that any signs of a visible border would be undesirable.  And that's all very attractive.

But it means everyone, including big multi-national companies, would have to be scrupulously honest all of the time.  Call me old and cynical, but that's not the real world.

Despite all this, it is encouraging that the British are at last producing proposals on paper because up to now all we have had was vague statements by ministers who often contradicted each other.  That said, this British position paper on the border is a list of guiding principles rather than detailed rules for what form it would take after Brexit.  And the devil will certainly be in the detail on this because it's unbelievably complicated.

The simple realty is that if the U.K. is out of the Customs Union, there has to be a hard border between Northern Ireland and the Irish Republic. The British are well aware of this, and a lot of what they had in their position paper on the border last week was simply wishful thinking because they know it can't work.  Or else it was cynically clever politics.

There were accusations that the British had revealed their real objective in a second position paper also published last week which was about their future relationship with the Customs Union.

In that they again suggested that they could leave the EU Single Market and Customs Union but still arrange a trading relationship with the EU that would be virtually the same as that which now exists between the U.K. and mainland Europe.  They want to keep all the advantages of being a member of the EU Single Market and Customs Union, even though they will be outside and busy making their own trade and customs deals with the rest of the world.

Ireland is preparing for a 30% fall in exports to the UK and a GDP fall by -3% in the decade after Brexit.
This is grim. ☹️

An article talking about how 45% of Enterprise Ireland construction firms have reduced exposure to UK https://t.co/LoeZIyFTby #Brexit

That is simply not on and it's never going to happen. They know that but they are still aiming to force it through.  And to do so they are using the Irish problem as a bargaining chip.

Their position paper on the border last week was divided into A and B sections.  The B section went through the ideas outlined above and the complex difficulties that would arise and how they might be addressed.

But the A section of the paper made the following simple statement: Proposals for a new customs partnership with the EU -- in which the U.K. would be free to negotiate trade deals with the rest of the world while maintaining free trade with the EU -- would avoid the need for any border.

Like we said, despite all the guff in the papers published last week, the British seem to be willing to use the border as a bargaining chip.

The British want a new customs arrangement with the EU that enables virtually free trade between the U.K. and EU but also allows it to negotiate new trade deals with the rest of the world.  That's called

trying to have your cake and eat it -- and Ireland is on the menu.

What all this means is that Perfidious Albion is at it again.  Their position paper last week on the border makes it clear that they know the difficulties any kind of border in Ireland would cause would be immense.

And their attempts in the paper to gloss over this and minimize it are most unconvincing.  What they really want is access to the Customs Union without having to be part of it.

The suspicion has to be that what the publication of the papers last week was really about was an attempt to give the impression that the U.K. is totally against any kind of hard border in Ireland after Brexit.  So if the inevitable happens and the EU says no to what the U.K. wants on access to the Customs Union and a hard border becomes a realty, we will all blame the EU, not the U.K.

It's called getting your retaliation in first.