If St. Brigid and St. Patrick had an argument

"To every corner of what they call the diaspora and will you find even the smallest and most nominal St. Bridget's Day Parade? Not at all." 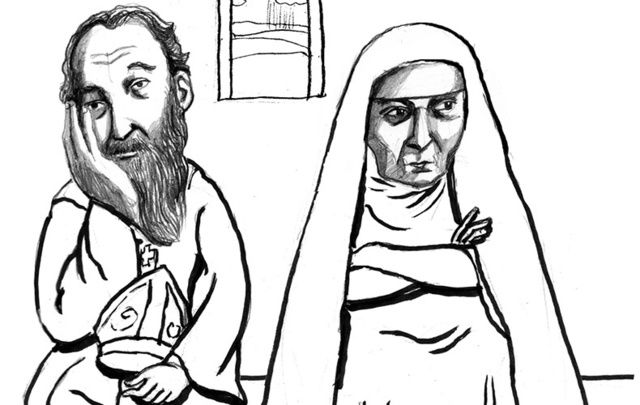 You see, when I went a-wandering through the boreens running in a maze through the western region of my imagination the other night, where did I not find myself but in a green room in paradise itself with two quite animated Irish saints sitting in the warmest corner.

Through the celestial window behind the male saint's grizzled head there was a clear picture of Ireland where, of course, scattered showers were fighting a losing battle with shafts of golden sunshine. Quite an impressive sight that was too.

I could have watched it forever, but I was distracted by the fact that the two saints were complaining quite bitterly about their circumstances. By this stage, I had worked out that the one with the Welsh accent was St. Patrick, and the strongly-built matron who was the angriest of the two was St. Bridget.

It is more than a little frightening to discover there is discontent even in heaven, is it not? Anyway, this is my accurate communiqué from my eavesdropping experience.

Bridget's voice climbed up into the higher registers which ladies use in times of ire as she said bitterly that February is traditionally her month in Ireland but, apart from the construction of a few hundred rush crosses in all of Ireland, there was no other real recognition of her love and compassion towards the Irish since time immemorial. That angered her greatly.

Says she, "Go right around the world, to every corner of what they call the diaspora and will you find even the smallest and most nominal St. Bridget's Day Parade? Not at all, not even a half-dozen women marching down a side street in my honor.

"That hurts me, Patrick, when I think of how the whole world quakes under the millions of marching feet on the 17th of March year after year. That is discrimination against women no matter what way you look at it, and I am very cross, so I am!"

And maybe I should not report this, but she took a deep, quick swig out of a glass on the table before her. That glass contained a clear crystal liquid, which I am certain was not water. There was a similar glass in front of Patrick and his was almost empty.

Bridget continued, "There is far more than that to complain about. Every second baby boy that is born to the Irish all over the world there below is baptized Patrick or Padraig or some variant of your name, Patrick, and that's the way it has always been and fair play to you for that, and there have been Patricks in Ireland and elsewhere down the years who have greatly honored your name. Right.

"But what is the situation regarding little infant girls being named in my honor? Dire! Deadly! Mothers will go to the ends of the earth to call their daughters by any name but mine. There were only 117 little girls baptized as Bridget in the world last year and barely a hundred the year before that. And do you know why, Patrick?"

And she took another strong swig from the glass, "'Tis because in the past in Ireland, especially on the small farms, the women called Bridget, God love them, were worked to the bone all their lives. They were expected to bring eight or nine children into the world in between feeding calves and turkeys and milking cows out in open fields under heavy rain.

"Usually they were not called my name at all, but often they were called Biddy, a name synonymous with low status and slavery. There was even cheap wine that time that was known as Red Biddy, but well dare any poor Bridget go into a public house in those years to even have a glass of sherry. She'd be the scandal of the whole parish. Meanwhile, her Patrick was downing pints and singing ballads within every second night of the week."

And she emptied the glass as she said that was the reason the mothers of Ireland and the diaspora today turned their backs on her and called their girls names like Tara and Colleen and other ones like that.

In fairness to Patrick, I observed him listening intently and even occasionally nodding agreement. I was surprised, however, at what he said when he spoke with his deeply singsong Welsh accent.

"I know that's a fact, Bridget, and I empathize because you see, I am not properly appreciated and honored either. All those parades with my name attached to them are often led and organized by folk I would not have much time for," he said.

"And often led by marching bands that sound as if they had come straight out of the other place beneath our feet that we won't talk about."

"But what hurts me is that my mightiest achievement for the Irish is never ever mentioned. Never mind those bloody snakes and myths like that. The truth is that the Irish would not exist as a race at all today only for my greatest work on their behalf."

"If you were to check the records worldwide, you see, Bridget, you would find that a huge percentage of the modern Irish, at home or abroad, are born either in very late December or in the first fortnight of January. Why is that? That is because the atmosphere I have deliberately created around the parades and other events of the 17th of March stimulates and encourages activity in the marriage beds which leads to the badly needed baby boom the following December and January."

"The tradition of drowning the shamrock, and all associated with that, should more properly be called the preservation of the shamrock. Without that consequent baby boom in January, Bridget, the Irish, as a race, could easily have disappeared after the Famine years."

He raised his glass, "Here's to the millions of Irish I call the Januarians!"

Somebody rang my doorbell and I was snatched back to Co. Clare before I heard any more. However, I thought it was worth passing on this experience to you all. No matter what name you bear!