"Right-wing Catholic Church acolytes... another insensitive attempt to defend the indefensible, the horrific treatment of babies and children by the Irish church." 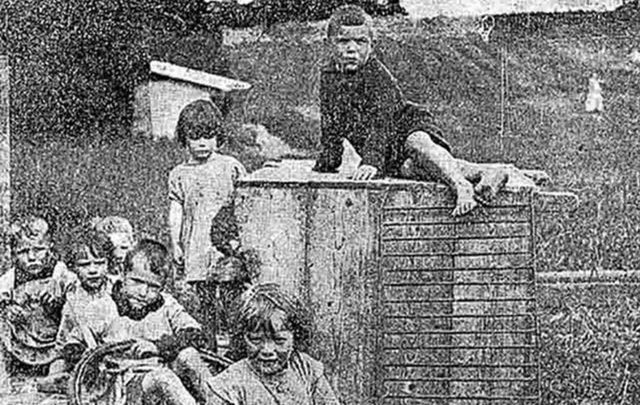 Children photographed at the Tuam mother and babies home in 1924. Connacht Tribune, 1924

The University of Notre Dame had a bad weekend, the footballers losing heavily to Miami and dropping out of the BCS series.

In a completely unrelated event, the university hosted a talk by Irish journalist John Waters, a controversial figure who has called the Tuam babies controversy a hoax.

Waters has a reputation for being outspoken on issues such as gay marriage and gay adoption, both developments he opposed.

The fact that the event was hosted by the Notre Dame Values and Ethics group made Waters’ comments casting doubt on the Tuam babies story and the horrific events that happened there, all the more gratuitous.

One more insult from right-wing Catholic Church acolytes may not have moved people’s opinions on what happened at Tuam between 1925 and 1961, but it was yet another insensitive attempt to defend the indefensible, the horrific treatment of babies and children by the Irish church.

Irish Diaspora Minister Ciaran Cannon was quick to note the insensitivity of going after defenseless children, most long since dead.

“This shamefully insensitive re-interpretation of the facts attempts to discount the very real and all too painful experiences of survivors and the details contained in the Expert Technical report (which found that close to 80 children had been buried in unmarked graves). I'm deeply disappointed that a seat of learning as respected as the University of Notre Dame would host such an event,” said Cannon.

"The reality is that the story of the Tuam Mother and Baby Home brings us face-to-face with a major aspect of Ireland’s sometimes murky social past in which children were victimized by a society that found it convenient to overlook their existence.”

A man pays his respect, at a memorial on the grounds of the Tuam mass grave.

Despite Cannon’s words, some will never admit the culpability of the authorities at the time.

Others like Waters will attack the messengers who reported on the dreadful happenings as if that were the only aspect that was important.

The fact that there was no one there to defend the children at Notre Dame speaks volumes about ethics. Perhaps we should not be surprised.  Some years ago the same group sought to ban Barack Obama from speaking on campus because of his abortion stance.

So closing your ears to abused children and presidents gives a great insight into the actual ethics and values the group at Notre Dame actually encapsulates. And all in the name of hiding the truth as Cannon found.

“The death rate of babies at the Tuam home was almost double the rate of other homes around the country. Figures from National Archives show that 31.6% of babies under the age of one in Tuam died over the course of one year alone. In addition, no one can question the fact that the bodies of hundreds of these babies were simply thrown into a concrete bunker rather than being given a respectful burial."

Nuns caring for young children at a mother and babies home.

There are those who will not let their little spirits rest even now. Waters and his type oppose every modernizing instinct in Ireland. But they are too late to hide the truth and the march to progress.

The truth has been told about the Tuam babies, same-sex couples can marry and adopt in Ireland. Those who seek to turn back the clock might as well be King Canute stopping the tide. Weasel words will never change.