“St Patrick’s had a huge mortality rate. It’s just as likely that there are graves on site at St Patrick’s. One woman described the situation where the nuns did everything to create an environment where babies did not survive – through neglect." 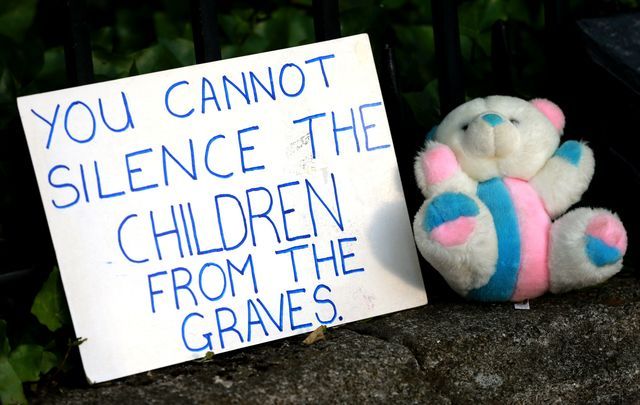 A sign posted in front of Ireland's government building in protest of the Tuam babies mass grave - "You cannot silence the children from the graves." RollingNews

The survivors of St. Patrick’s Mother and Baby home, in Cabra, Dublin, are calling for the Irish Government to excavate the site, in a similar way to the mass grave at Tuam

Survivors have long warned that Tuam is likely only the tip of the iceberg and a group who spent time at St Patrick’s as infants say the time is now right to get to the bottom of what happened there.

Smyllum Park, a home in Scotland run by the same order of nuns, is under investigation after claims were made that up to 400 children lie buried on its former grounds.

Survivors of Smyllum Park and St. Patrick’s are in contact with each other and regularly exchange advice and moral support.

A protest was recently held outside the gates of the former home and Clodagh Malone, a survivor of the home, told Dublin Live: “There are babies buried in Glasnevin Cemetery but we do think there are children buried on the grounds here.

"We're calling on the government to launch an investigation into the site.

"We're hoping in February 2018 that we have the results of the Commission of Inquiry, and we're hoping at that stage for redress, apology and perhaps counseling for our long-term survivors.

"We're also looking for a memorial here at St. Patrick's – there is nothing here to commemorate what happened."

Earlier this year another survivor of St Patrick’s, Ronan James O’Halloran, told IrishCentral he is certain an excavation on the former home’s site would reveal a mass grave.

“No doubt about it.

“St Patrick’s had a huge mortality rate. It’s just as likely that there are graves on site at St Patrick’s. One woman described the situation where the nuns did everything to create an environment where babies did not survive – through neglect.

Read more: After 44 years "I am still seeking my mother" says Mother and Baby home survivor

“The women did not spend time with their children. After they gave birth they were put to work, scrubbing toilets or floors and then they would have a ten minute break to feed the child and then they’d be sent back to work. So the children were neglected. They were in no way nurtured.”

“They [the mothers] would go into labor, she would be left in almost darkness on her own, a priest would intermittently come in as she was screaming to tell her that this was her penance for having sex outside of marriage.”