The day a halo appeared above my head in church

"I was once so innocently angelic that an actual halo was seen by all in our Arney Chapel over my head on a Good Friday afternoon." 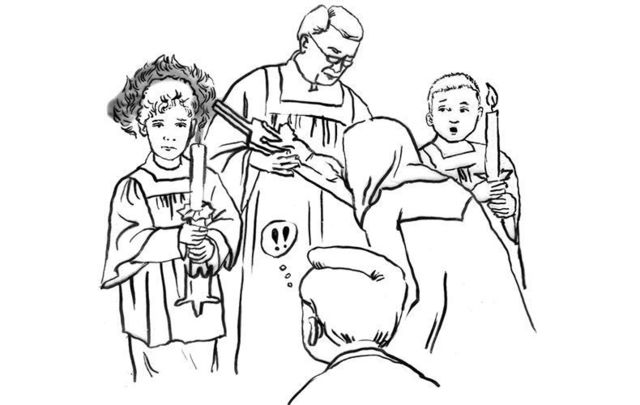 I was once angelic! Behold the tale of Cormac's halo. Caty Bartholomew

I had mighty craic locally last week relating the absolutely true story of how I was once so innocently angelic that an actual halo was seen by all in our Arney Chapel over my head on a Good Friday afternoon.

Little wonder that the entire congregation gasped with wonder at the spiritual sight.  You probably would too even today. Upon reflection, I decided that I should share the yarn with you lot so that ye will read my words with even more respect in future.

Read More: The beauty of peace and quiet

It is true that the apparition of the halo was brief. It is equally true, to my sorrow, that it never has happened since to date.

But, above all, it is the truth that I was an absolutely angelic altar boy in my surplice and soutane standing beside the priest inside the Arney altar rails on that Good Friday afternoon of great devotion and veneration. I was 10 years old then, you see, had bright green eyes, a ready and friendly smile, and a fine head of coal-black curls.

Indeed one of my only problems at the time around Arney was the frequency with which large women would pick me up and hug me and coo over me and press my face against what I now know were whalebone corsets. Being angelic, naturally, I smiled and put up with that without any protest at all. That is probably how one lays down the foundations for a halo to appear over your head.

Some of you who were born over here will recall the solemnity of the Good Friday gatherings in little country chapels like ours back then. At the climax of the event, the people would file up reverently to kiss the crucifix held by the priest. He would wipe the crucifix with a cloth between each kiss and was flanked by two altar boys bearing brass candlesticks.

I was the one on his right-hand side on the day. Standing guard on the other side was my neighbor, now Father Brian D'Arcy, one of Ireland's best-known priests.

But it was not over Brian's head that the halo appeared. It was over mine. I'm still very proud of that.

It is relevant that the ceremonies in the chapel were so central to our Catholic community that my dear mother made certain that I was well washed and cleaned up for the afternoon.  And she had freshly laundered my small surplice and soutane. And she put a dash of brilliantine atop my curls to make them glisten ever more brightly before heading out to the chapel.

Read More: Holy Week and memories of Easter as a child in Ireland

There were no selfies in that era, of course, only Box Brownies, but I recall she told me I was looking really well before I headed into the sacristy to get robed and ready for the ceremony.  And the chapel was packed to the doors when we began.

Incidentally, things and arrangements were very different then to now. The women’s side was to the left of the single-aisle with the men occupying the brown benches on the other side. You knew when there were strangers in the parish if they went into the wrong benches by accident.

The line of devotees coming up in the queue to kiss the crucifix moved very slowly too, and maybe there was a social and economic context to that too. The men, overwhelmingly farmers, were getting stiff and slow on their legs, even in their forties, from the hard manual labor on small boggy farms.

Their womenfolk, in that ascetic time when they were ordered by their church authorities to increase and multiply, were frequently the mothers of up to 10 and 12 sons and daughters, and that slowed them down in the queue as well.  Anyway, it was a slow process.

And just like that, the entire congregation uttered a loud gasp as, suddenly, the halo appeared over my angelic young head.  I now know, by way of explanation, that what happened was that I had closed my eyes for a second, my head had dropped down slightly over the candle flame and the brilliantine which my dear mother had applied to my curls was, apparently, as highly flammable as petroleum

So my hair went quickly afire and that fire produced a perfectly circular blue class of a halo over my head. And what followed was stunning in more ways than one.

A neighbor man in the queue, a man bearing the locally common surname Love, rushed forward and began beating me around the head with the tweed cap he had in his hands.  He put out the flames before they did me any harm at all and the halo disappeared too. Afterward I was very disappointed that I was about the only one in the chapel who had not seen it.

So there it is. A final truth, I suppose, is that I was saved by Love that Good Friday from joining my fellow angels high above Arney Chapel in another dimension long before my time!

Read More: Why Easter is such an important holiday to the Irish