The beauty of peace and quiet

Cead Mile Failte to you all from this coast of the Wild Atlantic Way in Clare during a historic interlude. 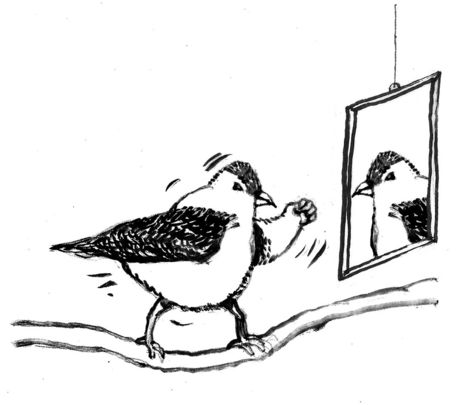 "A bold little crazy goldfinch in front of an outside mirror." Caty Bartholomew

Cead Mile Failte to you all from this coast of the Wild Atlantic Way in Clare during a historic interlude in which ye will agree, I think, that all has changed utterly since we were last in touch and, frankly, viewed from a certain Celtic perspective, a new beauty is born.

I’ve deliberately excised the “terrible” adjective which usually occurs in that sentence because, certainly in Clare and Tipperary this week, and surely inside the roadeens of my own aged zany head, there is much to be celebrated just now.

There is total peace and quiet and commonality here in Killaloe and the sister town across the Shannon, the other Ballina, and the weather has improved and quieted at the time of writing.  I’d quite forgotten just how healing peacefulness can be for most of us over here.

This morning I happily switched off the little battery radio we were depending upon last week and allowed the peace and tranquility to work its real magic.

All the other media sources are blanked out too, deliberately.  The pubs and restaurants are now shuttered by government edict to halt this coronavirus spread, and it only adds taste and relish to my kitchen-bred Irish whiskey hot toddy fortified with lemon and honey.

My lovely wife Annet is at work in Limerick for the day and I’m alone with a serene old dog called Anika, sleeping under the table, and a cat named Belle also sleeping on a couch. There are no callers to the Killaloe doorstep, the phone is quiet. Peace is precious indeed.

No traffic at all on the local roads, the community college next door closed, again by anti-corona edict, until at least the end of the month, probably longer than that according to the experts and, if this is what voluntary quarantine feels like I have no complaints at all.

I am aware there are increasing restrictions on American communities currently, especially bearing down on senior citizens such as myself, seen to be most at risk from the virus, but I reckon I’m not alone in my views as peace comes dropping slowly and serenely over Lough Derg and the Shannon.

The global commercial implications and costs are clearly huge everywhere, especially for tourism economies like ours, and the stock markets are taking a record drubbing by the hour.

Let’s not go anywhere near that debate. It involves sectors such as airlines and hospitality sectors well able to look after themselves.  Instead, let’s have a bit of craic, a mighty ointment for the soul.

I was talking on the phone to a merry neighbor a while ago, for example, and he said that he had a major upset making his way home from the pub before the closedown last weekend. He attempted to give the recommended elbow bump greeting to his friend but things went awry and instead, he struck the poor man with his elbow on the nose and knocked him almost unconscious.

He also washed his hands, as recommended, so frequently and thoroughly with soapy hot water that his wedding ring slipped from his finger and is still missing.

“I’m in deep trouble with the wife over that,” says he. “She suspects I went astray on her before the pubs closed down!”

We don’t realize, do we, how high are the noise levels against which we have been living our daily lives in normal times before this emergency emerged. I’m certain, no matter where you are reading this piece, it is your reality too, probably on an even more magnified scale than ours.

That’s why this peaceful interlude along my slice of the Mild Atlantic Way (today!) is so enriching. I’m serenely seeing events in our little back garden I never really had the time to observe before.

Don’t think I told ye previously about the antics of a bold little crazy goldfinch in front of an outside mirror mounted at the end of one of Annet’s garden plots.  The little guy spots his reflection in the mirror and ferociously attacks it, time and again, believing he is fighting off a rival for the lady finch in the willows overhead.

It is, after all, the beginning of the mating season for our feathered fraternity.  In normal times before now, with the school buzzing with activity on the other side of the wall, I’d not have time or peace enough to observe and enjoy that.

This species of quiet peace and relative isolation behind my own front door in Killaloe, with even the doorbell silent for hours on end, also makes me as somnolent and relaxed as Anika and Belle the cat.  So I’m going to call it quits for the day, construct another hot toddy, reassure Jim Lowney and the other two winners of our recent song competition here in the Irish Voice lately that I will keep my word and pass on to them the hauntingly peaceful air to wrap around their own lovely yarns before the week is out.

And that is all for now. Keep yourselves safe wherever you are until we meet again.  Slainte!

Read more: I woke up on St Patrick’s morning with a hangover even though I didn't drink