There was an Irish wake in a rainy New York City on Monday night, but the body was very much alive and those who turned out to pay tribute had a great time sharing stories and laughs. 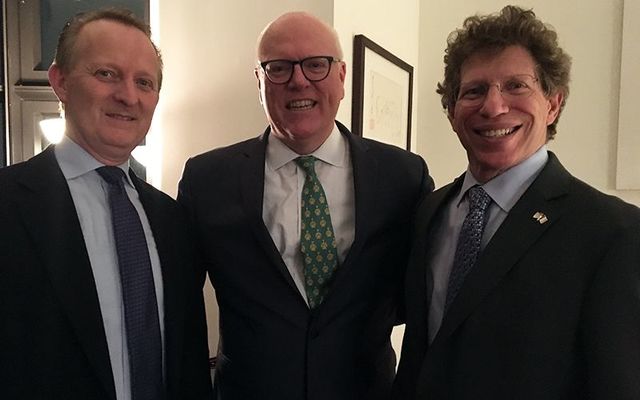 There was an Irish wake in a rainy New York City on Monday night, but the body was very much alive and those who turned out to pay tribute had a great time sharing stories and laughs.

The guest of honor at the party hosted by Irish Consul General Ciaran Madden at his residence was Queens Congressman Joe Crowley, who will leave the House of Representatives on January 3 after serving for 20 years, suffering defeat to Democratic primary challenger Alexandria Ocasio-Cortez in June.

Madden convened a number of local politicians and Irish community leaders for the tribute to Crowley, a stalwart supporter of all things Irish during his political career which began in the New York State Assembly, where he led the charge to pass a 1996 bill that requires New York State schools to include the Great Irish Famine in the curriculum.

“Your loss is our loss. It’s a huge loss for the community,” Madden said in his remarks.  “My job is to see the world through green-tinted glasses. And Joe, you are a great friend.”

New York City Council Speaker Corey Johnson was blunt when speaking about the end of Crowley’s career in the House: “I am still in denial. I am in major denial. I don’t really know what to say. In this difficult, painful, tumultuous time that we see ourselves in every single day, it’s really important to have honorable, decent people within elected office, and that’s what Joe Crowley is and what he’s always been,” Johnson said.

“It’s not the end for Joe Crowley. It’s the beginning of a new chapter. And it’s not a funeral. He’s not dead! He’s to be celebrated tonight!”

And celebrated he was.  Among those in attendance were City Council Member Daniel Dromm, New York Lieutenant Governor Kathy Hochul and a number of local political operatives, and representatives of most of the major Irish groups.  This year’s New York City St. Patrick’s Day parade grand marshal Loretta Brennan Glucksman was there, as was next year’s, attorney Brian O’Dwyer.

There were plenty of Crowleys in the room too, among them family matriarch Eileen Crowley from Co. Armagh, 85-years young and a robust survivor of cancer of the jaw.

“Everyone thinks I had a hard year, but when you find out you have cancer like my mom, that’s really hard,” Crowley said.

His first cousin Elizabeth Crowley, a former member of the New York City Council from Queens, was also at the party. She lost her seat last year, but Joe promised that they would “both rise again.”

Crowley kept his remarks firmly focused on his passion for all things Irish.  “It’s been an incredible love affair for me. I was meant to do it,” he said.

Being Irish “was instilled in me as a young boy. It was something I was interested in and really wanted to learn more. It’s second nature to me.”

The 56-year-old father of three said he hopes that his Irish political work will be carried on after he’s left the House.

Crowley remembered one of his first public engagements as a teenager – playing guitar in a band with Adrian Flannelly, who was the singer and keyboardist.  Flannelly, the beloved radio host who will celebrate 50 years on the air in 2019, laughed as Crowley recalled the good old days.

And there will be more to come, the Queens stalwart promised.  “This isn’t farewell, this isn’t goodbye,” he said.

“I don’t know what I’m going to do yet. We’ll figure it out.  There’s been a lot of good overtures but nothing yet.”

The night ended with an Irish singsong, Joe strumming his guitar, his mom Eileen and brother Sean handling vocals … and all in the room grateful for the friendship of the forever King of Queens.