Peacemaker George Mitchell on his rough start and his poor, loving Irish family

We talk to U.S. Senator and primary architect of the Good Friday Agreement in Northern Ireland about his memoir. 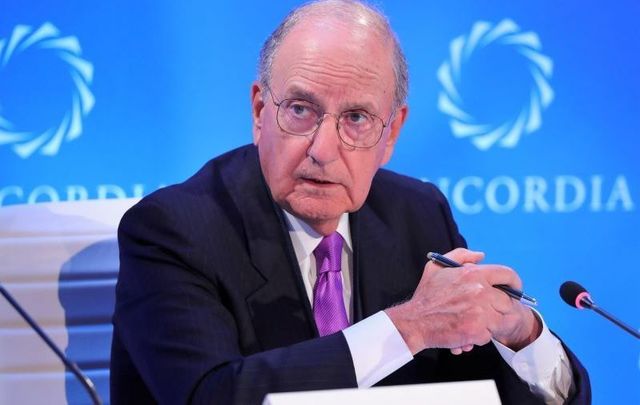 Before he was a U.S. Senator or the primary architect of the 1998 Good Friday Agreement in Northern Ireland, George Mitchell was the fourth of five painfully poor kids, growing up as the son of an Irish American janitor, himself the orphan son of Irish immigrants. Cahir O'Doherty talks to Mitchell about his rough start, his abiding love for his family, and how the two turned him into the tough peacemaker he has become.

We all think we know George Mitchell from the television. There he is leading Ireland's warring political leaders to a transformational peace agreement in 1998, the dashing diplomat and deal maker, born with the political skill to defuse demagogues before they know what hit them, a man admired and trusted by all sides.

But as his new memoir "The Negotiator, Reflections on an American Life" (Simon & Schuster) makes clear, Mitchell, 81, did not just appear fully formed with his blue blazer pressed and his victory speech ready on that night in 1982 when he first became a United States Senator.

In fact, given his painfully hardscrabble background in a working class family in Maine, for a long time it was not at all sure that he would make it out of his hometown, never mind all the way to Washington, D.C.

What saved him was that classically Irish intervention: a college education. Mitchell had fallen under the spell of a kindly English school teacher named Elvira Whitten, who played her part in his transformation, noticing how sensitive his nature seemed when he was just a 15-year-old pupil in her class.

George wasn't a star athlete like his three older brothers, she realized, so she decided the thing to do was to encourage his reading skills with classic tales from writers like John Steinbeck and others. Mitchell didn't realize it at the time, but she was opening the door to a wider world and to a future that he had never even contemplated.

“I admired her so much that I wanted to do it to please her,” Mitchell told the Irish Voice during an interview on Monday. “For a full year she handed me books every few days and it’s how I started reading. I've continued to this day and I've written five of them myself. All because of one woman.”

Although his parents had virtually no education, they had one goal in life for their children: They were going to go to college.

“My parents drummed that into us from our earliest days. And secondly, we were going to be good and successful Americans. People who don't have education understand its value better than many who do,” Mitchell asserts.

Mitchell's home life was complicated in his teens. He had an up and down relationship with his father for a start.

“It was mostly down during my senior year in high school when he very unfortunately lost his job and was out of work for a year. He had virtually no education,” Mitchell recalls.

“He had been born to Irish immigrants, but he never knew his parents. He was raised in a Catholic orphanage in Boston and he worked steadily since he was 10 years old.”

To be laid off was devastating to the fiercely proud Irish American man and it nearly destroyed his self-esteem, Mitchell says. “I was naive and I didn't comprehend fully what he was going though, so that was a very difficult year,” he adds.

But eventually his father got a job as a janitor at a local college. It was a job he loved.

“When I graduated from college four years later I was waiting to go into the army and I got work at the same college on the grounds crew. My father used to point me out to anyone passing by and say, ‘Look, you need a university degree from Bowdoin to sweep those grounds.’ Then he'd erupt with laughter. It brought us back together again,” says Mitchell, laughing at the treasured memory.

The fourth of four boys and one girl, the family lived in what would now be called a slum area in Maine. But they didn't feel poor because everyone they knew lived the same way. They were the children of textile workers and they lived beside the river. The children slept in one tiny bedroom jammed in two to a bed.

When Mitchell's sister began to outgrow her crib their father found them a new home. “It wasn't much of a house that we moved to, but it was on the right side of the tracks so my father was elated. You'd think he had just built a new mansion,” Mitchell said.

Despite their poverty it was a good life, Mitchell says, because there was love in it. “I have two teenage children now and we all have our own bedroom and bathroom. I often think about the different world I lived in as a child,” he adds.

The competition between George and his much more athletic older brother Robbie was intense growing up. “I loved him and admired him, but we had a lot of battles and I lost most of them,” he laughs.

It was politics that would finally make them all stand level with each other.

“I entered public life by accident,” Mitchell reveals. “My brothers were truly great athletes and I was not, so I had a massive inferiority complex growing up and in true competitive style, they rubbed it in. They made fun of me, they ridiculed me, talked me down every chance they got.”

If he couldn't beat them in sports he would bide his time and beat them some other way.

“After college I was a lawyer in the Justice Department when I received a phone call one day out of the blue from the administrative assistant to Senator Edmund Muskie of Maine,” Mitchell said.

It was the chance of a lifetime. Muskie's department was looking for a young lawyer from their home state to join their staff and asked if Mitchell would be interested. He was.

“I accepted the position, and once I started with him politics got into my blood. I also saw an opportunity to trump my brothers and that really appealed to me,” he says.

Asked what was the greatest moment of his political life, Mitchell, a Democrat who served as majority leader from 1989-1995, doesn't hesitate.

“Without a doubt it was in early November of 1982 when I was elected to a full term in the Senate. On election night at a big celebration at a hotel ballroom in Portland with a crowd of hundreds, the stage was packed. I got up to speak and my brother Johnny, the greatest athlete of all of us, draped himself around me and mugged to the cameras,” Mitchell recalled.

The next day in The Portland Evening Express there was a big picture of Mitchell delivering his victory speech. The caption read: Senator George Mitchell celebrating his landslide victory and being cheered on by an unidentified supporter.

“Well that made my day, it made my year and it made my life. We still kid about it. My famous brother was being called my unidentified supporter,” Mitchell laughs.

Meanwhile, the transformative effect of Mitchell's stewardship of the peace process in Northern Ireland is self-evident to historians now. During his time as President Clinton’s Northern Ireland envoy from 1995-2001, he helped bring long warring political parties to the table and he helped them hammer out a lasting deal.

His effect on Irish history has been extraordinary, but it's the people themselves who are extraordinary he says.

“When I first went I had never been to Northern Ireland. I had only been in the Republic for two days, but I had done enough research to know it was a difficult assignment that was unlikely to succeed,” he says.

The political players were very lucky to have brought the conflict to an end by a hair's breadth with the 1998 Good Friday Agreement right at the end of the process, Mitchell says. The negotiations had begun in June 1996 and they were extremely difficult.

Not once was he able to get all of the parties into the same room at the same time. There was always someone walking out. Some parties were expelled for paramilitary activity. It was very hard to keep it going.

Each day the press asked him when he was going home. Some political parties starting asking him the same question but he persevered. In October of 1997 Mitchell's son Andrew was born as the process continued.

“That first night in the hospital in the United States, as Andrew turned one day old, I held him in my arms and it occurred to me to wonder how many children had been born in Northern Ireland on the same day?” Mitchell wondered.

Sixty-one was the answer. Wouldn't their parents want them to grow up in a society at peace, Mitchell wondered?

“I had been thinking about bowing out of the process now that I had a son to raise, but my wife said if you give up now and sectarian conflict breaks out again you'll never forgive yourself. So I went back and tried.”