Disagreements over the management of the march continue. Dr. John Lahey once again issued an offer of four board seats to the leaders of the AOH, Ladies AOH, United Irish Counties and the Grand Council of United Emerald Societies. 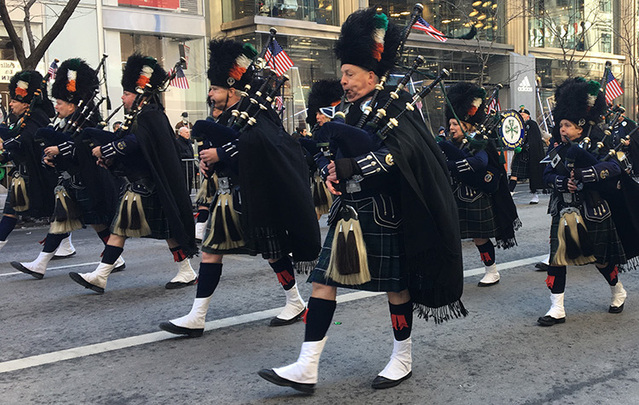 The 2017 New York City St. Patrick’s Day parade has come and gone, but the behind the scenes disagreements over the management of the march continue.   Last week the parade’s board of directors led by chairman Dr. John Lahey once again issued an offer of four board seats to the leaders of the AOH, Ladies AOH, United Irish Counties and the Grand Council of United Emerald Societies to ensure both greater representation of the parade’s affiliated organizations, and compliance with New York State mandates for non-profit groups.

The parade board issued a statement re-iterating its position that those serving in leadership roles on sub-committees have always been members of the board proper.  The board’s Parade and Celebration Committee, elected by the 180 affiliate groups in November of 2015, is not led by any board members and as such has not played an active part in organizing the last two parades.

That committee was formerly led for decades by John Dunleavy, whose role in parade management was downgraded after a June 2015 board meeting. Dunleavy launched a lawsuit against Lahey later in 2015 alleging all actions of the board since that meeting have been illegal.  The lawsuit is still awaiting action in Bronx Supreme Court by Judge Robert Johnson.

The board latest statement said, “The New York City St. Patrick’s Day Board of Directors is made up of dedicated volunteers who have spent 20 years or more working on the Parade.  The board has worked over the last two years to bring its practices into compliance with the highest and best practices recommended for non-profit organizations, subject to oversight by government officials.

“In addition, about 200 dedicated volunteers work every year on the parade, giving many hours to the planning, preparation, and execution of this event.  Without these selfless volunteers, the oldest and largest St. Patrick’s Day parade in the world would not be possible.  The board looks to this pool of volunteers when it enlists new members.”

The board’s statement went on to say that two years ago “three individuals presented themselves and said they should head the Parade and Celebration Committee.   These individuals are not board members and no one recalls that they ever worked as volunteers on the parade.”  Those referenced by the board are John Tully, the chairman of the committee; Dennis Grogan, president of the New York County AOH Board; and John Manning, state treasurer of the New York State AOH.

The board said its offer of four seats, first made in April of last year, still stands. Should the offer be accepted, “From this expanded board, a chair and vice chair of the Parade and Celebration Committee can be named and a committee of board members and non-board members can be formed,” the board’s statement said.

“This proposal addresses the wishes of the affiliated organizations for increased representation; keeps the Board of Directors in compliance with highest and best practices; continues the long tradition of naming board members as chair and vice chair of board committees.”

Denis McCarthy, the corresponding secretary for the Parade and Celebration Committee, says the committee will not agree to what they call a “divide and conquer” proposal offered by the board.

In an email exchange with the Irish Voice, McCarthy said, “Instead of seizing the opportunity to heal and unite the Irish community in a spirit of collaboration, Chairman Lahey and his Napoleon agents continue to proselytize a policy of division and authoritarianism.  It’s a terrible shame the leadership fails to recognize their ploy of divide and conquer has been rejected by ALL umbrella organizations: the UICA, LAOH, Emeralds and AOH.

“The Irish American community and the 180 affiliated organizations have repeatedly spoken – that they want the legally elected officers of the Parade and Celebration Committee to run the parade according to the parade’s bylaws – as well as these officers to represent them in the governance of this 256-year legacy.

“It’s time for Lahey to recognize that the Bylaws were constructed almost 25 years ago – to prevent this abusive attempt to consolidate power away from the true owners of the parade, the 180 Strong.”

The committee also issued an open letter to the Archdiocese of New York and the Irish American community earlier this month which said in part, “This parade also represents the shared egalitarian spirit of our Irish ancestors; forefathers and foremothers who united to form Irish organizations and societies to help one another in charitable need, to promote unity, goodwill, and assistance among the Irish-American people.

“So it is absolutely necessary that the Board of Directors of the St. Patrick’s Day parade act within their authority as ‘stewards’ rather than authoritative owners of a parade that does not belong to them – and restore the parade to its rightful owners!

“It is time the St. Patrick’s parade board leadership restore the democratic voice and vote of the affiliated organizations, represented by the democratic election of the Parade Committee, and in so doing; restore the egalitarian spirit and grassroots foundation of our parade’s affiliations, who the board has always claimed are ‘the very heart and soul of the St. Patrick’s Day parade!”