Is the dyeing of the Chicago River damaging to the water and the environment or a harmless act of celebration? 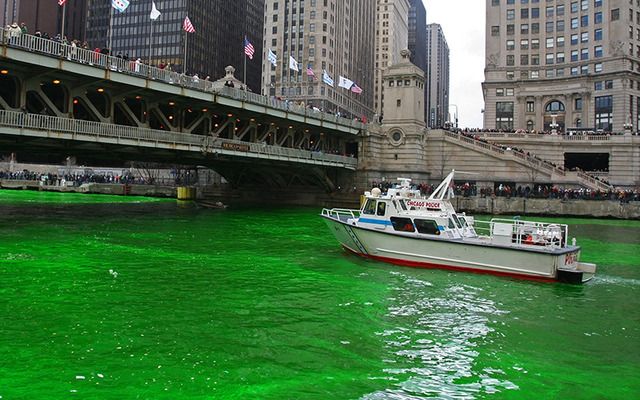 Is the dyeing of the Chicago River damaging to the water and the environment or a harmless act of celebration? iStock

A Chicago environmentalist group believes it is high time to put an end to the St. Patrick’s Day tradition of dyeing the Chicago River green. It's been a St Patrick's Day tradition for more than 50 years now, but the nonprofit Friends of the Chicago River feel that dyeing the river may be ruining the reputation of the river as a healthy environment and preventing further progress in its improvement.

Speaking to Loop North News, Margaret Frisbie, Executive Director of the 6,000-member voluntary group, explained that the river is currently the healthiest it has been in over 150 years. She believes that turning river a shade of radioactive green each year, however, may lead people to believe that the water is as polluted as it once was and prevent any further development in the river as a safe and healthy area.

“We’re getting to the point where, perhaps, dying the river green is not the best way to celebrate St. Patrick’s Day,” said Frisbie, “because we believe that it makes people think that the Chicago River is not as healthy as it actually is.”

First started in 1962, before any kind of permit would have been required by authorities in order to place chemical substances into a body of water such as this, Frisbie states that it is unknown what harm the dye could be causing to the environment as the Chicago Journeymen Plumbers, Local 130, who mix in the vegetable dye each year, have never revealed its exact composition.

“Everyone says it’s a secret recipe,” said Frisbie. “We’ve never seen a permit for what they put in the river. The way that the rules work is that Illinois [Environmental Protection Agency] is required to give a permit to anybody who discharges into the river – anything. And so, they should have a permit that would mean the Illinois EPA has tested and looked into what is in the dye. And if they haven’t done that, then the Illinois EPA is not doing their job.”

The tradition has been overseen by the Chicago Journeymen Plumbers since its inception and they do not believe the 45 pounds of vegetable-based dye has any detrimental or polluting effects on the river and its environment.

Nearly 400,000 people line the Chicago River during the city’s St. Patrick’s Day river-dyeing each year, watching two boats and their teams sift the orange powder into the river sparking the green effect that can last up to a few days, depending on the weather.

The river was also dyed blue last November to celebrate the Cubs World Series championship. The Friends of the Chicago River disagreed with that too.

“We were thrilled that the Cubs won, but it’s a terrible precedent to set, that you can dye the river...for whatever occasion suits you,” Frisbie continued.

Friends of the Chicago River have acknowledged, however, that it is not a pressing concern of theirs to put a stop to the river-dyeing but rather one they hope will receive more attention as the river’s health continues to improve. They do hope to put an end to the practice completely at some point in the future.

The group's aim, since its founding in 1979, is to make the Chicago River one of the world’s greatest metropolitan rivers in the world and to improve the health of the Chicago River system for the benefit of people, plants, and animals.

The river contains 70 species of fish and plants, is used by canoeists and kayakers and there is talk of people swimming in the river someday soon. The environmentalist group wish to address the issue of the river dying in the near future to eradicate any issues that may prevent this from taking place or would delay the development and improvement process.

“We need to rethink how we use it,” Frisbie stated.

“You think about the comparison of ... the Mississippi River, a wild and scenic river – nobody would ever let them dye it green.

“Maybe it goes out with a big hurrah one day where this is it, we’re done, the river is alive, and let’s celebrate a new way – and giant green shamrocks made of food coloring and ice melt away into the river rather than a comedy of color – an amusement park theme as opposed to a natural resource.”

How do you feel about the St. Patrick’s Day tradition in Chicago that turns the river green? Should we be doing more to protect the natural environment or is it a harmless act that should be let continue? Let us know your thoughts in the comments section.