Staten Island bar boycotted American football due to players taking a knee during the national anthem... business has never been better. 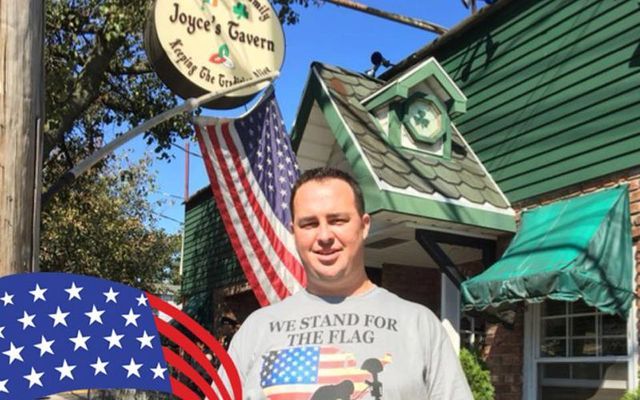 Joseph O’Toole outside of Joyce’s in Staten Island.

A popular Irish bar and restaurant in Staten Island has boycotted the NFL since the second week of the season as a reaction to the players taking a knee during the national anthem, and business has never been better according to the owner.

Joyce’s Tavern in Eltingville, a mainstay for more than 50 years, nixed the NFL from its flat screens on week two of the current season, and instead hosts various fundraisers for local charities every Sunday.  One of the owners of the family-run business, Joseph O’Toole, told our sister publication the Irish Voice that he could no longer tolerate the “disrespect the players taking a knee are showing towards our country.”

O’Toole, a native Staten Islander, added, “The National Anthem isn’t designed for players to express their opinions or beliefs during the playing of it.  What you should do is show respect for your country and your flag and that’s it, end of story.”

O’Toole’s family bought the business from the original owners, the Joyces, almost three years ago.  “It’s very popular and the only true Irish bar around here,” he adds.

In a sign of support for the women and men protecting our nation, our first responders, those that sacrificed their...

Autumn Sundays used to be spent watching the Giants and Jets and all the other NFL teams do battle, but O’Toole – and many of his patrons, he says – was angered last year when the former San Francisco Giants quarterback Colin Kaepernick took a knee during the playing of the National Anthem to protest a string of killings of African American men by police officers.

Kaepernick, now out of a job in the NFL, was soon emulated by other players, and this season the issue came into even sharper focus when President Trump blasted the NFL on multiple occasions for allowing players to kneel during the anthem.  The league has suffered significant TV ratings declines, and O’Toole says the push back is well deserved.  He canceled Joyce’s NFL cable package after week one and has no intention of switching it back on.

“There’s a right way to protest and a wrong way to protest,” he says of the NFL players taking a knee.  “They feel that during the playing of the anthem it’s okay to express their views against Trump, against government, against police brutality and a bunch of other things.  But that is not the time, and I’m really glad that so many Americans agree.”

During the opening week of the current NFL season, O’Toole was in his bar and noticed customers getting angry at players being shown on their knees during the anthem.  “People were like, turn this off, we don’t need to watch them,” he says.

The NFL hasn’t been on Joyce’s screens since.  Instead, fundraisers have been held every Sunday from 2-6 p.m. for local charities.  Last Sunday’s event raised hundreds of dollars for the Wounded Warrior Project in honor of Veterans Day.  Every Sunday afternoon the bar is packed, and, O’Toole says, Joyce’s hasn’t lost a penny in business since boycotting the NFL.

“Absolutely not, 99.9 percent of our patrons are totally behind us.  I’m representing my family and our customers, and this is how we feel.  I’m not going to just be another fish in the sea and show football on Sundays when this disrespect is going on.  I don’t need the NFL.”

Several veterans were on hand last Sunday for the Wounded Warrior party, and O’Toole says he was “overwhelmed” with their support.

“Here they were giving me congratulations and thanks for dumping the NFL, and I said, ‘You’re the guys who make our freedom possible.’ They’re the ones who go to Iraq and Afghanistan and put their lives on the line for us. They, and the flag they represent, deserve nothing but respect.”

O’Toole feels that the young people of today aren’t properly learning how to respect one another.  He wonders what America will be like 20 years from now, and recalls when the country was united in the aftermath of the 9-11 attacks.

“Everyone was so pro-America then, pro-military and pro-each other. No one was Republican or liberal, everyone was thankful for the police and fire departments. Now it’s the dead opposite,” O’Toole feels.

Kaepernick being named as Citizen of the Year by GQ magazine on Monday was a shocker, O’Toole says, “because of everything that he’s done.”

“He’s responsible for ripping apart the NFL.  He has an opinion and that’s fine. As Americans we are allowed to demonstrate and protest and there are many different ways to do it, but the National Anthem and our flag isn’t one of those ways.  I thought the announcement of him getting an award was fake news.”

Joyce’s Tavern celebrates St. Patrick’s Day and hosts live music events throughout the year.  One occasion that won’t be marked in 2018?  The Super Bowl.

“Nope. No way,” says O’Toole.  “We have lots of great ideas of how we will spend Super Bowl Sunday, but watching the game won’t be one of them, that’s for sure.”