Chairman-elect of New York's St. Patrick’s Day parade is eager to leave past disputes behind and focus on the future. 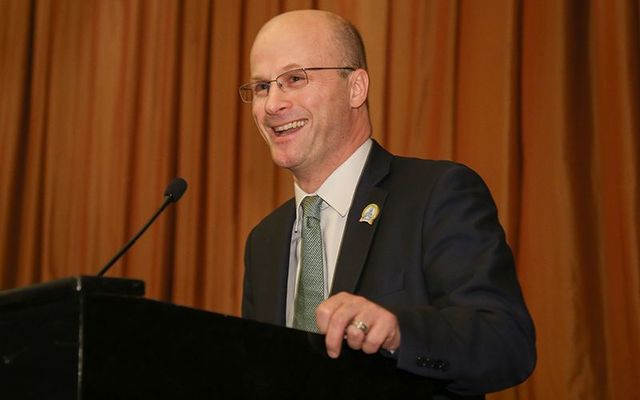 Chairman-elect of New York's St. Patrick’s Day parade is eager to leave past disputes behind and focus on the future.

The chairman-elect of the New York City St. Patrick’s Day parade is eager to focus on the event’s future and leave past disputes behind, and is willing to meet with leaders of the parade’s affiliated organizations in order to do so.

Sean Lane, 50, a native of New York but raised in Galway from the age of 10, was elected to succeed the retiring chairman Dr. John Lahey at a meeting of the parade’s board on Monday, May 14.  Lane first joined the board in 2017 and has been active in the parade community for several years, having co-founded the New York parade’s main fundraising arm, the St. Patrick’s Foundation, in 2012.

The parade’s affiliate organizations have argued that their role in the annual march up Fifth Avenue has been diminished under Lahey’s leadership, a contention that Lane disagrees with.  During an interview on Monday, he told the Irish Voice that he is willing to meet with the affiliates “at any time.”

“I’m happy to. I’ve said that I think there’s a lot of misinformation out there, and I think it’s just a question of sitting down and explaining what’s going on.

“But the leaders of the four main affiliate groups [the AOH, LAOH, United Irish Counties and Emeralds] were offered seats on the board some time ago by John Lahey and they should join. I don’t know why they won’t.”

Pipers on Fifth Avenue during the St. Patrick's Day parade.

“I’ve said it repeatedly, the affiliate leaders should join the board. The fairest and most visible way for them to know what is going on is to have their leaders on board, this way they know everything,” he added.

“There won’t be any misinformation if they are sitting in the room and voting on everything.  I have no problem with that at all.”

When Lane takes over from Lahey on July 1, he looks forward to taking the parade’s reputation as being one of the most prominent in the world to greater heights.  Building a positive working relationship with the affiliates, and promoting their worthy causes, is top of his to-do list.

Read more: "Minstrel Boy" is the most-performed song in the world on St. Patrick’s Day

“Obviously we all stand on the shoulders of those who came before us. We’ve had 257 parades and we’re in a position where we can grow and advance,” said Lane, who added that he looks forward to when a decision will be rendered by Bronx Supreme Court Judge Robert Johnson on a years-old lawsuit launched by board member and former parade leader John Dunleavy against Lahey’s leadership.

“Once that is out of the way we can focus on things we really think are important, such as fundraising for scholarships. If you look at the New York Columbus Day parade, they give out 600 scholarships. This year we gave nine.  We’re in a great position to change that.”

Lane made a point of saying that the parade won’t become “commercialized.  And we’re not going to have floats or things like that. It’s very important that we remain true to first and foremost celebrating our faith, heritage, and culture, and that’s what we are going to do.”

Lane’s parents – his father from Galway, and mother born in Belfast but raised between Mayo and Dublin – met after immigrating to New York in the 1950s.  They had four children here before relocating to Ireland to raise their family.

Lane took a job as a busboy and toilet cleaner at the Skeff Bar in Galway City to pay his college expenses at University College Galway, where he graduated with a BA in French and English in 1987. He also did his post-grad degree in business studies at UCG, working multiple bar jobs all the while, but eventually reached a career dead end which prompted his choice to return to New York.

“I was working all the hours in the week, like 80 or something, and still making only £90. I decided I had enough of starving and thought I would head back,” Lane recalled.

His first port of call in Manhattan was the great Mayo man and restaurateur Austin Delaney, who Lane used to meet while waiting tables at a hotel Delaney stayed in during the Galway Races.

“He was a great man and told me if I ever came to New York to look him up.  My brother worked for Austin at Harbour Lights in South Street Seaport before I did and that’s where I went as soon as I got off the plane,” Lane said.

“Austin was a great man. He always gave every Irish person he met a chance.”

Lane worked at Harbour Lights for nearly a year, applying for various jobs in finance until a customer linked him with a connection at Smith Barney.   It was a junior job, but Lane was on his way.

“I made the princely sum of $300 a week at the time which was fine. I worked there for nearly five years and progressed from there,” he says.

Today, after a number of senior positions in various leading financial institutions, Lane is a senior vice president for a major Wall Street firm.  He lives on Long Island with his wife Cielo, a native of the Philippines who works for the United Nations, and their two children, Sarah, 14, and Ryan, 12, who is a regular marcher in the St. Patrick’s Day parade with his father.

Lane is a member of the U.S. board of UCG, and through this involvement, he became acquainted with those working on the New York parade, including the late parade vice chairman John Fitzsimons and the executive secretary Hilary Beirne.

“Hilary and I had the idea of launching the St. Patrick’s Foundation because the parade had a great need for financial stability,” Lane said.  “It was an enormous amount of work to produce the parade every year but there was no effort on fundraising. So that’s what we set about doing, getting more support for the greatest parade in the world.”

Lane looks forward to diving into his new chairman duties, and at some point hopes to have in place a full-time parade employee who can outreach to the various affiliate organizations.

“It’s a lot of work,” Lane says, “but I’ve never been shy about work and I’m looking forward to it. There’s a huge amount of good that we can do and that’s the plan.”

Read more: The “Son of Sam” Summer and the Irish cop who caught the NY serial killer