Snowstorm wrecks havoc on Irish leader's schedule forcing him to cancel several events to ensure his presence in Washington DC for Thursday. 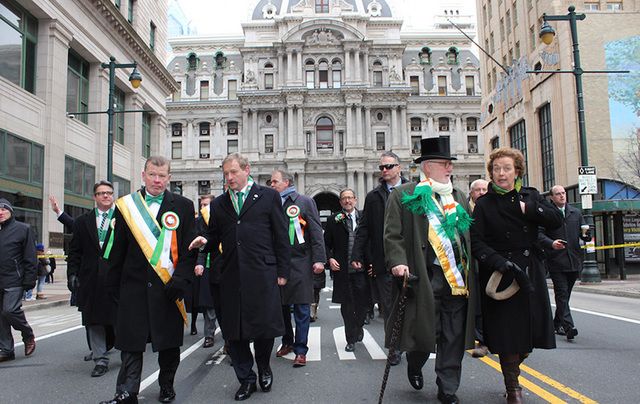 Tuesday's snowstorm on the East Coast wreaked havoc on a part of Taoiseach Enda Kenny’s U.S. schedule during his week-long visit to the U.S., forcing him to cancel several events to ensure his presence in Washington, D.C. for a Thursday White House meeting with President Donald Trump.

Among the engagements he was forced to cancel were an event at the JFK Library in Boston on Monday night, and a full schedule of appearance on Tuesday in Providence Rhode Island, including a meeting with the state’s governor Gina Raimondo and one with Norwegian Airlines, which will soon begin regular service from the U.S. to Ireland.

Prior to traveling to Washington by Amtrak on Monday night, Kenny, making his last trip to the U.S. as Taoiseach, met with Boston Mayor Marty Walsh at City Hall. Kenny has promised to advocate for the undocumented Irish during his time with President Trump at the White House on Thursday, but Walsh told the press, with Kenny standing by his side, that he wouldn’t support any type of special arrangements solely for the Irish.

"I'm a proud son of Irish immigrants, but I would not be supportive of rules and regulations that just benefit people who are undocumented Irish,” Walsh said.

"As mayor of Boston I have an obligation to represent all of the people in our city and that means all of the countries here. So, I couldn't support something that just benefited one country.”

Kenny said that he didn’t “agree with blanket bans on any country … we need the opportunity for a path to legitimization here, but it's not just about the Irish. It's not just in the case of Ireland, but also many others.

"It's not a case of picking and choosing. There are 11 million people in the U.S. who do not have the required documentation," he said.

Kenny attended several events in Philadelphia on Sunday, including marching in the city’s St. Patrick’s Day Parade.  He also gave a speech at the city’s Irish Famine Memorial, and attended a reception hosted by the local GAA, Brehon Law Society, the Irish American Business Chamber and the Irish Immigration Center.  On Saturday, he spoke at the annual Friendly Sons of St. Patrick Philadelphia dinner, and promised to discuss the undocumented Irish with Trump.

“It will be no surprise to anyone here that one of my absolute priorities in meeting Vice President Pence, President Trump and other senior political figures this coming week is to renew the strong case on behalf of the hard-working, tax-paying Irish people in the United States who for too long now have been living in the shadows, and want nothing more than to continue making their contribution to this great country,” he said.

“We all understand that immigration reform is a politically sensitive issue. However, I truly believe that a U.S. immigration system that addresses the needs of the undocumented Irish, and provides for future legal flows, will be of huge benefit to America.”

On Friday, Kenny will head early to New York to march in the St. Patrick’s Day parade.  He will also attend an Irish event at Bloomberg headquarters, and a Tourism Ireland event at One World Trade Center.