"Whatever ills our country is facing these days, Lieutenant Kennedy, and the Irish American vets of Inwood, faced a whole lot worse." 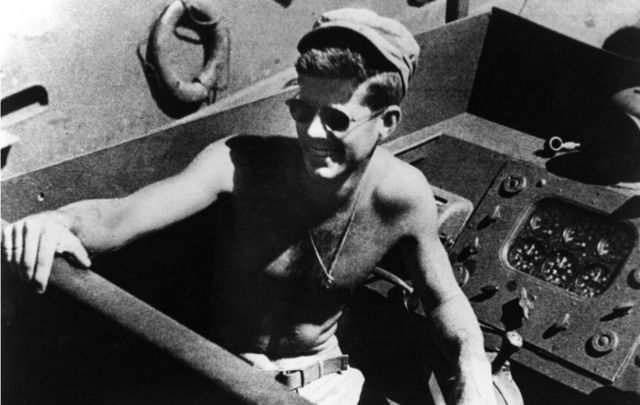 Naval Lieutenant and future President John F Kennedy on board the torpedo boat he commanded in the Southwest Pacific. Getty Images

Back in late May, as the number of new coronavirus cases in New York City was finally about to dip below 1,000, down from over 12,000 a day in early April, several people gathered in northern Manhattan to watch a crane sift through the muck of the Harlem River, in search of a bit of presidential history.

*Editor's Note: This column first appeared in the October 2020 edition of the Irish Voice newspaper, sister publication to IrishCentral.

And perhaps you’ve heard there’s an election coming up. So maybe whatever the north Manhattan muck yields could help us through these trying times.

The story goes that about 50 years ago, a college teacher named Redmond Burke purchased a boat and docked it at a pier off of 208th Street, in the upper Manhattan neighborhood of Inwood.

Burke was going to try living on the boat. New York City rents back then were not as high as they are now. But no rent is still the cheapest rent of all.

“It was an adventure for me,” Burke told The New York Times back in June. “It was me, the rats, and the few corpses that came floating by.”

Using the boat’s hull number, Burke and his students also began researching the vessel’s history and found out that during World War II, it was commanded by a Navy lieutenant named John Fitzgerald Kennedy, who’d made a bit of a name for himself with his actions on another boat, the PT-109, before moving on to a career in politics.

Which did not prevent the boat from falling into disrepair, and eventually sinking, settling into the muck of northern Manhattan. Where it remained until the MTA brought in cranes to bring the vessel to the surface, as part of a project to keep the 207th Street train yard from flooding.

JFK’s old boat -- what’s left of it, anyway -- may or may not end up at his presidential library in Boston.

But whatever his many shortcomings, it’s nice, what with Veteran’s Day nearly upon us, to think of a president who served his country with such valor, and who could deliver an inspiring speech without ever once swearing.

It’s also fitting that a fellow named Burke found a boat once used by a fellow named Kennedy in Inwood. It’s one of New York’s great, old Irish neighborhoods, with generations going to christenings and funerals at Good Shepherd church on Broadway.

Go to YouTube and look up a fascinating short documentary called Goodbye to Glocamorra. Shot by an RTE crew that made the trip from Ireland to Inwood in the late 1960s, the film captures the neighborhood in transition.

Newcomers from the Dominican Republic or Puerto Rico, or African Americans from the southern U.S., were moving into the apartments above the bars and storefronts along Broadway.

Many Irish were moving up to Rockland County, or out to Long Island.

But not all of them. Had the RTE film crew taken a five-minute stroll from Good Shepherd, along Isham Street, over to Sherman Avenue, they’d have arrived at Doc Fiddler’s bar and met George Lynch, affectionately known to all as “the Colonel” which was “an honorary title, since he had made only private first class in the army,” as John “Chick” Donohue writes in a new, updated version of his book, and soon to be a full-length film, The Greatest Beer Run Ever.

On a chilly November night at Doc Fiddler’s in 1967, Lynch and Donohue concocted a plan to deliver beer to the Irish boys from the neighborhood who were serving in Vietnam.

It was a strange time in America. All those angry protesters in Central Park, and elsewhere.

It seemed disrespectful to veterans like Donohue and Lynch, especially since, as “of late 1967, Inwood had already buried 28 brothers, cousins, and friends who had been killed in Vietnam,” Donohue wrote.

It’s an amazing, heart-warming story. And as he’s thinking about Americans in Vietnam, Donohue can’t help but think about the English in Ireland.

Then, as now, things are complicated.

Similarly, for all that we lose when great neighborhoods like Inwood change, we should also remember that they only became great as a result of a whole bunch of other changes.

And that whatever ills our country is facing these days, Lieutenant Kennedy, and the Irish American vets of Inwood, faced a whole lot worse.