Review of James Joyce's The Dead, 1904, staged by the Irish Repertory Theatre, in New York City. 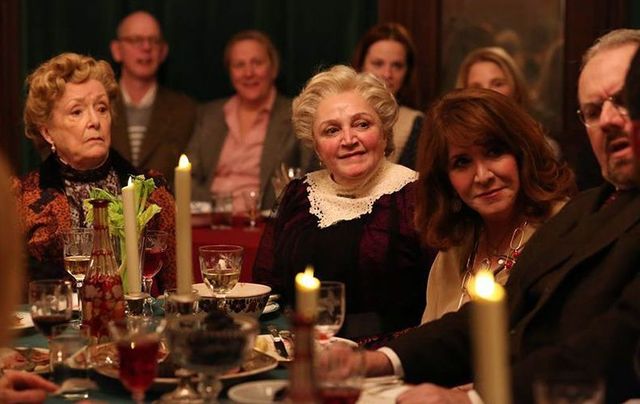 Review of James Joyce's The Dead, 1904, staged by the Irish Repertory Theatre, in New York City.

There's a good reason James Joyce's The Dead, 1904 is still one of the hottest theatrical tickets in New York for two years running. The novella on which the show is based is already an acknowledged masterpiece, which means the decision by writers Paul Muldoon and Jean Hanff Korelitz to turn the famous story into a live performance (in association with the Irish Repertory Theatre) is an inspired and welcome way of sharing and extending its constituency.

The demand for tickets is remarkable, so it can only be hoped that this extraordinary experience becomes an annual production for both the Rep and the American Irish Historical Society on Fifth Avenue.

From the moment you arrive at the society, where the show is currently being presented, there is a palpable sense of occasion, and that welcoming holiday atmosphere feels entirely right. In both his story and his life Joyce celebrated the hospitality for which the Irish are rightly famous and in this note perfect production, which unfolds in the drawing rooms, dining rooms and bedrooms of his unforgettable characters, you will feel that you're not only an observer, you may even become a participant.

If you don't know the famous story you won't need to. Suffice to say that it's the Feast of the Epiphany, and an eccentric group of luminaries and advocates of the Dublin musical scene have assembled for the annual dance and dinner party presented by Kate and Julia Morkan and their young niece Mary Jane, while their overworked housemaid Lily frantically shepherds the arriving guests.

From the first moment there's a frisson in the air that promises whatever happens tonight, it will not be dull. People of wildly contrasting experience, outlooks, sensibilities, faith and financial means are companions for an evening, with both the predictable and unpredictable results that suggests.

Almost as soon as we arrive conflict erupts between them, but there is also sherry, port and fine whiskey to take the edge off some of their more pointed exchanges. As the audience takes our bearings, the actors begin the play with an ease and effortlessness that fools you into thinking that you're eavesdropping on some conversations rather than watching a scene unfold.

Just as the Morkan's guests have all been promised dinner, so you will soon join them for an elaborate sit down meal in the society dining room (presented by the famous catering company Great Performances, which means your dinner will be very bit as satisfying as the play).

But this isn't the tacky dinner theater beloved by retirees, and there won't be a murder to solve.  Instead you'll be part of an experience that's richer and infinitely more rewarding. Joyce has set himself the task of producing a vivid portrait of his own countrymen and women, holding a mirror up to them, and celebrating and lamenting what he sees.

The decision to stage the show in the impressively salubrious surroundings of the American Irish Historical Society works a magic that setting it in a theater cannot. Suddenly the living rooms and hallways give a shape and dimension to Joyce's characters and settings, even if the society is a space that's admittedly much grander than the one Joyce describes.

The actors do such a remarkable job with their respective characters that many remain in character from the moment they appear until their final bows. Aedin Moloney is perfectly cast as Molly Ivors, the fiery Irish nationalist who harpoons one of the guests of honor, the lamentable so-called “West Brit” Gabriel Conroy (Rufus Collins) the moment she sets eyes on him.

Clare O'Malley sets the tone for the entire proceedings from the moment she appears as Lily, the spirited and disarmingly expressive maid. O'Malley understands Irish informality and its uses, and she keeps the evening and the guests (including the audience) on track with an attention to detail that I found astounding.

Terry Donnelly is hilarious as the bumptious Mrs. Malins (her line readings are superb), and James Russell gives such a convincing performance as her dipsomaniac but decent son Freddy that you often fear for his well being (he disappears so deeply into character that I wonder if he ever has trouble emerging) it's remarkable work by these gifted artists.

Like Joyce's original short story, the meaning of The Dead, 1904 accrues with its metaphors. We watch a proud but overlooked city and the people who dwell in it recall older, usually better times. But all night there is a under music of lament that rises and rises as the night progresses and that this production (directed by Ciaran O'Reilly) handles masterfully.

We can drink and we can feast and we can sing and give speeches the play reminds us, but our history has become a kind of haunting, and it waits for us, like the young man who once waited for Greta, and it will not be denied.

(For tickets and showtimes, visit www.irishrep.org)

Read more: Atlas of the Irish Revolution among greatest Irish history books ever?