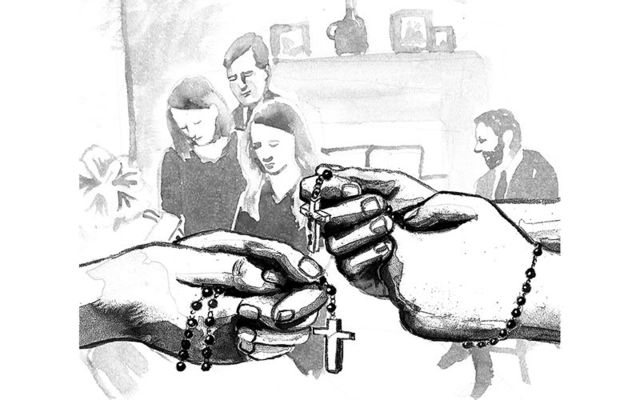 Irish women take on the role of Catholic priests in Ireland. Caty Bartholomew

I was touched to the core a few evenings ago above in the high wonderland of the Burren in North Clare when I was introduced to two special countrywomen sitting quietly together at a cafe table.

I don’t know if some of you out there in the Celtic brand of the Diaspora are as interested as I am in the dramatic social, political, and economic changes in the Emerald Isle over the last 20 years or thereabouts, but I think many of you will find this apparently slight story to be an extremely revealing one at several levels.

It certainly brought tears to my own eyes when I sat down to write this for you while recalling the central family ritual of the Rosary in every Catholic home of the recent past when we were absolutely ruled and guided by the allegedly Holy Roman Catholic and Apostolic Church.

Read more: When the Bishops banned dancing during Lent

We all are aware that the Catholic Church has fallen heavily from its pedestal of the past. The recent summit in Rome was really a plummet into hard reality by its leaders.

The sins of the past, especially those revealing the widespread sexual abuse of innocent children, in Ireland and elsewhere, were confessed openly at last. Princes of the church are being convicted of major sexual abuses, often against minors, and are being ordered to serve jail sentences in many instances.

Leading Catholic clergy are being defrocked, silenced and publicly disgraced. In the centuries when we all got down upon our knees around the hearths of home every evening, who would have believed that day would ever come? Chapels are often empty on Sundays as the laity finally sees the light of truth.

Against this background I was deeply touched by the story I was told about the two middle-aged ladies I met.  Do ye know what they do in their own area of Clare?

When a family suffers a bereavement these two ladies go to the home of the deceased and together deliver what is effectively the healing ritual mantra of the Rosary during the wake.  They know the Rosary and all its “trimmings” intimately at a time when an increasing number of bereaved families do not at all.

These ladies of mercy know when it is the right evening to utter the Joyful mysteries, for example, or the Sorrowful mysteries or the happier and more heartwarming Glorious mysteries.

That vocal ritual in the dead house, rising and falling in perfect time, creates a kind of modern parable, if you like, as the rosary beads click out the five decades strung along them.  I’m told it gives great solace and peace to the families who’ve been bereaved and who might not have attended any chapel for years because of all the circumstances we now have revealed to us week after shocking week.

Those two quiet countrywomen, in their own way, are preaching the power of prayer far more effectively and poignantly than even the majority of genuinely good priests among us are allowed to do today because of the crimes of their leaders. That is the real Sorrowful Mystery, is it not.

The pair of ladies bring even more than the mantra of the Rosary to the stricken homes, whatever the circumstances of the deaths. After the praying is over they offer practical information and counseling to the bereaved.

They have all the information at their fingertips about the steps which the families should take in relation to availing of state bereavement requirements and facilities that have to be discharged promptly to keep on the right side of the law. A member of a family they assisted last year said to me, “When they crossed our doorstep in the bad times of the wake and started off the Rosary around the hearth they were worth far more to us to heal and help practically than any three bishops or even a cardinal with a red hat.”

I can readily understand that in these changed new times when the croziers of Catholic control are no longer swinging all over the place.

So there ye have it as the penitential season of Lent hangs over our heads again in a changed Ireland where the chairs are no longer ringed around the hearthstone every evening as they were in your childhood and mine.  And when fewer and fewer nominal Catholics have forgotten upon which evening you tell the story of the Sorrowful Mysteries.

A changed Ireland indeed as we advance towards a different Easter too!

Should Ireland laity be given more power and responsibilty in the Catholic Church as the numbers of priests continue to drop? Let us know your thoughts and experiences in the comments section below.