Sinn Fein are offering simple solutions to complex problems, which are impossible, and a quarter of Ireland's voting population bought it. 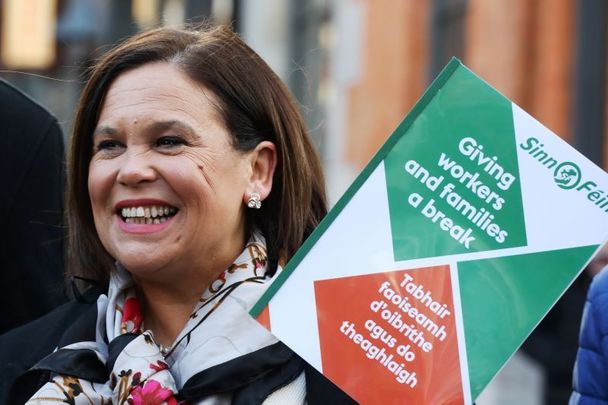 Sinn Fein are offering simple solutions to complex problems, which are impossible, and a quarter of Ireland's voting population bought it.

The outcome of the election here -- roughly a three-way tie between Sinn Fein, Fianna Fail, and Fine Gael -- is rightly being seen as a historic moment in the political development of the country.

Sinn Fein's emergence as the equal of Fianna Fail and Fine Gael, the two main parties that have run the state since its foundation, is hugely significant.  In several ways, it is to be welcomed, even by people who have serious doubts about their suitability for government.

Firstly, it will move Sinn Fein further away from its symbiotic relationship with the IRA and further into the democratic political mainstream and constitutional nationalism.  Secondly, on economic matters, it will force Sinn Fein to start dealing in reality rather than fantasy if, as now seems likely, it becomes part of whatever coalition government is formed in the coming weeks.

Of the two, this dose of reality on economics is the most relevant point here in the south, particularly after the bonanza of giveaways promised by Sinn Fein during the campaign, a recipe that would bankrupt the country a second time.  The party's present economic policy is tax and spend on steroids to a degree that makes Bernie Sanders look like an arch capitalist.  In the real world, it does not work unless you want Ireland to become Venezuela.

During the campaign, for example, Sinn Fein promised to cut income tax for most people, end property tax, freeze rents and provide free university education for all, among a host of other giveaways.  It proposed twice as much state spending as the other parties and twice what the Department of Finance said might be possible if present growth rates continue.

To pay for all this it wants a heavy tax regime on companies, a penal income tax rate for high earners and a wealth tax -- and a resumption of state borrowing despite the huge national debt we already have.  The effect of this on economic growth and foreign investment (including all the jobs that brings) would be very negative as we see already from a sharp fall in share prices here when the market opened on Monday.

Sinn Fein also promised quick and easy solutions to the complex problems we have in housing and health when none exists.  These were the defining issues of the campaign and a lot of Sinn Fein voters now expect instant results, which is impossible.

That is something the party will be faced with immediately if it arrives at the Cabinet table.  It will be a cold awakening for both the party and its voters.  A period in government, with all the limitations and responsibilities that entails, may be just what Sinn Fein needs at this point, according to its critics.

So there are positives to the emergence of Sinn Fein into a leading role here in the south, even for those who oppose them.  It's an evolution that had to happen at some stage, although many people here feel it is premature at this point because of the shadowy figures in the North who still call the shots (pardon the pun) in the party.

The arrival of Sinn Fein as an equal raises a number of questions for the two parties that have dominated government here up to now.

The outcome of the election means that neither Fianna Fail nor Fine Gael will have the numbers to form a government without involving Sinn Fein. They had hoped that the smaller parties like Labour and the Greens plus some independents would provide enough support to make the inclusion of Sinn Fein avoidable.

At the time of writing, with many seats still to be decided, it is already clear that the numbers will make that impossible.  And Fianna Fail has ruled out a grand coalition with Fine Gael.

That means a coalition involving Sinn Fein will be a necessity.  The problem is that both Fianna Fail and Fine Gael have said they would not go into government with them for two reasons -- moral principle and economic practicality.  We will come back to the economic issue, but it is the moral question that now lies ahead.

The Fianna Fail leader Micheal Martin emphasized this moral difficulty during the campaign.  It's not just Sinn Fein's refusal to disavow any of the appalling IRA violence that took place during the 30 years of The Troubles.  It's their equivocation about more recent incidents that happened years after the Good Friday Agreement, like the grotesque murders of Robert McCartney and Paul Quinn, for example.

In the election campaign, a partial apology to the Quinn family had to be dragged from Sinn Fein, a grim illustration of where the party is really at in relation to these issues.

Read more: The Wolfe Tones say Sinn Féin TD has no need to apologize for "Up the Ra" comment

The fact is punishment beatings and shootings are still going on in the North even now, especially when local Sinn Fein/former IRA men feel they have been insulted or their authority questioned.  We have had incidents in the south as well, like the murder of Joseph Rafferty.

The involvement in ordinary criminality by some of those who were part of the IRA campaign has continued, wrapped in a green flag of convenience, years after the peace.  Again and again we have seen Sinn Fein failing to deal with this, hiding behind appeals to anyone with information to contact the police even though they know people are terrified of the consequences of doing so.

It is this tolerance by Sinn Fein of behavior that is both immoral and a challenge to the rule of law in a democracy that poses a problem for both Fianna Fail and Fine Gael.  As Martin said recently, the culture this creates undermines the morality of our society.  For the most part it remains hidden, but the mentality that goes with it emerged during the Sinn Fein celebrations last weekend.  There were “Up the RA” shouts at a few of the count centers, and the IRA anthem “Come Out Ye Black and Tans” was sung by Sinn Fein's Dessie Ellis (the former bomber) and his supporters when he was elected in Dublin.

What are the two main parties to do?

Despite his misgivings, Martin may yet fudge the issue if it means he becomes taoiseach.  Fine Gael leader and Taoiseach Leo Varadkar will do the same if he gets the chance, although he is behind Fianna Fail in the seats needed to form a government and said on Monday that he wouldn’t do a deal with Sinn Fein.

The excuse will be that the people have spoken and the election outcome demands a compromise that includes Sinn Fein, even if there are problems of principle.  We are already hearing this line from Martin who is talking about "respecting democracy.”

To hide this abandonment of principle, there will be much talk in the coming days and weeks of the gulf that exists between Sinn Fein's economic policies and those of both Fianna Fail and Fine Gael.  If a coalition is formed, the extent that Sinn Fein's policies will have to be watered down will be a shock to many of its voters.

That will pose problems for the party's leaders but they only have themselves to blame given the reckless election campaign they ran promising everything to everyone.

Sinn Fein even opposes carbon taxes, for example, despite the concern about global warming and the fact that all the other parties here support them.  Nothing was off the table in Sinn Fein's drive to buy votes.  Their election policy platform was a populist appeal with a left-wing flavor and a promise of "real change.”

Around a quarter of the electorate swallowed it and voted for them.

It was this longing among voters for "real change" without delay that came to define the campaign and which explains why Fine Gael has come in third.  It was not what the government party expected when Varadkar called the election.

Fine Gael had rescued the country after the crash and we were back, just nine years later, with almost full employment and the fastest growing economy in Europe.  If elections are all about the economy stupid, Fine Gael should have romped back into power.  On top of that Brexit had been handled well by Varadkar, avoiding a land border in Ireland.

But beneath this success story, another narrative was building among the public -- one of problems in the health service, a crisis in housing, the high cost of living.

Typical of this were stories of young families who had managed to buy a home, often far outside our cities, with both parents working, paying for exorbitant child care, spending hours commuting, being stressed all the time, having no money left at the end of the month when the mortgage was paid.

Many more young people had been caught in the high rent trap, could not save and had given up on ever being able to buy their own home.  And there were all the young adults who had moved back in to live with their parents.

Stories like these filled the media on a weekly basis, along with upsetting stories of elderly people stuck on trolleys in overcrowded hospitals.  Faced with this narrative, claims of Brexit success were irrelevant.  The macroeconomic numbers were unconvincing when people were feeling the pinch at the micro-level.

The facts tell a different story.  Hospital overcrowding here is similar to elsewhere, and we spend more on health than most other countries in Europe.  Fine Gael has been adding bed capacity to the system, reversing the cutbacks made after the crash, but it was not fast enough to satisfy voters.

Similarly, on the housing crisis, more social housing is being provided and private building has taken off again after years following the crash when nothing was built.  Rents have now stabilized and house prices in Dublin have started to fall as the market catches up.

But again progress has been slow and voters wanted quick and easy solutions.  Which is where Sinn Fein came in, with its promise of drastic change.
No doubt there are senior people in Sinn Fein -- and in West Belfast -- who know that their election manifesto was and is pie in the sky, unrealistic, unachievable and irresponsible.  It's a con job.

But they don't care since this was all about bribing the voters to get Sinn Fein into government in the south as well as the North so they can push their border poll and United Ireland agenda.  Hopefully, they won’t bankrupt the country again while they are doing so.