When the old mains pipes burst leaving thousands of people with no water, Fianna Fail and Sinn Fein criticized the "incompetence" of Irish Water, funded by the government... the brass neck of it! 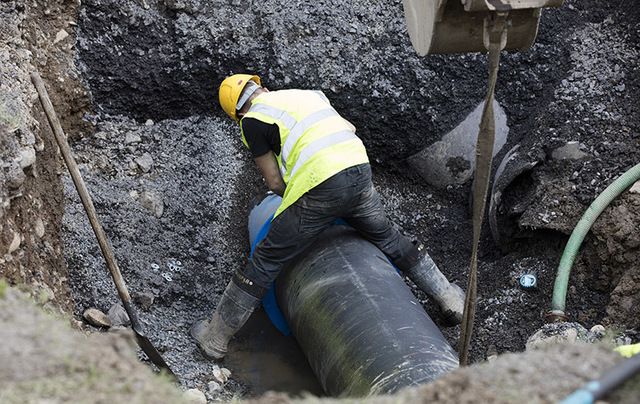 When the old mains pipes burst leaving thousands of people with no water, Fianna Fail and Sinn Fein criticized the "incompetence" of Irish Water, funded by the government... the brass neck of it!

Just as we went on our short summer break a couple of weeks ago, a water crisis hit the north east of Ireland. Large areas in counties Meath and Louth, including the major town of Drogheda, were left without water for six days when an old mains water pipe deep underground burst.  Thousands of homes and businesses were affected.

In the same week on the other side of the country the beach at Kilkee in Co. Clare had to be closed for days when the local foul water system malfunctioned and pollution poured into the sea.  Kilkee is one of the most popular beaches on the west coast. Making it even more embarrassing, the closure came just as the town was about to hold its Marquee by the Sea festival.

Both incidents were revealing examples of the water fiasco we are facing in Ireland.  Nor were they the only incidents so far this summer.

Several popular beaches on the east coast, including the one outside my own back door, had No Swim notices up over the past few weeks. And in several areas around the country Boil Water notices were issued. In one area in Co. Offaly 10,000 homes were affected for days, meaning that water coming out of taps had to be boiled to make it fit for drinking or cooking.

This column has explained the background to the water crisis here several times over the past couple of years so we don't need to go through it all again.  The system, some of it over 100 years old and which had been split between 30 local authorities, needs massive investment.  The answer was supposed to be Irish Water, the national utility set up in 2013 to carry out the work and begin metering and charging consumers to pay the billions it would cost.

No one likes paying extra charges (effectively a new tax), but anyone with half a brain knows that paying for water based on the amount used is essential if we are to raise the money desperately needed for investment in the system.

Despite this, however, Irish Water has now become a lame duck since the price of Fianna Fail support for the present government was to cut off its funding by ending water charges.  The new national utility has been undermined by Fianna Fail, Sinn Fein and the independent politicians on the left, all of whom have opposed water charges to try to win a few extra votes.

The fact that both Sinn Fein and Fianna Fail had supported the introduction of water charges when they were first mooted about a decade ago did not stop them doing a complete about turn over the past few years in a nauseating display of cynical populist politics.

Sinn Fein had been spooked when a hard left, anti-water charges candidate took a Dail seat they had expected to win.  And Fianna Fail followed their lead because they did not want the Shinners gaining seats they might win.

It's an example of the short-term thinking that bedevils Irish politics.  Everyone knows we need to spend billions updating the water system, and the majority of people had signed up with Irish Water when metering and charges were introduced.

But fixing the water system is a long-term project, with little immediate political gain.  In the short term the minority who were refusing to pay the charges presented a political opportunity which Fianna Fail and Sinn Fein could not resist.  So they undermined the whole project and we are left with the present mess.

Irish Water now has no source of funding except the state, and that means it has to compete with the health service and all the other state services that eat up the budget every year.   Other demands, like reducing hospital waiting lists, always seem more urgent.  And that means investment in water infrastructure will now be slow and inadequate -- and we will have even more water problems in the future like we have seen this summer.

When the old mains pipe serving parts of Louth and Meath burst a couple of weeks back and left thousands of people with no water, Fianna Fail and Sinn Fein reacted by criticizing the "incompetence" of Irish Water.  For brass neck, you can't beat these guys.

Sinn Fein leader Gerry Adams, who represents Louth in the Dail and has his constituency office in Drogheda, was particularly vocal and angry, even though it was his party that took the lead role in undermining Irish Water.

Barry Cowen, the Fianna Fail spokesman on the environment (and brother of the former taoiseach) who represents Offaly in the Dail was equally two-faced.  Even though parts of Offaly were enduing a Boil Water notice at the same time as Louth was running dry, Cowen gave a bravura performance on TV making scathing comments about the "failures" of both Irish Water and the government.

It was not only stomach-turning to listen to Gerry and Barry, it was also deeply depressing.  After all the talk about responsible "new politics" here, we seemed to be back to the old politics of short-term thinking and cynical vote-buying.

We expect this from Sinn Fein, who will do anything to further their single item agenda.  But it is very disappointing that a national party like Fianna Fail would jump on the anti-water charges bandwagon and abandon any responsibility for doing the right thing for the country.

More than anything else recently, their duplicity over the water issue has shown that neither Fianna Fail nor Sinn Fein are suitable candidates for government.  They don't do long-term thinking, and they don't have the moral courage to take the hard decisions that being in power requires.

The tragedy of all this is that although being anti-water charges may have boosted Fianna Fail and Sinn Fein in the last election, water will have to be paid for eventually.  Doing so is now part of EU water standards and conservation policy.  And there is no other way to fund the billions needed in investment.

The regime that was being implemented before Fianna Fail pulled the plug was relatively fair, with a free allowance for basic use in homes dependent on family size and protection for the vulnerable.   Close to 70 percent of people had signed up at that time, yet Fianna Fail went ahead with its cynical refusal to support the system simply to win votes.

The hard left independent politicians in the Dail who started the anti-charges campaign had claimed that low income families would be hit and that it was double taxation because "people have already paid for their water.”  As we explained here before this is untrue, since the money saved when the annual local taxes that used to pay for water were abolished back in the 1970s was then spent on other services that people demanded over the years, like better schools and hospitals.

The irony of the left wing position now is that the main winners in this situation are better-off people in big houses with several bathrooms, pressure showers and extensive gardens to water.  Metering would have hit them much harder than lower income families.  Yet the left ignores this, and the fact that half a billion euro has already been spent on putting meters outside homes all over the country.

Over the past 40 years since rates (local taxes) were abolished by Fianna Fail to buy the 1977 general election, the poor state of our fragmented water system has got worse as population grew, the boom happened and demand soared. The system is now barely coping, and regular breakdowns both in the provision of fresh water and the disposal of sewage can be expected into the future until major investment happens.

Over 40 percent of our fresh water is lost through leaks from the ancient cast iron, lead, earthenware and asbestos pipes, and some of our sewage treatment plants date from the 19th century.  In many towns around the country, waste water is treated in small local plants which regularly fail or spill over into rivers, lakes or the sea when flooding occurs after heavy rain.  It's a historic problem that has continued in recent decades because there has always been more votes in opening a new school building or a hospital extension rather than a water treatment facility.

The truth is that many people only start caring about water when their taps run dry.  It takes political leadership to get these voters to see beyond this, something that both Fianna Fail and Sinn Fein have failed to show on this issue.  Instead of doing so, they have exploited it shamefully.

Metering and water charges would not only have provided Irish Water with an income stream, but would also have enabled it to independently borrow money on the markets for investment.  That scenario has now been wrecked and what lies ahead is far from certain.

More than half a billion euro from state funds is being invested by Irish Water this year, but state funding is only guaranteed up to the end of next year.  And with Brexit looming no one knows how secure that is and what may happen after that, despite up to a billion a year in water investment being needed for the next decade to fix the problem.

The sad part of all this is that although we will always have the whingers who don't want to pay for anything, most Irish people will do the right thing when they are asked.  Instead of having the problem explained to them and being being asked to make a difficult choice, they are being misled and let down by the gutless, self-serving leadership in both Fianna Fail and Sinn Fein.

The Dail, now on holiday, will be back in the autumn and this is one of the main problems the country faces.  But don't expect any immediate breakthrough.  Many more pipes will run dry and there will be many more sewage overflows before this is sorted out here.

Read more: Leo Varadkar and Justin Trudeau to march together in Montreal Pride