Irish Water has said it could be the weekend before all water supplies are returned to normal to householders and businesses in Drogheda, Ireland’s largest provincial town, and surrounding areas of counties Louth and Meath. 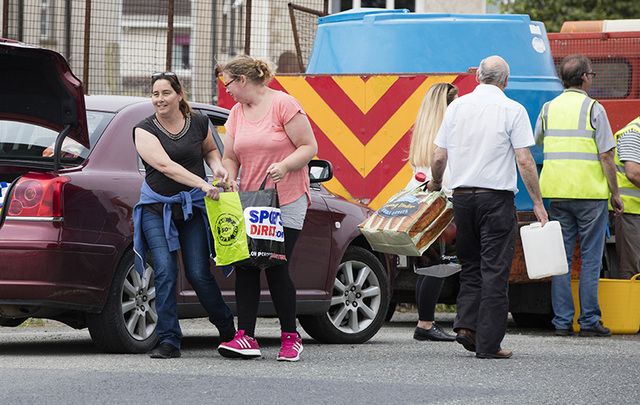 The company Irish Water has said it could be the weekend before all water supplies are returned to normal to householders and businesses in Drogheda, Ireland’s largest provincial town, and surrounding areas of counties Louth and Meath.

A crisis that started over a burst water main 13 feet below the ground last Friday and has hit 200,000 residents has been branded with one word in the front-page headline of the Irish Daily Mirror – Watergate.

Locals have complained they are unable to shower, do laundry or cook normally.

Parent Becky Wilkinson has been buying bottled water to use for sterilizing bottles for 10-week-old son Teddy who was born three weeks premature.

She said at her home in Clogherhead, Co. Louth, “On Sunday we had to travel to relatives in Dundalk to bath Teddy. Now we are being warned we may be waiting until the end of the week for a resolution.

“This is a major imposition and is adding stress when we are trying to get into a routine with a new baby.”

Water tankers are deployed in the area and Irish Water said on Tuesday it is liaising with the Defence Forces to see what support they can provide in supplying alternative water supplies.

Tankers have been replenishing supplies, with priority given to maintain water supplies to Our Lady of Lourdes Hospital in Drogheda.

Residents have complained that the crisis has been ignored by politicians as they wait for a fixture to fix the ruptured pipe to be made in Northern Ireland. They have also complained about the absence during the drought of Taoiseach Leo Varadkar.

Irish Water managing director Jerry Grant told RTE radio that because of the complexity of the piping it has not been possible to carry out the repairs in the normal time frame.

He warned that even when the water main is repaired it could take a number of days, probably until the weekend, before full supply is restored.

In a furious outburst, Meath county Councilor Paddy Meade claimed Irish Water knew the 50-year-old mains was defective last year but did nothing about it. He said the company should have been prepared for such a catastrophic leak and have the parts ready.

He added, “They tried to put on wrong fittings three times and only now have they ordered the right fittings from Northern Ireland.”

Meade dismissed Irish Water’s claim that they didn’t know about the defective main. He said, “This pipe was cracked last year. I was looking for it to be updated a year ago. So they knew well about it in advance.”

The mayor of Drogheda, Pio Smith, said the condition of the water main was well known. It had been identified for replacement in plans drawn up by the Drogheda municipal council as far back as 2011.