Leo Varadkar and Justin Trudeau to march together in Montreal Pride

The Taoiseach's bromance with the Canadian PM looks set to continue in Montreal. 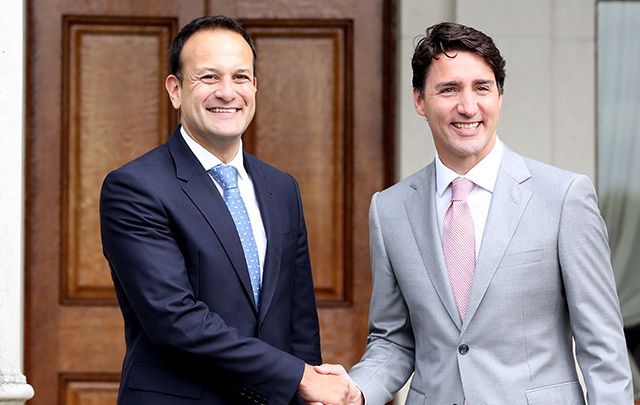 The bromance between Taoiseach Leo Varadkar and Canadian Prime Minister Justin Trudeau looks set to continue. A statement from Trudeau's office on August 15 said that Varadkar would be participating in the August 20 Pride festival in Montreal. Though the statement pushes the idea that Varadkar and Trudeau will be discussing the Canada-European Union Comprehensive Economic and Trade Agreement, it's clear the pair have a burgeoning friendship.

Trudeau said in announcing the meeting, "Ireland and Canada are close friends, and I look forward to meeting again with Taoiseach Varadkar in Montréal. Our two countries enjoy strong family ties, common values, and a shared history. Now we are collaborating again to ensure that CETA creates good, well-paying middle-class jobs on both sides of the Atlantic."

The pair's friendship was first confirmed in July 2017 when Trudeau visited Ireland. They then went on to make international news as both showed off their colorful socks to the world's media. On that day, Trudeau showed off his maple leaf socks for the day while Varadkar wore a pair of bright red ones.

After today's Dail business joined @JustinTrudeau for quick jog through #PhoenixPark. Now off to Dublin Castle for evening business pic.twitter.com/irb1nnmj9I

The day after the sock display, both politicians shared photos showing them jogging together in Dublin's Phoenix Park.

The sun came out just in time for a quick chance to see more of this beautiful part of Dublin on foot... nice pace @campaignforleo. pic.twitter.com/qQFoMxbJac

The Irish Examiner reported at the time that Varadkar had been seeking Trudeau's input on gender equality. Varadkar told the media, "Diversity is about more than gender. but diversity, in general, leads to better decision-making and we should try to have a government and parliament that looks like the country that it represents. I did seek some advice from Justin on this because I am very impressed by the fact that he has a cabinet that is gender-balanced."

In total, six of Varadkar's 34 ministers are women.

During his run for the office of Taoiseach, Varadkar cited Trudeau in one speech saying, "What I am interested in are the philosophies of the future. That’s what drives me. What I see around the world are movements around people like Macron in France and Trudeau in Canada."

According to the Canadian Embassy in Ireland, Canada imports far more goods from Ireland than they export. In 2016, $1,934,344,594 made their way to the great white north. While Ireland received $496,017,936 worth of goods. Statistics indicate that around 4.5 million Canadian people claim Irish ancestry.